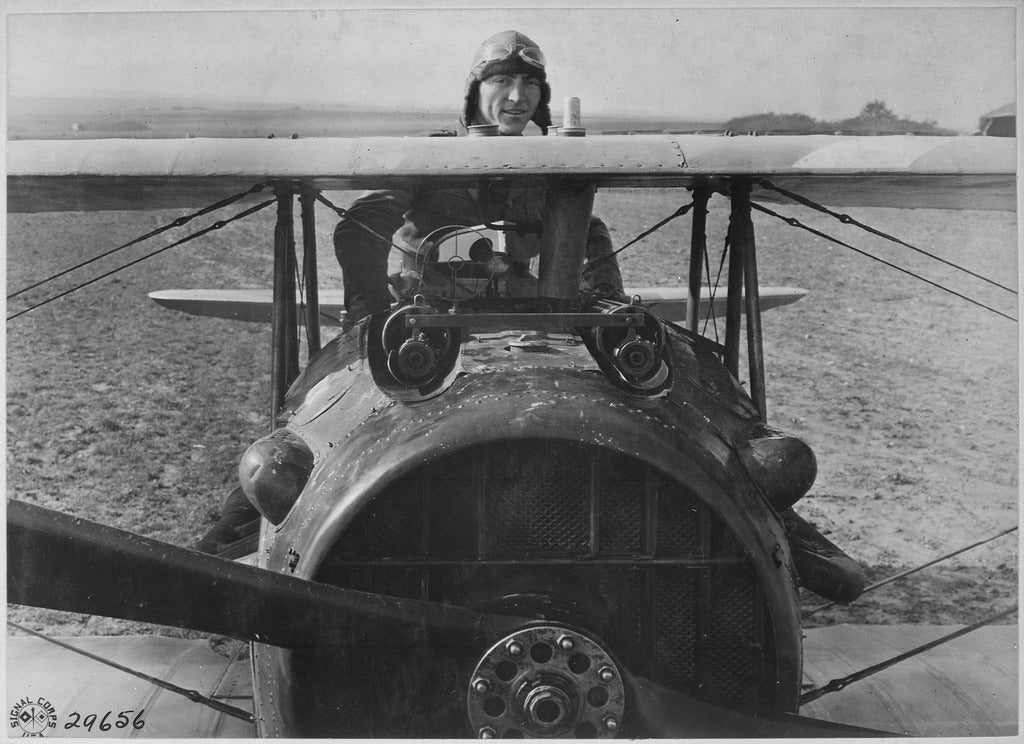 In the early 1900s, heroes didn’t get much bigger than Eddie Rickenbacker. He grew up as a poor boy in Columbus, Ohio. He lost his dad at an early age, but still managed to become a self-taught engineer, auto racing champion, and later a World War I fighter ace – not bad for a guy whose original goal was to be a machinist.

As a young man in his teens, he was an above average intellect and successful car salesman, all earned through the sweat of his work. When World War I came around, he joined the Army Air Service and excelled at that too. He would leave Europe with 26 kills, the best of any American pilot, and the Medal of Honor.

Rickenbacker was always fascinated by machines. As a youth, he built push carts, a kind of soapbox derby racecar, with his friends. He eleven toyed around with inventing small, simple machines. That fascination didn’t stop with age. He saw horses and buggies being replaced by automobiles and read about the Wright Brothers flying their airplane and was enamored with it.

To pursue this, he took a job at an automobile company to learn the trade while taking a correspondence course in engineering. By 1906, he was on the engineering team of a car competing in New York City’s Vanderbilt Cup. The car didn’t do well, but that didn’t stop Rickenbacker either.

Under the guidance of his mentor, a chief engineer, Rickenbacker took a job at the Columbus Buggy Company as a chief testing engineer himself while only 16 years old. At age 19, he became a regional chief engineer for the Firestone-Columbus Automobile Company. Before age 20, Rickenbacker had crept up the ladder of an entire burgeoning industry. That’s when he decided to get a little more action in his life.

Rickenbacker began racing cars to sell more of them. His first race as a driver ended about as well as his first race as an engineer: he didn’t even finish. But that did nothing to stem his passion for racing. He soon found himself competing in the first-ever Indianapolis 500 as a replacement driver. When his mentor was exhausted, Rickenbacker finished the race.

Within four years and with dozens of races under his belt, Rickenbacker was a nationally-known racing figure. He was highly-touted as a driver and car companies competed to get him on their team. Eventually he was sponsored by an automotive company and was able to form his own engineering team. He had turned himself into an expert and a leader at just 26 years old.

Then, the United States entered World War I. Rickenbacker had visited Britain as it fought the war and dreamed of a squadron of fighters flown by racecar drivers, who knew their stuff when it came to speed and engineering. He even took his idea to the War Department, who all but ignored him. They wanted college-educated men, not self-taught mechanics.

That’s when Gen. John J. Pershing invited him to be his chauffeur in Europe. He took the opportunity and joined as Sgt. 1st Class. Rickenbacker. Through a series of chance encounters, including one with Air Force legend Billy Mitchell, he began training to fly in France. He sat in on lectures for the Army’s trainee pilots, despite being a construction engineer. He even flew planes in his spare time.

Eventually, in January 1918, he was allowed to attend the Army’s air gunnery school. With the help of some well-placed friends, he was allowed to take off as a pursuit pilot. His first flight didn’t go well, but like his races before, that didn’t stop him. On April 13, 1918, he made his first air-to-air kill of an enemy plane.

Before the war ended in November 1918, Rickenbacker would shoot down 25 more, earn seven Distinguished Service Crosses, the French Legion of Honor, two Croix de Guerre, and the Medal of Honor.