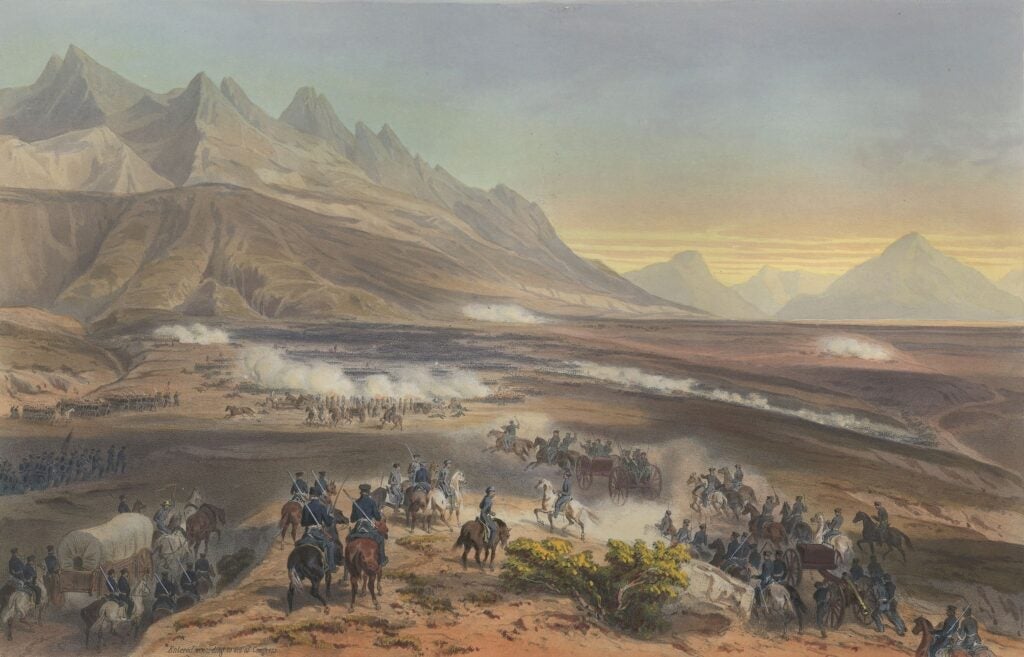 In 1845, the United States annexed the Republic of Texas, which Mexico claimed as its own. This dispute led to the Mexican-American War which was fought from 1846-1848, ending in the ceding of the modern American southwest from Mexico to the United States. Over the course of the conflict, Mexican casualties consistently measured higher than American casualties. However, one unit of the Mexican Army was responsible for the toughest battles that the U.S. Army fought during the war: The Saint Patrick’s Battalion.

El Batallón de San Patricio in Spanish, members of The Saint Patrick’s Battalion were known as San Patricios. As its name implies, the unit was composed primarily of Catholic Irish immigrants. However, other Catholic immigrants filled its ranks including Poles, Italians, Spaniards, Scots, Swedes, Germans, Canadians, Brits, Swiss, and even Mexicans. While few San Patricios were actually American citizens, many were deserters or defectors from the U.S. Army. Their motivations ranged from anti-Catholic sentiment in America and the U.S. Army to promises of better wages, citizenship, and land grants in exchange for service in the Mexican Army.

The Saint Patrick’s Battalion was led by an Irish immigrant named John Riley. Riley previously served in the U.S. 5th Infantry Regiment and deserted shortly before the start of the Mexican-American War. Along with a company of 48 other Irishmen, he manned Mexican artillery at the Siege of Fort Texas. Concurrently, the Mexican Army’s Legion of Foreigners fought at the Battle of Palo Alto, the war’s first major engagement, on May 8, 1846. Its ranks were bolstered by deserters from General Zachary Taylor’s army. Riley’s company was integrated with the legion to form The Saint Patrick’s Battalion under his command.

The San Patricios first fought as a recognized Mexican Army unit at the Battle of Monterrey on September 21, 1846. They served as an artillery unit and proved to be deadly on the battlefield. Their accurate and devastating fire turned back two to three American charges into the city. Although Mexican commanders ultimately decided to abandon the city, the Battle of Monterrey resulted in dozens of American deserters that bolstered the ranks of the Saint Patrick’s Battalion to over 700 men.

Their next engagement was the Battle of Buena Vista, on February 22, 1847. The San Patricios were assigned the heaviest cannons in the Mexican Army’s arsenal: 18 and 24-pounders. From their position on the high ground, they supported Mexican advances with extreme accuracy and decimated an D Battery of Washington’s 4th Artillery. A small detachment of San Patricios was sent to recover D Battery’s guns. After routing survivors with a bayonet charge, they returned with two six-pound cannons which were folded into the Mexican arsenal.

Infuriated by the San Patricios, Taylor ordered a squadron of the 1st Dragoons to “take that damned battery.” The squadron took heavy casualties during their attack and were forced to retreat. However, The Saint Patrick’s Battalion suffered heavy casualties of their own in artillery duels with other American batteries. Despite losing one-third of the unit killed or wounded, the San Patricios manned their guns throughout the battle. General Francisco Mejia praised them in his Battle Report writing that they were “worthy of the most consummate praise because the men fought with daring bravery.” Several Irishmen from the unit were awarded the War Cross by the Mexican government for their actions at Buena Vista.

Despite their success as an artillery unit, the San Patricios suffered too many losses and were reorganized. In mid-1847, by personal order of Mexican President Santa Anna they were mustered as an infantry battalion as well as a cavalry unit. The Saint Patrick’s Battalion was renamed the Foreign Legion of Patricios to better reflect its mix of nationalities. Command of the legion was given to Col. Francisco Moreno, with Riley commanding its 1st Company and a man named Santiago O’Leary commanding the 2nd Company.

The new unit fought its first action at the Battle of Churubusco on August 20, 1847. Ulysses S. Grant later remarked that “Churubusco proved to be about the severest battle fought in the valley of Mexico.” Defending a fortified monastery, the San Patricios set up defensive positions outside the walls. During the American attack, the combat veterans of the Foreign Legion served as an example to the Mexican militiamen fighting beside them. An ammunition shortage forced the defenders back inside the monastery and behind the safety of its walls.

The battle devolved into numerous incursions into the city by American forces with brutal close quarters fighting. At one point, an American group mistook San Patricios for friendly forces and were cut down as a result. Meanwhile, San Patricios specifically targeted American officers as a form of revenge for their time in the U.S. Army. Outnumbered and outmatched, the defenders did their best to hold back the American assault. When ammunition ran out, a Mexican officer raised a white flag. This was promptly torn down by a San Patricio officer named Patrick Dalton. Seeing this, Gen. Pedro Anaya ordered the defenders to fight on. An American private later reported that two other Mexican soldiers also tried to raise a white flag and were gunned down by San Patricios as a result.

The Battle of Churubusco ended in a U.S. victory and resulted in the deaths of 35 San Patricios with another 85 captured, including Riley and O’Leary. About 85 others escaped with other surviving Mexican forces. San Patricios who were captured were tried in two different courts-martial. Neither trials included lawyers for the defendants or recorded transcripts of the proceedings. In the end, 48 San Patricios were sentenced to death by hanging, an execution usually reserved for spies. Two others were executed by firing squad. Riley, and others who deserted before war was declared, were given 50 lashes, branded with the letter “D” for deserter, and made to wear iron yokes around their necks for the duration of the war.

Surviving San Pantricios from Churubusco fought in the Battle for Mexico City from September 8-15, 1847, the final campaign of the war. 50 even served as the bodyguard to the Mexican commander-in-chief. The battle resulted in Mexico’s defeat and the Treaty of Guadalupe Hidalgo which officially ended the war on February 2, 1848. As part of the treaty, Mexico requested that captured San Patricios be released. The U.S. agreed and dishonorably discharged all San Patricios before releasing them to Mexico. Survivors either made new lives in Mexico or returned to their homeland, mainly Ireland.

The Saint Patrick’s Battalion has been memorialized in Mexico with schools, churches, and landmarks named after them. Mexican presidents have also cited their service to the nation. Meanwhile, the San Patricios were rightfully seen as traitors in the U.S. The Army kept the existence of the San Patricios a secret to discourage other potential deserters. It wasn’t until a 1915 congressional inquiry that The Saint Patrick’s Battalion and the Army’s subsequent coverup came to light. Even so, this infamous unit that inflicted so many casualties during the Mexican-American War is rarely brought up in U.S. military history.