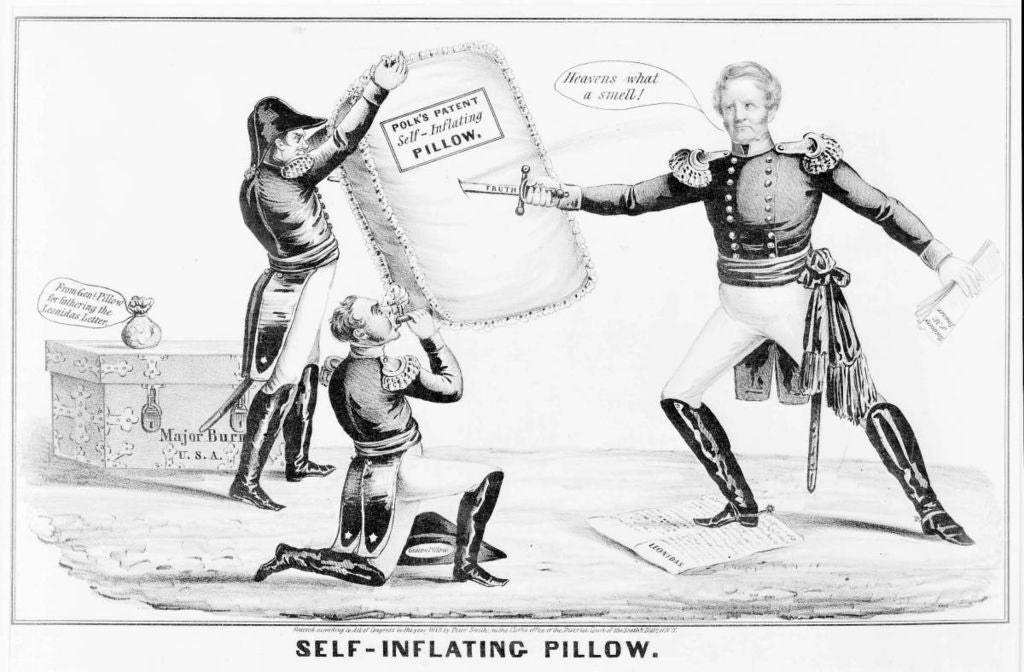 The beginning of the end for the Confederate States of America didn’t come at the capture of Richmond or even the fields of Gettysburg. It came from the west, where one Union general came to prominence for his aggression and his critical victories. Ulysses S. Grant and his leadership broke the back of the Confederacy and elevated him to the highest level of the Union Army. Grant’s rise to fame and power might never have come without those critical victories in Tennessee, and there was one inept officer whose leadership is as responsible for Grant’s wins than Grant himself: Gideon Pillow.

Pillow led a charmed life for an Army officer. He was from a prominent Tennessee family and supported James K. Polk for his presidential bid in 1844. The result of his support was an appointment as a brigadier general of volunteers when the Mexican War broke out during Polk’s Administration.

Sent to Mexico as one of Gen. Winfield Scott’s commanding officers, he did serve admirably at the Battle of Cerro Gordo, but the adulation he received after that battle inflated his sense of self-worth. He would later become known for ordering his men to entrench on the wrong side of of the battlefield at Camargo and then he tried to take credit for the American victories at the Battles of Contreras and Churubusco.

The last action put him at odds with his commander, Winfield Scott, who court-martialed Pillow for insubordination regarding his accounts of the battles. In fact, the battles were won by Scott’s command and leadership in spite of Pillow’s bungling during the fighting. Pillow then sent an “anonymous” letter to a New Orleans newspaper, claiming credit for the battles.

When the situation was taken to Pillow’s friend President Polk, Polk relieved Scott of his command. After an inquiry, both men were exonerated and Polk believed Scott was persecuting Pillow for his political views. So when the idea of Civil War began boiling over, Pillow’s reputation as a military mind was still intact.

Tennessee seceded from the Union in June 1861 and Pillow was named commander of the Provisional Army of Tennessee. His first taste of the Civil War came that November, where he fought Ulysses S. Grant for the first time. At the Battle of Belmont, Missouri, Pillow ordered his men to attack Union troops in a tree line, from which they could slaughter the Confederates from adequate cover.

The only reason Belmont was considered a Confederate victory is because the Union troops broke their discipline in attacking Pillow’s camp and were pushed back across the Mississippi River. His biggest mistake was yet to come.

Pillow’s next command came at the defense of Fort Donelson. He and two other generals were surrounded by Grant’s forces at this critical juncture protecting the Cumberland River. The Confederate plan was to surprise the surrounding Union forces and break through the lines before a full siege could be put in place. Once outside the siege lines, they could rejoin a larger force near Nashville and relieve the siege.

The surprise worked and Pillow’s forces had the break they were looking for, but Pillow ordered his men to stay in the safety of the fort rather than march on, erasing any gains made that day. It was decided that the Confederate would surrender the fort and its forces, but Pillow and other ranking officers escaped from the fort the night before.

One of the reasons Grant assaulted the fort at all was because he knew Pillow was in command and it would be an easy target. The rest of the war didn’t go well for Gideon Pillow either. He was never given anything higher than a brigade-level command, and even then he was found cowering behind a tree during the Battle of Stones River.

Grant, on the other hand, caught notoriety for his command of the battles as well as the attention of President Abraham Lincoln. He was hailed as a hero and given the nickname “Unconditional Surrender” Grant by the American press. He was also promoted above his contemporaries, eventually elevated to command of the entire Union Army.