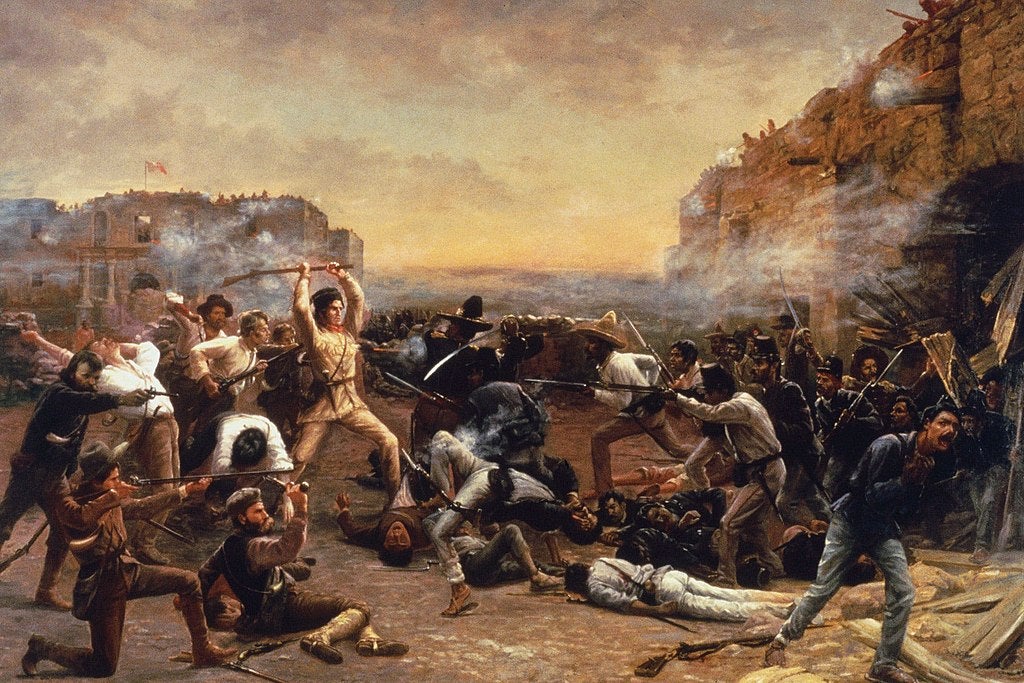 The Fall of the Alamo (1903) by Robert Jenkins Onderdonk, depicts Davy Crockett wielding his rifle as a club against Mexican troops who have breached the walls of the mission.

In 1835 a revolution took place in Mexico, literally and figuratively. It enacted a new constitution under President Antonio Lopez de Santa Anna, one intended to address the country’s ongoing stability issues, collect taxes and tariffs, and handle an influx of immigrants in its border areas. With a new central government enforcing its laws equally – especially anti-slavery laws – the residents of Mexican Texas began a revolt. Calling themselves Texians, they pushed the Mexican Army out of the area and occupied an old Spanish mission, the Alamo, as an outpost. It would be the first target of Santa Anna’s Mexican Army when he came to subdue the Texians. He attacked the Alamo with 2,000 troops, killing every defender inside.

Texian leader Sam Houston kept his army moving while maintaining an intense training regimen. The well-trained and mobile Texians were able to surprise Santa Anna’s army at the Battle of San Jacinto, capturing the Mexican leader and winning the war. The whole rebellion took just over six months – but why?

During his march to the Alamo, Santa Anna disregarded the logistics necessary to move the men and materials he needed to fully subdue Texas. He marched inland toward the Alamo, rather than move along the coast, where his army might have been resupplied and reinforced. His army did not have an adequate supply train, the army’s camp followers consumed what supplies they did have, and Comanche raids decimated his forces.

The result was the Mexican Army lost hundreds of men by marching directly to San Antonio. When they arrived, they were wracked by hypothermia, dysentery, and exhaustion. When it came time to attack the Alamo, he lost more than a quarter of his remaining army by ordering frontal assaults.

Time and again, the Mexican general would dispatch portions of his main force, dividing his army in attempts to harass civilians, capture the Texian government, or engage smaller forces, just to name a few.

In pursuing Houston’s army, Santa Anna believed the rebellion was in its last stages. In his haste to block Houston’s retreat, he acted on bad intelligence. When the Texians learned where all the Mexican troops were along with their entire war plan, they were actually on the heels of Santa Anna’s divided forces.

While the victory over the Alamo might have been a high point for Santa Anna and his army, killing every last defender was a critical error, one he would make again at Goliad. Goliad was different, however. Defenders of the Alamo were not expected to survive the battle if they lost. At Goliad, the Texians were promised fair treatment as prisoners of war. Instead, they were executed.

The massacre at Goliad galvanized the Texian independence movement and caused hundreds of new volunteers, Americans, Tejanos, and others, to flock to Houston’s army with the sole purpose of defeating Santa Anna and perhaps saving their own lives. Houston was still outnumbered, but his forces were motivated and – eventually – trained for combat.

As a general, Santa Anna never respected the Texian Army enough to gather intelligence on its true strength. All he knew was that his side was winning. When the Texians were forced to meet him on an open field of battle, he won and didn’t seem to care why. Complacency kills, and eventually Santa Anna got complacent, strategically and tactically.

At the Battle of San Jacinto, Santa Anna had allowed his men to rest, eat, and even sleep. Much of the army hadn’t fortified their positions before resting, which allowed the Texians to cut off their avenue of retreat, surprise the Mexicans, and use the outrage over the killing of Texians at the Alamo and Goliad as motivation for overrunning what defenses they did have. After just 18 minutes of fighting, the battle ended and Texas had won the war.