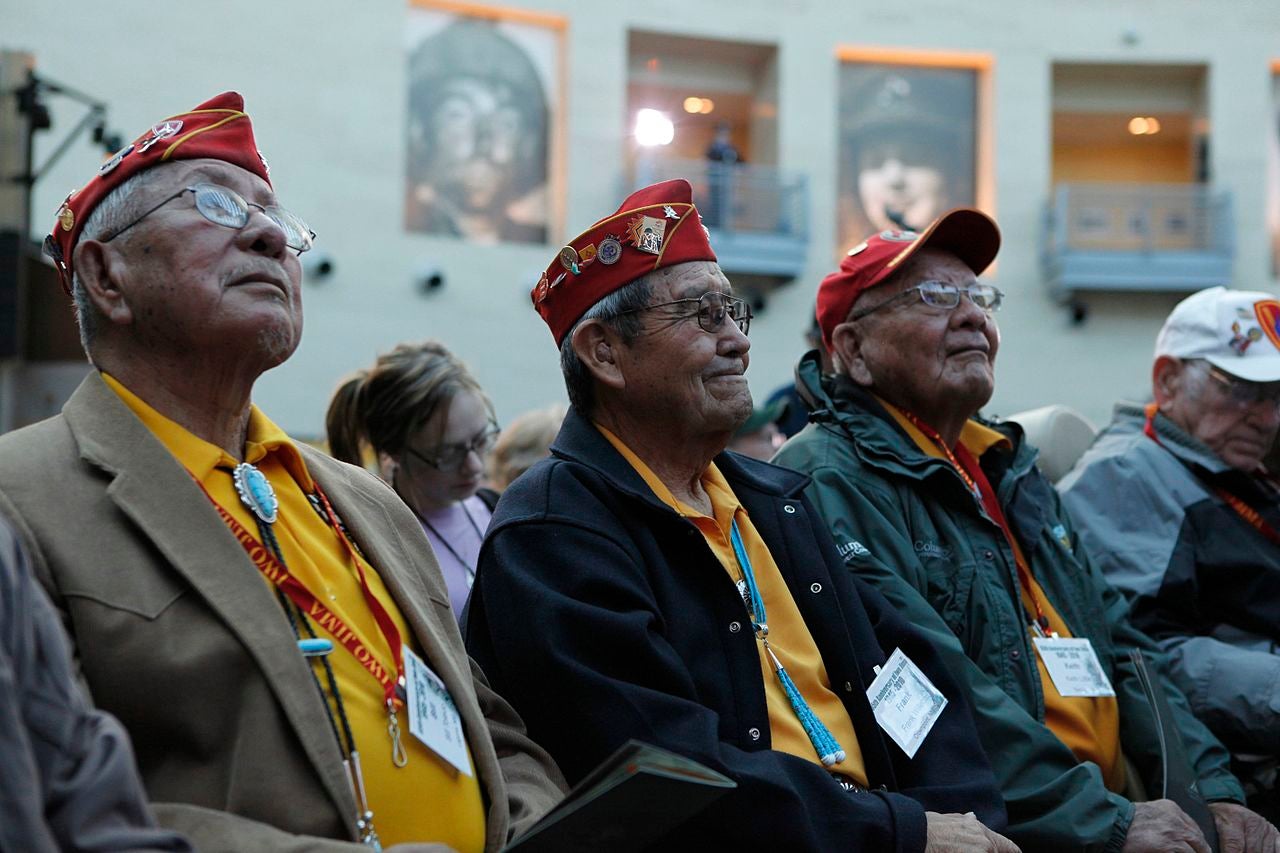 Bill Toledo, Frank G. Willetto and Keith Little, Navajo Code Talkers, were among the Iwo Jima veterans honored Feb. 19, 2010, at a ceremony commemorating the 65th anniversary of the Battle of Iwo Jima at the National Museum of the Marine Corps in Triangle, Va. On Feb. 19, 1945, the United States launched its first assault against the Japanese at Iwo Jima, resulting in some of the fiercest fighting of World War II. (Wikimedia Commons).

Let’s get one thing clear – the name of the Navajo Code Talkers Day holiday has less to do with the Navajo tribe itself and more to do with the broader term that encompasses the “Navajo Code” used to help fool the fascist Nazis and imperialist Japanese during WWII.

The traditional role of an Indigenous “warrior” involved more than just fighting enemies. Warriors were men in communities who cared for people and helped during times of difficulties and were committed to ensuring their tribes survived. Because warriors were regarded with so much respect, boys trained from an early age to develop the appropriate mental, emotional, and physical strength required of warriors. Many tribes had several specific warrior subgroups within their communities, which had their own ceremonies and ways of life. The warrior tradition was integral to Indigenous life, and it was this call that encouraged many Indigenous people to serve in the military. In addition to wanting to defend the United States, the military offered economic security and a way off the reservation, an opportunity for education, training, and travel.

More than 12,000 Indigenous American Indians served in WWI, about 25 percent of the male population at the time. During WWII, an estimated 44,000 men and women served.

Navajo Code is thought to have been established from the many conflicts experienced by Indigenous people. The earliest reports of the relationship between Code Talkers and the military can be found during WWI when the Choctaw tribe language was used to relay messages related to surprise attacks on German forces.

WWI veteran Philip Johnston understood the value of code talkers and suggested that the USMC use a similar communication strategy for WWII efforts. Though he was not Indigenous, Johnston had grown up on a Navajo reservation and saw the success of the Choctaw efforts in WWI.

During the war, more than 400 Navajos were recruited as Code Talkers, and their training was intense. Some Code Talkers enlisted while others were drafted, but the majority of all Code Talkers served underage and had to lie about their age to join. At the height of the Code Talker involvement in WWII, there were service personnel from more than 16 tribes.

Many of the Code Talkers recruited simply used their tribal languages to convey messages. These were known as Type-Two Codes.

In 1942, the Marine Corps recruited the entire 382nd Platoon to develop, memorize and implement the Navajo-coded language. This language became one of many Type-One codes that translated English into a coded message. A Type-One code combined the languages of the Navajo, Hopi, Comanche, and Meskwaki.

To develop the Type-One code, the original 29 Navajo Code Talkers first decided a Navajo word for each letter of the English alphabet. To keep things simple, the Code Talkers decided to associate words with animals that were familiar to them. Here’s an example of the words they used:

Code Talkers were also required to develop specific military-related words for planes, ships and weapons. After looking at these items’ images, the Code Talker squad came up with words that seemed to fit the pictures.

To transmit code, a Code Talker was given a message in English, which was then translated and sent to another Code Talker. To avoid detection, none of these messages were written down until they were received.

Code Talker needed to be intelligent and brave to ensure some of the most dangerous battles and remain calm under fire. They served proudly and with honor and distinction, and their actions provided critical support in several campaigns in the Pacific and are credited with saving thousands of fellow Americans’ lives. The Navajo and Hopi served in the Pacific in the war against Japan, while the Comanches fought the Germans in Europe and the Meskwakis fought the Germans in North Africa. Code Talkers from other tribes served in various locations throughout the European and Pacific theaters. There are very few Code Talkers left alive today, but it’s clear that the outcome of WWII would have been much different without their efforts.