The complete post guide to Fort Leavenworth - We Are The Mighty 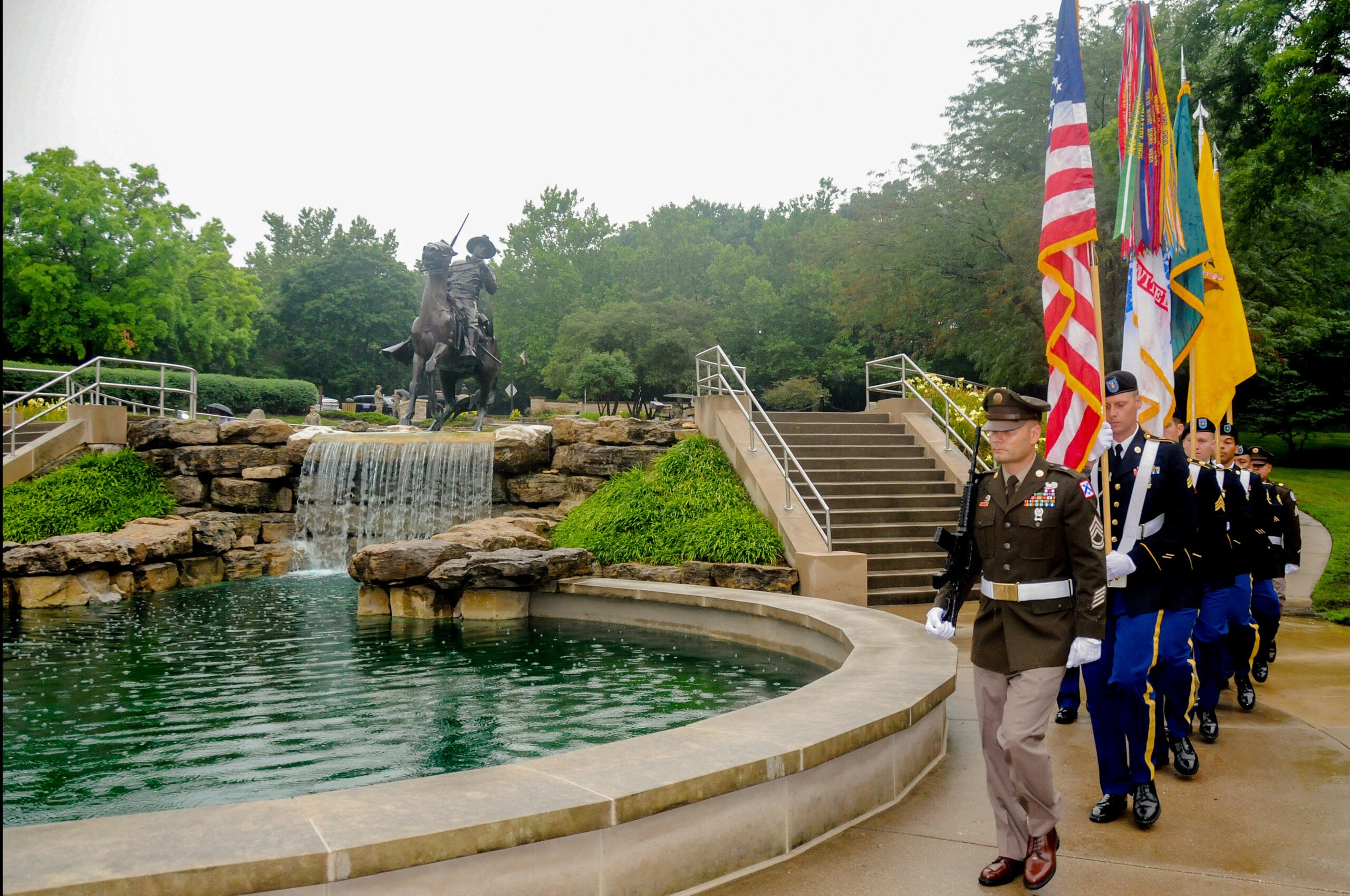 A color guard team prepares to post the colors at the start of the 30th anniversary of the dedication of the Buffalo Soldier Monument. (U.S. Army photo).

Ft. Leavenworth is the second oldest active Army post west of Washington, D.C.! It’s also the oldest permanent settlement in Kansas, so no matter where you look, you’re going to find some history. Speaking of history, lots of folks contend that Leavenworth is haunted. In fact, it’s  considered one of the most significant historic military installations in the Army. The posts’ 5,634 acres contain a 213-acre National Historic Landmark District (NHLD), which was established in 1974.

For years, Leavenworth has lovingly been referred to as the “Intellectual Center of the Army,” because the post supports TRADOC by maintaining the Army Combined Arms Center. It’s also home to the Military Corrections Complex, including the DoD’s only max security prison where lots of high profile military criminals end up. Aside from that, Leavenworth is home to the Foreign Military Studies Office and the Army Command and General Staff College. Regardless of whether or not you call it the Sunflower State or the Wheat State, a posting to Leavenworth is sure to be exciting. Housing is decent, the weather is … interesting, and there’s a decent amount of stuff to do – if you know where to look.

Ft. Leavenworth is located in Leavenworth, KS, along the Missouri River. The fort is strategically located in roughly the center of the United States. It is the oldest Army post west of the Mississippi River.

Fort Leavenworth can be reached by car using the following routes.

Ft. Leavenworth is relatively centrally located in the United States. That means driving will be relatively easy from any location. Having a vehicle would allow you to easily visit nearby Kansas City. Otherwise, you might be stuck on post.

Because it’s the intellectual home of the Army, Ft. Leavenworth’s main mission is to educate, train, and inspire the Army’s next generation of leaders. To deliver diverse and quality services, as extraordinary as the people we serve, to foster a sense of belonging. Furthermore, Leavenworth seeks to be the driver of change to create a multi-domain operations-capable Army by 2030.

Also at Fort Leavenworth is the Munson Army Health Clinic (MAHC), the Smith Dental Clinic, and a Veterinary Treatment Facility (VTF). Additionally, there are plenty of MI and MP units, too, including the 902nd Military Intelligence Group and the 15th MP Brigade, the 40th MP Brigade, and the 705th MP Brigades.

Built in 1827 to protect the Santa Fe Trail, Fort Leavenworth was originally called Cantonment Leavenworth and began with only 14 officers and a few hundred men.

Leavenworth played a vital role during the Civil War as the home of Camp Lincoln, a training center for volunteers.

After, it served in peace-keeping capacities between Indigenous tribes and the large number of settlers heading west.

Later, the War Department established the Disciplinary Barracks in 1875.

Then in 1881, Gen. William T. Sherman established the School of Application for Cavalry and Infantry. That school evolved into the U.S. Army Command and General Staff College.

Things to Do Around Fort Leavenworth

If you’re thinking BBQ, you’re correct! Kansas is known for lots of different foods but the standout star is, by far, barbecue. But, if you’re ready to try something outside the box, be sure to seek out bierocks. German settlers brought them to the Sunflower State way back. They’re pockets of dough filled with ground beef and cabbage and surprisingly addictive.

Speaking of dough, make sure you don’t skip the grebble! It’s a savory deep-fried bread that will forever change how you think about fried foods.

When it’s time for dessert, why not try a sour cream and raisin pie? It might sound like a strange flavor combo, but trust us. One bite and you’ll be hooked.

Richard Allen Cultural Center (0.4 miles) focuses on recognizing and preserving African-American heritage. The center offers exhibits, tours, and research opportunities. It’s located across the street from the historic Bethel AME Church, which was part of the Underground Railroad.

Kansas City Zoo (40.3 miles) is home to more than 1,700 animals and is over 200 acres. A world-class zoo with animals from around the globe, including penguins, polar bears, elephants, tigers, and more!

You have plenty of housing options when you call Leavenworth home! Of course, all single service members ranks E1-E5 have to stay in the barracks. However, don’t expect to find lodging in summer months.

Call the Military Housing Office for the most current information as soon as you receive orders.

Like a lot of DoD installations, an independent company ensures quality housing is available to service members and their families. At Leavenworth, Frontier Heritage Communities owns and manages all housing. The company offers several different types of neighborhoods to suit your needs. Wait lists can be long, so calling the MHO as soon as you get orders is ideal. Find out more about potential options here.

Mil-kids have tons of options when it comes to schools.

Similarly, grades 10-12 have their own school, too. These students attend Leavenworth High School (USD 453) in the city of Leavenworth.

Is Fort Leavenworth a good place to live?

That’s definitely a personal decision, but most who have spent time at Leavenworth call it the “Best Hometown in the Army”!

Where Is Fort Leavenworth?

Fort Leavenworth is located in Leavenworth, KS, along the Missouri River.

Of course! Fort Leavenworth encourages civilians to visit their historic post. Don’t forget your government-issued ID and plan to stop at the Visitor Control Center first. All vehicles must have current tags, proof of insurance, and registration.

What Schools are Near Fort Leavenworth?

If you’re looking for K-12 Schools, you’ll find several districts on and near post. Check out our school section up top!