The lore of the "lost Confederate treasure" - We Are The Mighty

The lore of the “lost Confederate treasure” 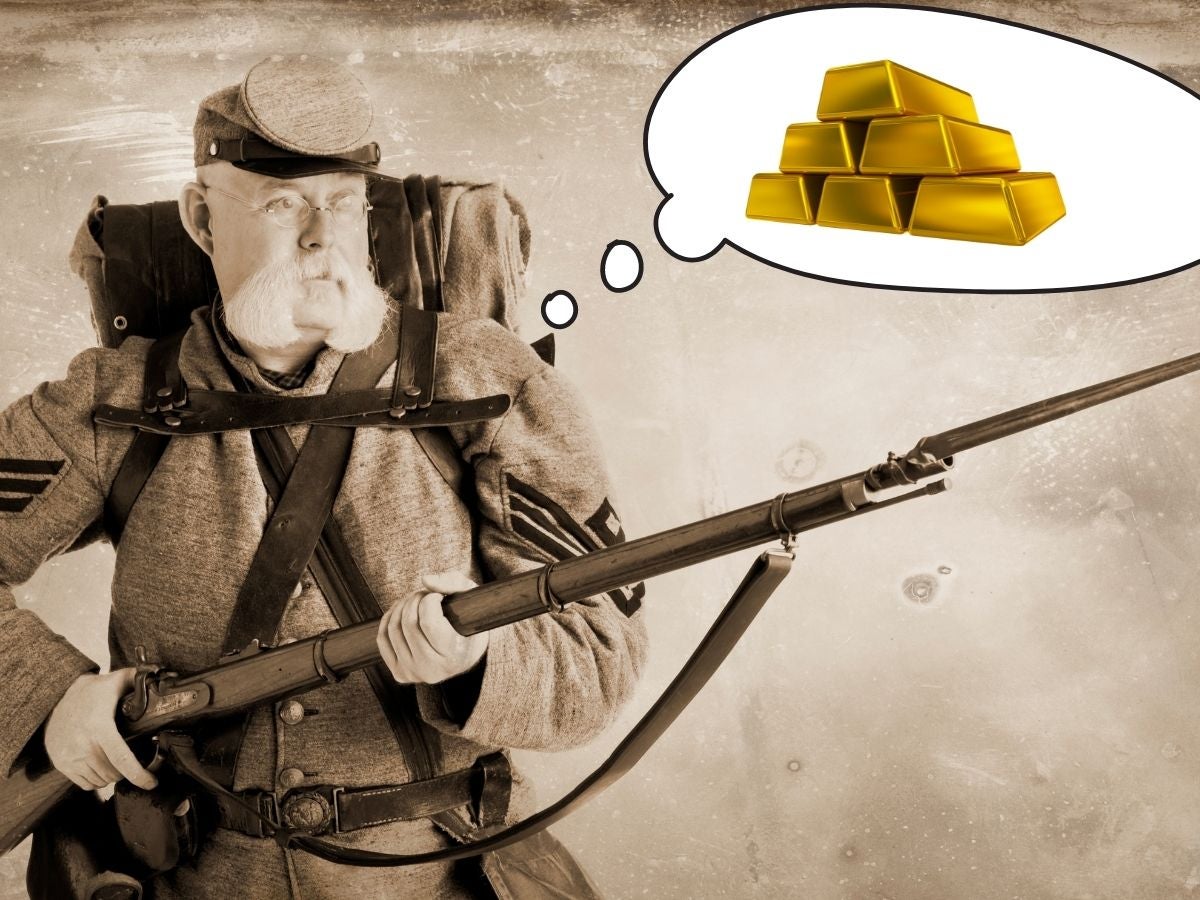 There have long been myths about buried treasure and Confederate soldiers. It’s said that Mary Lee herself buried family valuables before fleeing what would eventually become Arlington National Cemetery. Meanwhile, families stashed goods before leaving their homes for safety. Stories about soldiers of the South fleeing with chests of valuables have been passed from generation to generation. Gold coins, money and other personal belongings were said to be packed up and stashed for safekeeping as Union soldiers overtook their stations. But perhaps no tale is as big as the entire Confederacy’s treasure … and what became of it.

If there is any truth to it, however, remains to be seen. But if so, if there was a long-lost treasure, what happened to all of the goods anyway?

Let’s take a look at these reports and follow along for a better glimpse of what happened to these key valuables during the Civil War.

Gathering of the treasure

It’s said Confederate soldiers left Richmond, VA in a hurry. As the capital of the Confederacy and holding the party’s entire financials; Richmond held many key valuables, including their currency. On April 2, 1865, the Union reached Richmond. Confederate forces were tired and exhausted from the fight. Lee realized the front was lost, and send word they needed to flee, as the fall of their capital was only a matter of time. He instructed President Jefferson Davis to leave as soon as possible. Davis and other government officials set out for Danville, VA.

Late that night they left by train, holding the South’s hard currency for the Confederate States of America. Accounts list hundreds of containers that held jewelry (donated by Southern women for their value), and gold and silver. An additional $450,000 in gold was brought from bank reserves as well. In all, it’s estimated that approximately $1 million traveled by train with the Confederate government members. However, as Confederate records were burned as Richmond was seized, an exact amount is unknown. Some say that several million were taken by train to an alternate location.

But here’s where it gets tricky. There’s no account of them arriving — they certainly arrived somewhere; the war was not surrendered for several more weeks. But the whereabouts of their valuables gets muddled.

The rumor mill went wild when Jefferson Davis himself was captured some six weeks later and found without the well-known funds. People began passing stories of transients who stole the funds and ran. The value was inflated and stories abounded.

In modern times, the speculation hasn’t ended. There are countless rumors and movies that tell about searching for the treasure. Stories of buried gold waiting for the South to rise again, outlaws on a mission to get rich quick, or good-old-boys clubs who simply kept mum to keep the gold out of certain hands. The treasure is mentioned in Gone with the Wind, The Good, the Bad and the Ugly it’s found in a cemetery grave, in Timecop it’s hijacked via laser-sighting, in Sahara it was taken to Africa, and in the TV show Alcatraz the gold was found buried underneath the famous prison. And so on.

But where did it really go?

Confederate States of America’s Secretary of Treasury, George Trenholm, was arrested by the federal government for allegedly stealing the gold, but was later acquitted.

Other accounts state that Union soldiers took the goods for themselves upon capturing Jefferson Davis and other treasure-carrying soldiers. Other tales say it was lost over Lake Michigan, being forever sunk at the bottom of its banks. Some $86,000 was supposed to be smugged to England, but supposedly never made it across the pond. Other accounts tell of armed horse-riding robbers who grabbed coins from trains.

All-in-all, there’s no account of what actually happened to the treasure. Only speculation and an unlimited amount of stories. Perhaps all of the above is true and, little-by-little it was whittled away. Maybe it’s still out there, waiting to be discovered. The only thing we can count on to be true is that it is, indeed, a mystery.