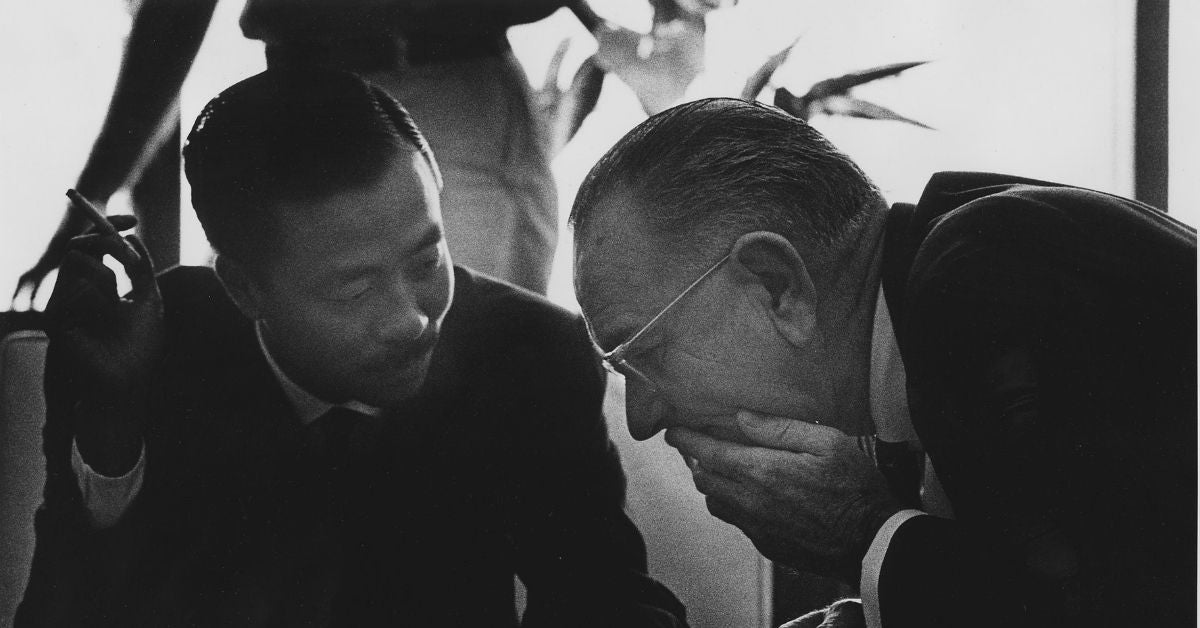 Nguyễn Cao Kỳ with Lyndon Johnson during the Honolulu summit in Hawaiʻi in 1966 (White House).

In the earliest days of American involvement in Vietnam, The U.S. put its faith in South Vietnamese President Ngo Dinh Diem, but few others did – especially inside South Vietnam’s government. One of Diem’s more untrustworthy ministers would end up toppling the Diem regime: Nguyen Cao Ky.

Ky grew up in Vietnam and eventually became a pilot for the French-backed colonial government. After the French left Vietnam, he continued his service in the newly-created South Vietnam Air Force. By 1963, U.S. President John F. Kennedy began to involve the United States in the defense of South Vietnam from Communist aggression in cooperation with President Ngo Dinh Diem.

In November of 1963, plotters unhappy with the way Diem was treating the Buddhist population of South Vietnam topped his regime and killed him. In place of the Diem government, they built a military junta. For two years, the south faced coup attempt after coup attempt and Nguyen Cao Ky, as leader of the air forces, was instrumental in their success or failure.

By 1965, Ky decided to stop being the key player in coup attempts and seized power for himself. Ky was a hard fisted leader and quick to put down any further coup attempts. As the political situation in South Vietnam stabilized, the Americans began to give Ky their full support.

Ky ran South Vietnam as Prime Minister for two years before setting up an election in 1967. Ky decided to run as vice-president with Nguyen Van Thieu as president. The Ky regime rigged the election and agreed to a backroom power sharing agreement. Ky would set policy as vice-president while Thieu was the public face of the government.

American involvement in Vietnam was advancing rapidly by 1967. The number of U.S. troops in the country had swelled to more than 380,000. Ky had the support of both President Lyndon B. Johnson and the U.S. Army and Marine Corps commanders on the ground. Outside the United States, however, Ky began to develop a public relations problem.

He routinely traveled abroad in an effort to shore up support for South Vietnam’s struggle against communism but officials in some countries saw his regime for what it really was: a brutal dictatorship. U.S. support for Ky was the most important thing, however, and despite his policies toward Buddhist minorities, for the most part, he brought stability to South Vietnam by any means necessary. That was all the Americans wanted to continue their involvement there.

As time went on, Ky’s power as vice-president began to wane and President Nguyen Van Thieu began to assert his presidential authority. After the publicly embarrassing performance of South Vietnamese troops against North Vietnam’s 1968 Tet Offensive, Thieu began to purge Ky’s supporters from the army and the government.

Ky’s last chance at retaining power would be the election of 1971, but Thieu had consolidated so much power Ky knew the elections would be rigged and had no chance of winning. He decided to retire instead.

The American government soon withdrew its forces and by 1975, the city Saigon was about to fall. Ky escaped to the United States aboard the USS Blue Ridge. He settled in the city of Westminster, California, where he ran a local liquor store. There, he penned two books about his career and the fight for South Vietnam.

In 2004, Ky returned to Vietnam for the first time since the fall of Saigon, the first former South Vietnamese leader to do so. He eventually relocated there for good. Ky died in a hospital in Malaysia in 2011.