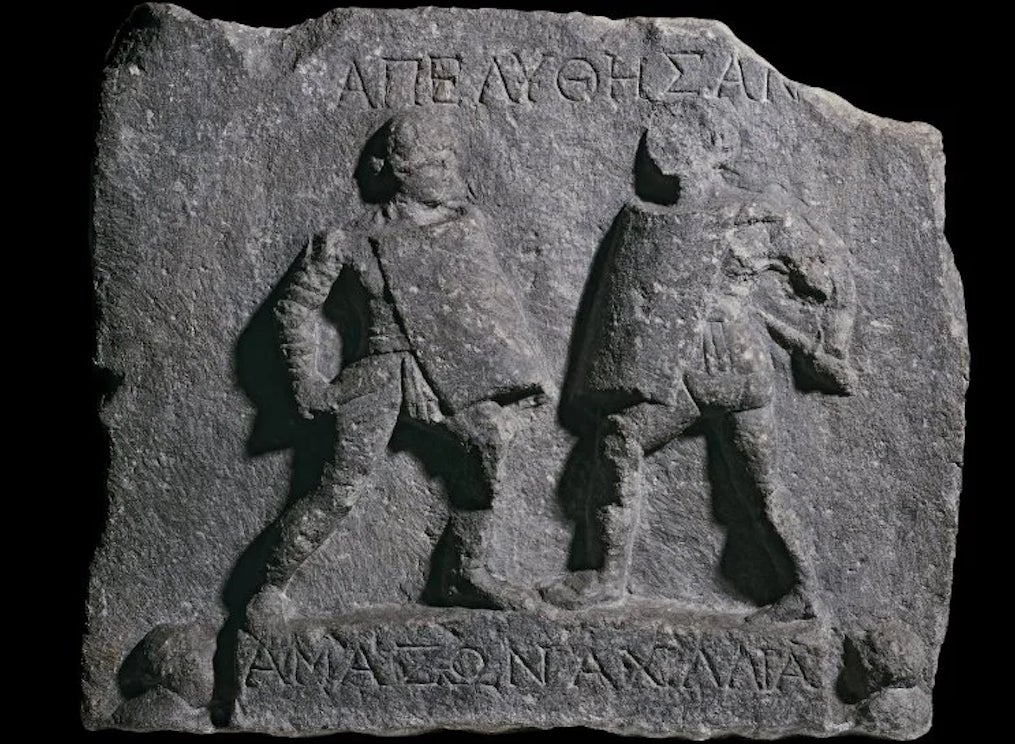 Relief of paired fighters, Amazonia and Achillea, found at Halicarnassus. Their name-forms identify them as female. (Public domain).

Roman gladiators are regarded as some of the most significant masculine figures in history. Most are aware of the famous gladiator, Spartacus, who fought diligently in Ancient Rome. However, not many are familiar with female gladiatrices narrated by modern historians.

These female gladiators fought in the Colosseum, but most decided to fight willingly and not as slaves. Although it was not uncommon for them to be underrated, it is unsurprising that these women were equally skilled as their male counterparts.

The female gladiator who chose the arena life seems to have been inspired by a deep longing for independence, financial rewards such as debt remission, and a chance at fame. Some, like Achillia and Amazon, made an excellent name for themselves.

Even though women gave up some respectability as soon as they stepped foot in the Colosseum, evidence firmly insists that there were gladiatrices who were honored on par with the male gladiators.

Some of the most popular gladiatrix depictions can be located in the British Museum. The old piece found there is a circa second-century marble relief from the Halicarnassus City, presently Bodrum in Turkey. The piece depicts two women armored while holding swords, appearing as though they were in a fighting process.

These two women are Achillia and Amazon, and most studies suggest that similar to the majority of gladiators, they were enslaved. However, these names were not traditional; they connected their status as gladiatrices. Achillia represented the famous Greek hero Achilles, and Amazon portrayed the Amazons, who were mythical female warriors. There is not much known about Achillia and Amazon except that they fought very courageously that their fight ended up as a draw, making them both win the prizemoney.

The name Achillia seems to have been twitched from Achilles, wherein the Achilles legend, he is fighting in a war and kills a woman called Penthesilea, who was the Amazon’s queen. Immediately he kills her, he observes how beautiful Penthesilea is and envisions a potential life with her but he gets heartbroken.

The battle between Achillia and Amazon was fundamentally a re-enactment that enabled them to have a happy and honorable ending. These female gladiators who participated in the gladiator games were depicted to be the daughters of retired gladiators who extensively trained them. The gladiatrices fought topless and only wore a loincloth. They would carry a shield and sword for protection of attacks in their exposed areas.

Women who went on with the gladiator life found it very challenging to be entirely accepted in society. An instance is how female gladiators were mainly used for entertainment when Emperor Nero sought to excite King Tridates I of Armenia, who visited him.

A few years later, Emperor Titus incorporated the duels between the female gladiators at the Colosseum’s grand opening. The part that stole the show in this great event was when a female gladiator killed a lion which gave Titus an impressive feat that took his reputation as the host of games a notch higher.

For a long time, the patriarchy has regarded women as second-class citizens; however, it does not signify that each woman went on with that status. Achillia and Amazon portrayed that fact when they stepped foot in the Colosseum.

The women in Rome had very little freedom and were praised for their married life at home. Their virtues, unlike men, were a sense of decency, sexual fidelity, devotion to family, love for the husband, fertility, marital concord, beauty, happiness, and cheerfulness. As such, being a female gladiator was something out of the norm, making it spectacular.