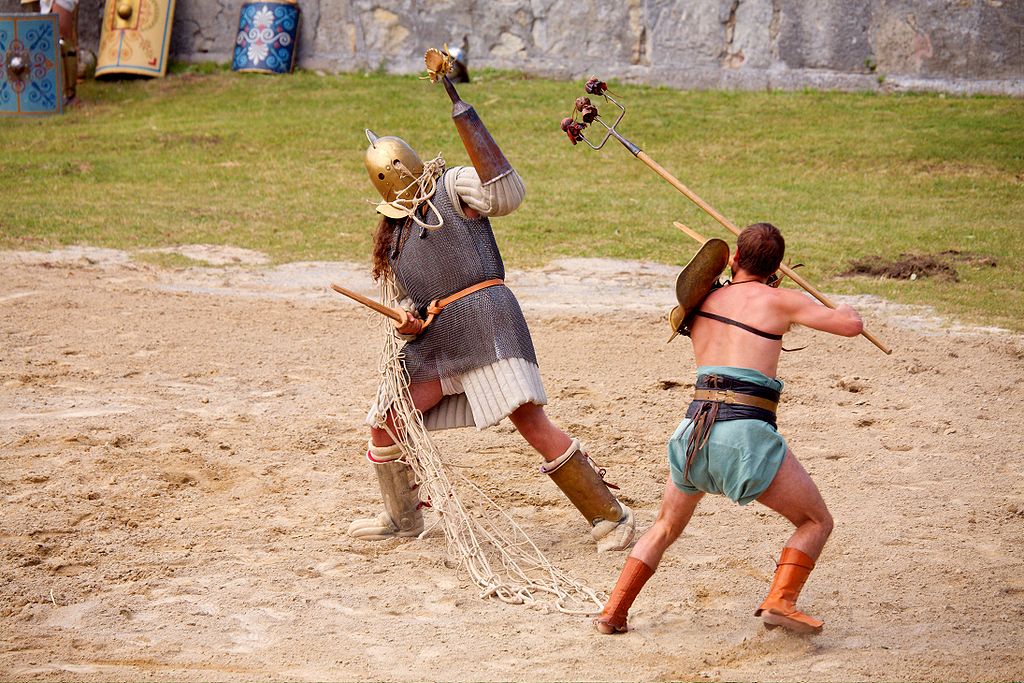 In this mock gladiatorial fight at Carnuntum, Austria, the scissor (left) is wearing a conical arm guard used to snag away the net of the retiarius (right).

The most famous ancient Roman figure known as the gladiator was widely regarded as the warrior who greatly fought against criminals, other gladiators, and even beasts. Consequently, the gladiators grew to be significantly mythologized figures.

Ideally, the gladiators led fierce, dangerous lives and were at the mercy of their commanders as they were used for entertainment. Fortunately, some were able to triumph these circumstances and eventually became celebrities; however, they were a minor community.

Several kinds of gladiators were recognized and differentiated from each other by the armor they wore, the weapons they employed, the fighting styles incorporated, and the events or situations at which they fought.

The Retarius were the famous gladiators who utilized a trident and a huge net. Additionally, they wore less heavy armor with no shield, and their fighting style included trying to trap their enemies under their net and stabbing at them with the help of their three-pronged spear.

The Murmillo were the gladiators who wore very heavy armor and used a huge, oblong shield and a sword known as a gladius. One thing that stood out with them was the full-cover helmet ornamented with a fish-shaped crest. The Thrace, who wore armor similar to the Murmilo, worked with a smaller rectangular shield accompanied by a curved Thracian sword. Moreover, their helmet covered their whole head but was ornamented with a griffin.

The Essedarius, on the other hand, were recognized as mounted gladiators, and there is barely any information about them except the fact that they wrestled while mounted on chariots.

Lastly, the Hoplomachus, which in Greek is translated to ‘armed fighter,’ were gladiators who fought with a short sword, a throwing spear, wore a plumed helmet and a small round shield.

The Retiarius, whose plural is Retiarii, was known as the ‘net men’ and normally fought with weapons displayed on the gears of a fisherman. They specifically and solely wore armor on the shoulder and arm, exposing the head and legs.

They mostly fought the Murmillo and the secutor or one another. A Roman satirist referred to as Juvenal defines a disgraced nobleman known as Gracchus who greatly trained as a retiarius since he was very proud to employ offensive weapons or wear defensive armor and declined to wear a helmet he believed would have covered his shame.

On the other hand, the Artemidorus stated that men who anticipated battles with the Retiarii were certain to locate a poor and malicious wife, roaming about ready for any man who sought her.

The Retiarii carried short, quilted tunics, a weighted net known as the Retes, which was used to trap the enemy, a metal shoulder piece referred to as the Galerius and a very long, three-pronged trident which was flung like a harpoon known as the Fascina.

How the Retiarius fought

The net-fighter filled up for his absence of protective equipment by employing agility and speed to avoid his enemies’ attacks and being patient, waiting for the right opportunity. He would first attempt to throw his net over his opponent, and if this attempt succeeded, he immediately attacked with his trident while his enemy was entangled.

Another method was to entangle his opponent’s weapon in the net and quickly take it out of his grasp, rendering the enemy defenseless. The Retiarius depended on his dagger and trident to complete the fight.

The trident allowed the gladiator to jab rapidly and keep his distance. It was a powerful weapon capable of imposing piercing wounds on an exposed limb or skull. The Retiarius’ last backup was the dagger if the trident was lost. It was kept aside when a straight wrestling match or close combat settled the attack.