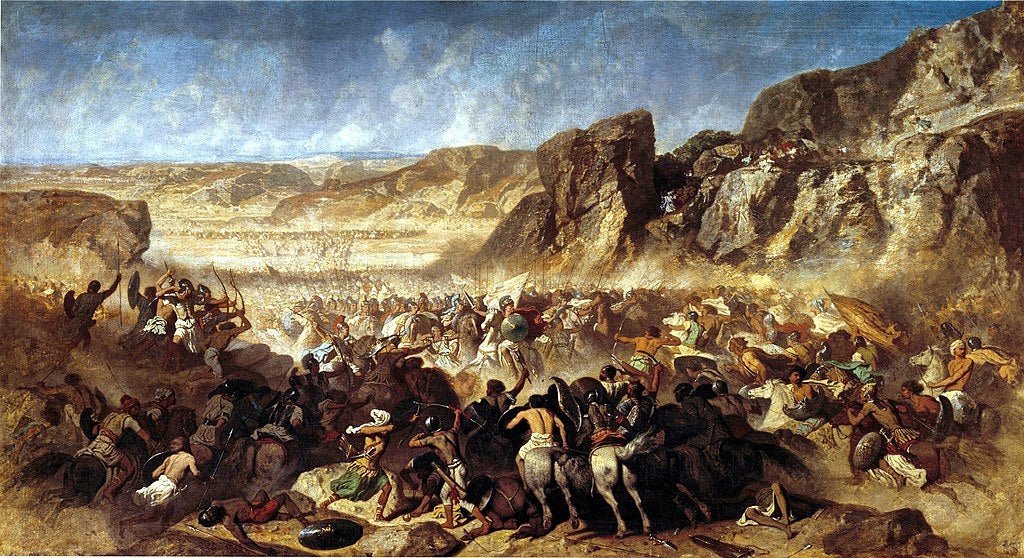 The Battle of Cunaxa fought between the Persians and ten thousand Greek mercenaries of Cyrus the Young, 401 BC. Louvre, Paris.

Military contractors like the ones used in Iraq and Afghanistan may seem like a new concept but mercenaries have been used alongside professional armies for centuries. The trouble with being a mercenary is that no matter how brave or bold they are in front of the enemy, they rarely make history.

They do, however, make a lot of money, and that was especially true in the days of yore, when empires and kingdoms usually conscripted or recruited troops as needed. Very few early kingdoms could afford a professional standing army, so when they needed the very best in a hurry, they called on mercenaries.

There are a few that remain famous (or infamous, depending on your opinion of mercenaries), but are still rarely taught in history classes. Here are a few of those.

Hawkwood went by many names. In Italy they called him Giovanni Acuto, John Sharp and John the Cunning. He was born into the English aristocracy, and served under English King Edward III as a longbowman during the Hundred Years’ War. After his service ended, he decided that war was a pretty good racket and joined the White Company. The White Company was famous in its own right, but Hawkwood’s career would eclipse the company itself.

While still in France, he wreaked havoc on the French countryside to keep it in a state of perpetual chaos so it could never fight England again. Then, he and his band moved into Italy, which was a fragmented collection of states at the time. There were even two competing popes during this period and the constant state of warfare gave Hawkwood plenty of work. Soon, he became the most renowned mercenary captain in the country.

Hawkwood and his band seized towns, put down rebellions, and even teamed up with other mercenary units (and fought against them). He finally died in 1394, with land holdings in England, France, and Italy. His popularity was so great at the time that King Richard II officially requested his body be returned to England.

For 400 years, from 874 until around the 13th Century, the Eastern Roman Empire (later known as the Byzantine Empire) used the Varangian Guard as its frontline shock troops. They were a professional army for hire, a heavy infantry whose peacetime role was guarding the Byzantine Emperor.

The Varangian Guard was heavily recruited from the tribes of Scandinavia, Rus (Russian) and Anglo-Saxon England. They were first accepted as a gift from the Kievian ruler Vladimir I and accepted because they were much more loyal than the Emperor’s original guard – usually due to the tribes’ strict oath of service. In combat, they were often used at critical moments to turn the tide of the battle.

The Athenian historian Xenophon mentions the Ten Thousand in his work “Anabasis” as a mercenary army comprised of hundreds of Greek fighters who took to selling their services as an army. Their most well known client was the Persian King Cyrus the Younger, who hired the band to unseat Artaxerxes II and install him as ruler of the Persian Empire.

Cyrus’ mantra was apparently “if you can’t beat them, hire them.” Because by 401 BC, the Greek mercenary army, who learned their trade fighting Persians, was fighting Artaxerxes II’s army neary what is today Baghdad. They failed, and Cyrus was killed in the fighting, so the Ten Thousand were forced to fight their way home.

Italian states weren’t the only ones hiring mercenaries in the 1300s. In the Middle Ages, demand for good soldiers was through the roof. Italy was, however, an excellent training ground for mercenary soldiers. A group of Spanish-born soldiers who cut their teeth in the Italian Wars would come together as the Catalan Grand Company, led by adventurer Roger de Flor.

The Byzantines needed good men to fill out their armies as they fought the Ottoman Empire by this point and contracted de Flor and the Catalan Grand Company to push the Turks away from Constantinople. They were so good, they would often get carried away and begin looting nearby settlements. In the end, the Byzantine Emperor was forced to hire other mercenaries to kill the Catalans.