Today in military history: Sherman begins infamous march to the sea - We Are The Mighty 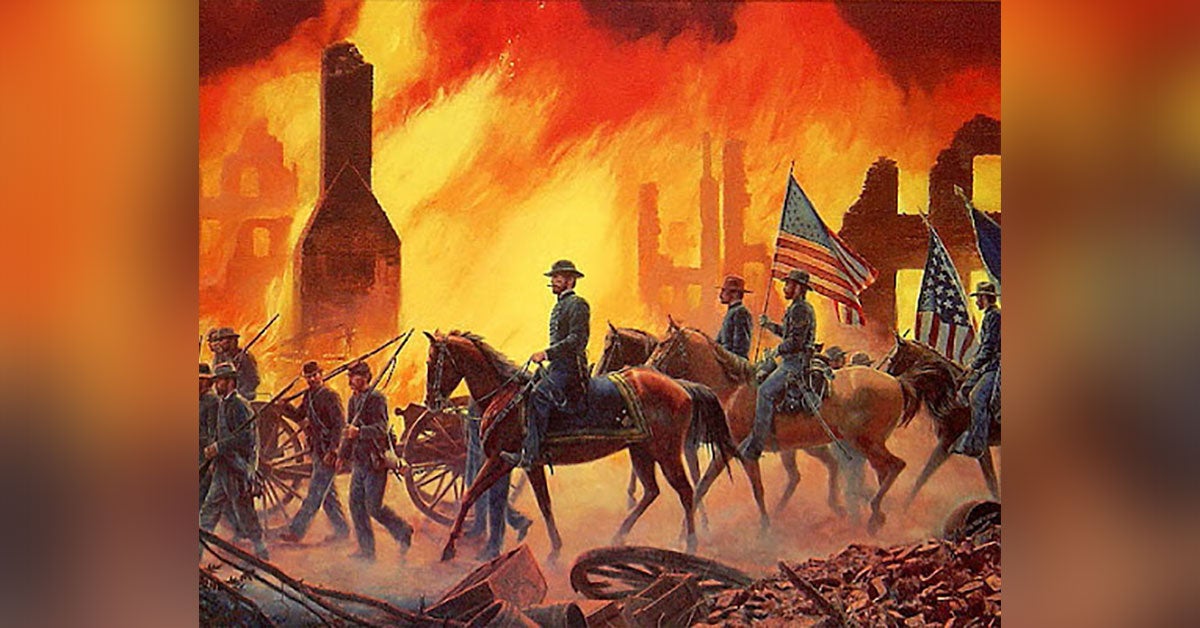 The Civil War was one of the early “Total Wars” in world history, where every industrial, military, diplomatic, and economic asset on both sides of the war was pressed into service, and no holds were barred in combat, at least in the last few years of the fighting. For battlefield leaders like Maj. Gen. William T. Sherman, that meant breaking the South in a way it couldn’t be fixed.

The Civil War had raged for three and a half years when Sherman led a force of 60,000 troops from Atlanta to Savannah. After burning the industrial section of Atlanta, they began their 285-mile trek, stealing food, livestock and supplies and burning down the homes of anyone who resisted.

For six weeks, Sherman’s forces wore down the morale of the Georgian population, making, in his words, “old and young, rich and poor, feel the hard hand of war.”

So, soon after Sherman began his drive toward Atlanta and what would eventually lead to his March to the Sea, he issued a new special order to his army.

Major-General McPherson will move along the railroad toward Decatur and break the telegraph wires and the railroad. In case of the sounds of serious battle he will close in on General Schofield, but otherwise will keep every man of his command at work in destroying the railroad by tearing up track, burning the ties and iron, and twisting the bars when hot. Officers should be instructed that bars simply bent may be used again, but if when red hot they are twisted out of line they cannot be used again. Pile to ties into shape for a bonfire, put the rails across, and when red hot in the middle, let a man at each end twist the bar so that its surface become spiral. General McPherson will dispatch General Garrard’s cavalry eastward along the line of the railroad to continue the destruction as far as deemed prudent.

That excerpt is from Sherman’s Headquarters on July 18, 1864, with orders for the next day. Soon, Sherman’s men were marching across Georgia, twisting rails into a spiral so they could never be properly repaired.

By the time his forces reached Savannah, the Confederates had fled. Four months later, the South would surrender, ending the war.