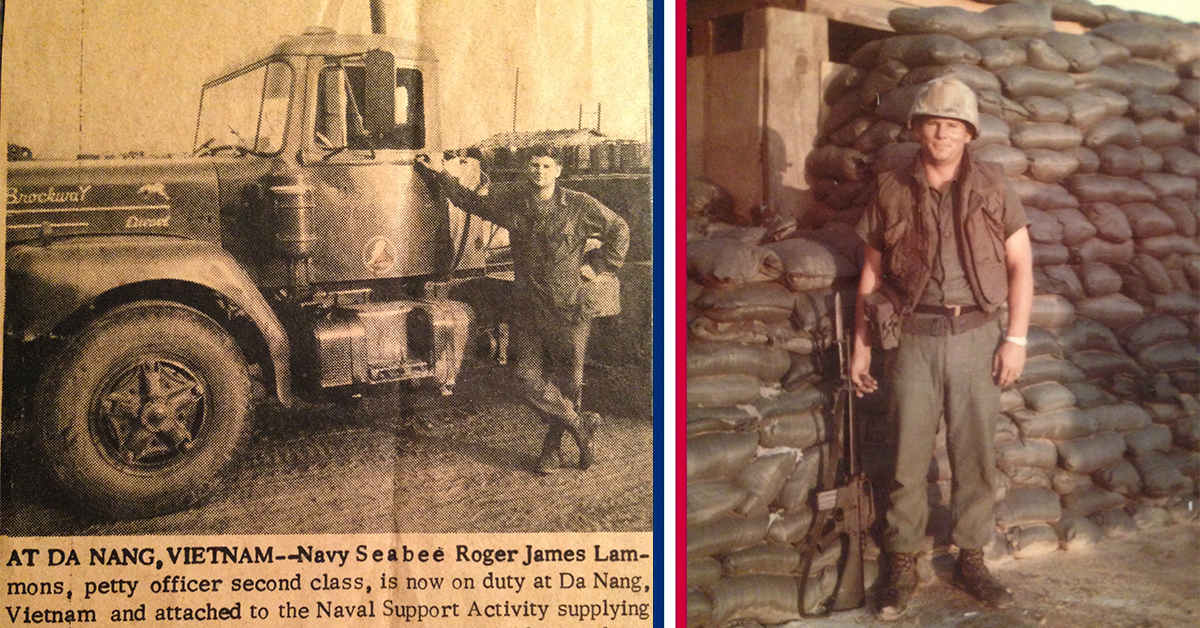 In 1968, Rodger “Jim” Lammons had two choices: he could join the military, or he could wait and be drafted. He chose the former, not knowing the effects Agent Orange would have on his life. In March of that year, the native of Smiths Station, Alabama, signed with the Navy where he served six years as a “SeaBee,” an oronym for C.B., or construction battalion.

After finishing basic and advanced training courses in California, including a four-week stint at Camp Pendleton with Marines, Lammons was dispatched to Vietnam out of Port Hueneme, California.

“That’s where we got on the big bird and flew out,” he said.

For more than a year – 13.5 months – Lammons was stationed in Vietnam. He served as a heavy equipment operator, gunner, and, “whatever it took to get the job done.” Lammons said, at times that even meant driving semis and hauling materials up from deep-water piers, or to Red Beach and dispersing them along Route 1.

“We just did what we needed to do, and that meant the job changed from day-to-day,” he shared.

After Vietnam, Lammons returned to the U.S., before taking another overseas stint in Puerto Rico.

“Then my time was up and I went home,” he said, listing not staying in and retiring with the Navy as one of his biggest regrets.

However, his reception back home was less than welcoming. Along with his fellow veterans, Lammons was egged, spat at. They were cussed at and called names, he said, most notably, “baby killers.”

“None of it was true. We were just there to do what our country asked us to do.”

While he remembers his time in the Navy fondly, Lammon’s stories come in spurts. He gives specific details, then pauses, circling around until the whole of it comes together, often out of order. This, he explained, is due to a rough recovery from surgery – a bad combination of anesthesia and gout. His memory hasn’t been the same since.

His wife, Carol, anticipates each gap, prompting him with questions that cause his eyes to light up with moments from years past.

This is just one of his side effects that can be attributed to Agent Orange.

“They would fly over – helicopters, aircrafts. They would spray different things on the foliage to try and kill it. Well, we were in the foliage and it would just coat us.”

“We didn’t understand the dangers at the time.”

Today, Lammons suffers from gout, diabetes and neuropathy, among other illnesses. He was also diagnosed with prostate cancer.

“There’s a thing, some people, it doesn’t bother them,” he said, referencing his brother who served as a Marine in Vietnam, but has never shown symptoms of Agent Orange, despite direct exposure.

Lammons didn’t know the cause of his illnesses until 2016, when he and Carol relocated to Port St. Joe, Florida. A new town meant a new doctor, and a new facility, and the puzzle pieces of Agent Orange began coming together.

“They saw things that were wrong with me that shouldn’t be wrong.” After seeing various specialists, Lammons was referred to the VA representative in Gulf County, who helped relate his symptoms to Agent Orange exposure.

After his years in the Navy, Lammons worked in Columbus, Georgia as a construction superintendent. Then, at the start of the Global War on Terrorism, he applied to work overseas as a civilian contractor, where he would spend nearly four years.

On why he chose to volunteer, he said it was an easy choice. He told Carol, “There’s got to be something I can do. If they need someone to go, I’ll go.”

Once again, stepping up for his country in a time of war, a time of need.

After all, more than 50 years later, Lammons still cites Vietnam as an unforgettable bonding experience.

“We all became brothers – black, white, it didn’t matter what color – to this day we still are brothers.”

Even now, when seeing someone in a Vietnam hat, he greets them.