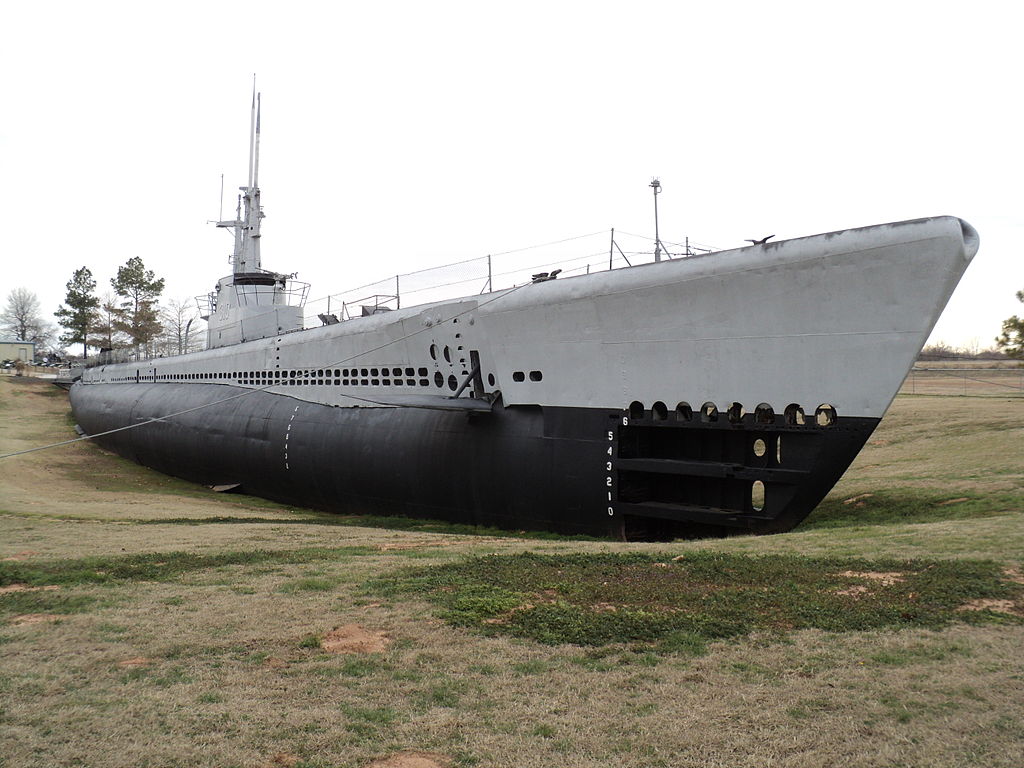 The USS Batfish had a storied World War II history and battle record. Despite being active in the war for less than two years, it has the distinction of being the only submarine to sink three enemy ships in a 76-hour period. It received the Presidential Unit Citation for that action on its sixth combat patrol. Altogether, the Batfish has 14 enemy kills.

After the Japanese surrender, Batfish returned to San Francisco, where it was decommissioned and used as a training vessel. During the Korean War, it was reactivated and deactivated again between 1952 and 1957. In 1969, it was finally struck from the Naval Vessel Registry. It looked like its life was all but over.

So how did the USS Batfish end up just off of exit 33 from Route 165 near Muskogee Oklahoma? The submarine that weighs 1,800 tons and is longer than a football field was moved there in 1973 after a long effort to save the boat from the scrapyard. It was all done by – who else – veterans.

The national organization of U.S. Submarine veterans wanted to establish a submarine memorial in every state, an effort to remember the 52 American submarines and their 3,505 sailors lost in combat.

As early as 1962, Oklahoma’s silent service veterans had been considering which submarine they would choose for their state. The Oklahoma sub veterans were deeply impressed by the USS Drum museum in Mobile, Alabama and wanted a submarine memorial of their own as soon as possible.

There were other possible candidates for the Muskogee memorial. The USS Piranha, also a Balao-class submarine, boasted five battle stars and six combat patrols. Piranha was also a survivor, beating out multiple near-death attacks from the enemy. The USS Sea Dog was the only sub ever named as such and had five patrols. The USS Cavalla was also an option, known for sinking the Japanese aircraft carrier Shokaku, which was involved in the attack on Pearl Harbor.

Piranha and Sea Dog were eventually scrapped. The Cavalla is now a museum ship at Seawolf Park in Galveston, Texas. None of the submarines have any connection to Oklahoma but that didn’t matter to Oklahoma’s submarine veterans. It wasn’t so much about the state itself, it was more for their fallen comrades.

In the end, the Batfish was chosen because it has an incredible combat record and, at the time, was in the best condition of the four possible submarines. Congress approved the transfer of the Batfish from the Navy to Oklahoma in 1971, saving it from a possible fate that included the scrapyard.

Getting the sub to Oklahoma, a state without direct access to the ocean, was another thing altogether. Over the course of seven weeks and 1,350 miles of tugboat duties, the Batish was towed from the port of New Orleans, and through the Arkansas River Navigation System, constructed to give inland states access to the Gulf of Mexico.

It also had to be carried through the relatively shallow water by six barges, and still ran into financial problems. One of the tow barges was sunk along the way and the level of the river had to be lowered to get the boat through Little Rock, Arkansas.

When it finally arrived, it came to a piece of donated land, a onetime soybean field, near the convergence of three rivers, the Arkansas, Verdigris, and Grand Rivers. It took four bulldozers pulling and a tugboat pushing to move the Batfish into place.

On Memorial Day 1973, the submarine veterans’ dream had come true. The park opened up to the public in the city’s eight-acre War Memorial Park. It was fully restored by veterans with gifts from volunteers who reinstalled everything to the last detail, including pin-up girl posters.