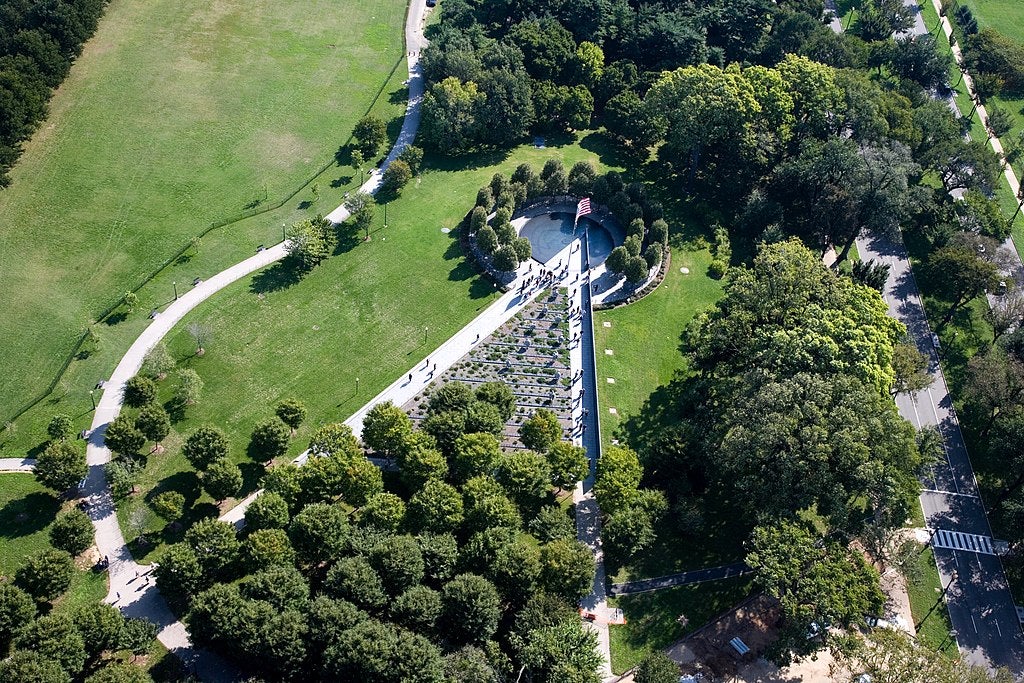 “It’s just a damn mess — full of old bookkeeping errors and typos,” historian Hal Barker told the New York Times. He and his brother Edward maintain the Korean War Project, an information database that keeps the history of the Korean War. They say the newest addition to the Korean War Memorial has thousands of spelling errors, typos and unrelated names.

In 2022, the Korean War Memorial on the National Mall in Washington, D.C. received a new addition: a 380-foot black granite wall that was supposed to hold the names of 36,574 Americans and around 8,000 Korean Augmentation to the United States Army forces (KATUSAs) who were killed during the war.

The $22 million slab is an addition to the original memorial, first dedicated by President Bill Clinton on Korean War Armistice Day, July 27, 1997. Legendary sculptor Frank Gaylord created the centerpiece of the memorial, 19 statues of a Korean War-era unit on patrol called “The Column,” along with a mural wall created by industrial designer Louis Nelson.

The names on the Remembrance Wall were added to the existing memorial over the summer of 2022, but the care taken to etch those names doesn’t match the reverence and care of the original designers. Hal and Edward Barker estimate that the wall includes 1,015 spelling errors and the names of 245 service members whose deaths were unrelated to the war. There are also 500 missing names that should be on the wall.

They are forgotten names of a forgotten war and the Barkers blame various federal agencies, including the Department of Defense, along with the Korean War Veterans Memorial Foundation. In response, the DoD released a statement saying “We encourage all family members or concerned citizens to notify the Department of any names that were omitted, misspelled, or included in error.”

The idea of adding a list of individual names to the National Korean War Veterans Memorial dates back to 2010, when the Korean War Veterans Memorial Foundation began lobbying for such an addition. They turned to Hal and Edward Barker for the complete list of names. The Barkers said they could provide a list, but it would need to be checked and proofread before etching those names.

Since the addition was announced and funded, both brothers have repeatedly voiced their concerns over proofreading and transcribing the names, but those concerns fell on deaf ears, and the result is the thousands of errors that will need to be fixed. Hal and Edward Barker believe the project should be scrapped and started over from the beginning.

The National Park Service, which runs the memorials and maintains them, was opposed to adding a list of names from the start. When the Vietnam Veterans Memorial Wall was first conceived, the debate about whose names qualified to be included on the wall sparked immediate controversy. That controversy persisted long after the Vietnam Veterans Wall was completed, and led to more than 300 names being added in the decades following its dedication.

The National Park Service insisted that the legislation authorizing the Korean War Veterans Wall give sole responsibility for the names and the criteria for including those names to the Secretary of Defense to avoid another controversy. The DoD’s list of names had more inaccuracies than the Barkers’ list and that list is what is engraved on the wall today.