Why the Triangle of Death in Iraq was so infamously dangerous

Why the Triangle of Death in Iraq was so infamously dangerous 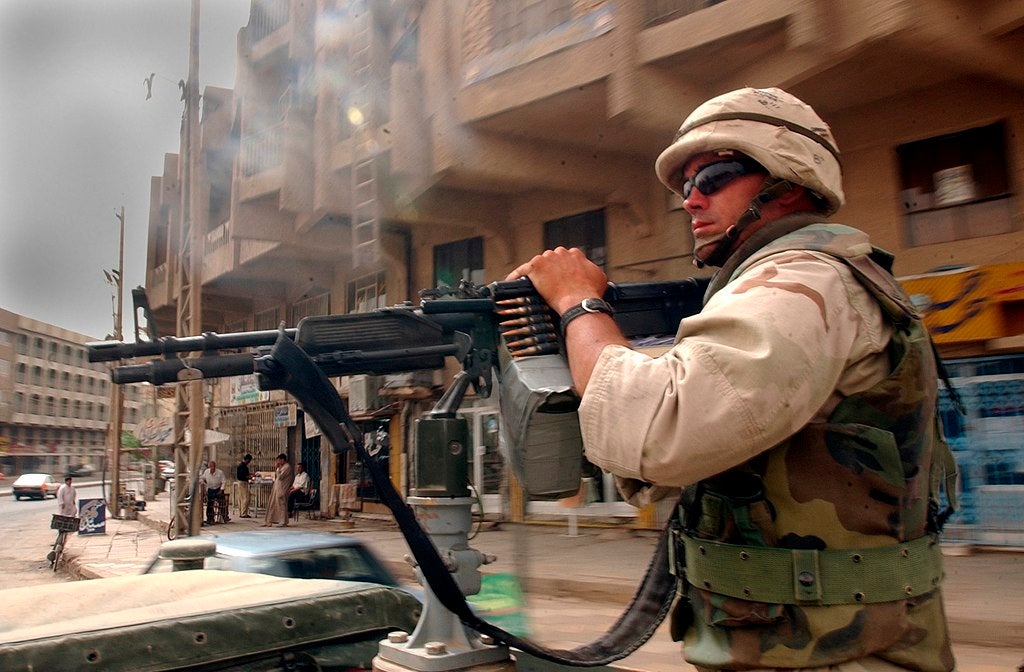 A U.S. Navy Seabee mans a vehicle-mounted machine gun while travelling through Al Hillah, Iraq in May 2003.

The “Triangle of Death” in Iraq was an extremely dangerous area during the US-Iraq war. When U.S. and Coalition forces liberated Iraq between 2003 to 2011, the patch of territory just south of Baghdad developed the menacing nickname. The region saw intense warfare and sectarian violence from early 2003 to the autumn of 2007. As in Mahmudiya Region, the “Triangle of Death” includes Yusufiyah, Mahmoudiyah, Iskandariyah, Latifiyah and Jurf Al Sakhar, as well as hundreds of remote towns. Filled to the brim with improvised explosive devices, marauding insurgents and coalition troops met at the Triangle of Death.

The Triangle is home to over one million predominantly Sunni inhabitants (the ethnic majority in Iraq). The Euphrates River, which surrounds the Triangle to the southwest, is its most prominent geological formation. Numerous agricultural channels cut through the landscape.Many of these estates are tiny and the landowners’ families manage them—the proximity to the Euphrates River and water sources for agriculture results in high moisture content.

Because of a prominent power plant there, insurgents constantly threatened Musayyib. Approximately 33% of its highest-level production was being produced in October 2006. U.S. forces operated Patrol Base Dragon (formerly known as FOB Chosin) on premises of the nuclear reactor. Due to fire support assaults on the infrastructure and the abduction of American troops within the region. During 2007, assaults decreased as a result of enhanced measures. Then in 2008, the site was decommissioned as a U.S. base owing to an overarching rise in surveillance in the Babil Governorate.

According to experts, warfare in this territory results from several factors, including the Sunni predominance, Saddam Hussein-era arms industry system, deprivation prospects to supporting the insurgents, and a proximity flow of money and weapons.

However, amid increasing fatalities at first, 2007 was the bloodiest year for U.S. soldiers; the decline in bloodshed as each year progressed proved encouraging. Some of the military units were removed. As a result, the surge’s final success is still being debated. The decline in killings in 2007 was due to more than just the surge. As part of this, the U.S. ground troops adopted an insurgency approach that was much more traditional. Al-Qaeda-affiliated militants were driven out of Iraq by the Sunni Awakening, which began in August of the same year, followed by the unilateral ceasefire maintained by Saddam and his soldiers commencing in August the same year.

U.S.-Iraqi settlement passed by the Iraqi government in November 2008 established a legislative structure for U.S. troop operations in Iraq. It provides the framework for the ultimate departure of U.S. soldiers in the country. It was agreed that U.S. soldiers would depart the regions by mid-2009 and that their evacuation from the territory would be accomplished by December 31, 2011. According to Barack Obama, combat operations from the United States would leave Iraq by August 31, 2010. The remaining soldiers departing by the final hour of 2011.

Over 50,000 American troops remained in Iraq to operate as a transitional force after the final fighting unit departed from Iraq two weeks earlier than scheduled on August 18, 2010.

In contradiction to the U.S. military, the Iraqi military has not released detailed statistics on Iraqi fatalities for several decades. Iraq’s officials promised their assessment of terrorist fatalities from 2004 to 2008 in October 2009. The administration estimates that approximately 85,000 Iraqis—both citizens and soldiers died during the four-year conflict.

Information publishing was denounced by both U.S. and Iraqi authorities as hampering security operations and endangering military troops and Iraqis who work with the United States. They alleged that the U.S. military managed to keep more accurate records of Iraqi deaths than initially confirmed. Additionally, Iran issued obvious military support to Shi’i militia groups wanting to participate in Iraq’s civil war. All these factors made the Triangle of Death one big sh*t show.

After a series of discussions in 2008, American military authorities revealed in July 2011 that the United States and Iraq had begun negotiating to maintain possibly a thousand troops in Iraq through December 31, 2011. The Iraqi population was opposed to the idea of a potential change if the U.S. stayed in Iraq. Talks broke down because the opposing sides couldn’t settle on whether or not U.S. forces could continue to enjoy diplomatic cover from Iraqi legislation. At just the conclusion of 2011, President Obama declared that the state’s leftover 39,000 troops would be sent home. During a keynote speech in Baghdad on December 15, the American military officially ended its operations in Iraq. Thus closing the chapter on one of the most violent regions in modern history.