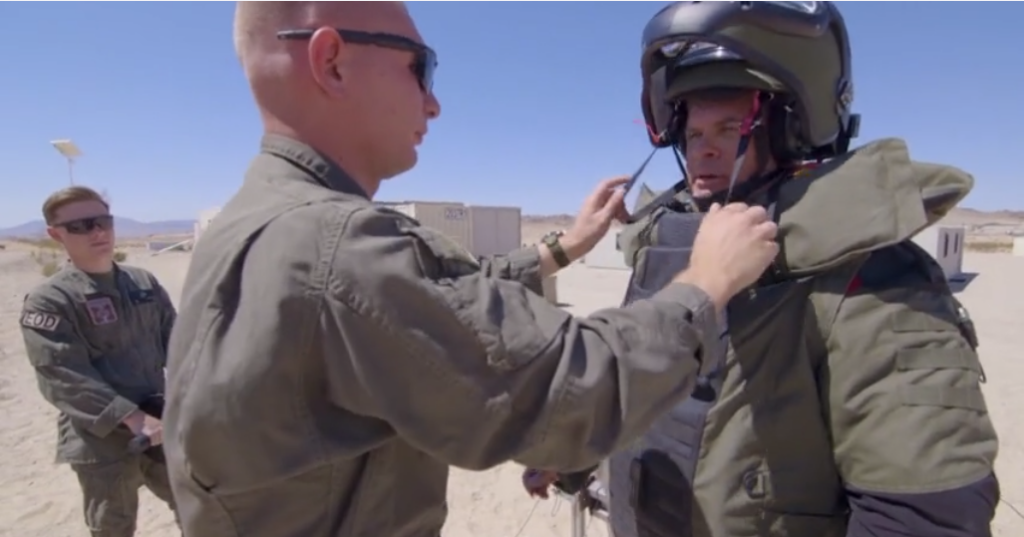 Dan Ball, host of Hungry Heroes and Air Force veteran, visits with the Marines of the Explosive Ordnance Disposal (EOD) Unit to find out what a day in life is like for these professionals. Ball hails from Ohio and began his career in Public Affairs in the Air Force. He attended Defense Information School at Fort Meade, MD and served in the Air Force in the 1990s. He broke into being a reporter and eventual anchor in the early 2000s. He served in many different capacities at different news outlets until he finally landed at One America News Network. Ball is now the host of Real America.

His focus for Hungry Heroes is on what keeps the fires burning in our heroes’ bodies, minds and souls. Ball highlights the hard work of military members and their life dedicated to their service to our nation. EOD isn’t your normal desk job, so be prepared for an engaging and impactful feature done by Ball. We even get to see a bit of the town of 29 Palms and the local culture off base. The base and town are in the middle of nowhere, which much to the chagrin of many Marines, does have its merits. Marines and sailors usually spend the weekends away in Las Vegas, Palm Springs, Los Angeles or almost any town that is not the “stumps”.

The installation at 29 Palms is the site of many intense training exercises for Marines across the Corps and it is the final stop for many units for training before they deploy. One of the exercises was known as the Combined Arms Exercise or CAX, which is a giant wargame in the desert with the ground and air sides of the Marine Corps working against an enemy force. It is a long exercise that is taxing and insightful on many levels.

After his challenging day with the EOD Marines, Ball gets the full effect of the experience by wearing a bomb suit, getting to blow up a simulated piece of ordnance that needs to be disposed and the opportunity to try some Meals Ready to Eat (MREs). Mmmmm Mmmmm, make sure you put some Tabasco or jalapeno cheese sauce on those MREs which helps to make them more palatable and allows for them to go down as one full swallow so you don’t have to chew and taste those “lovely” preservatives. Be careful of the milkshakes, they might have some real milk power in them if really want to drink a “rehydrated” milk solution with water. Actually they are pretty good, haha. Remember 10-year shelf life folks! We get to see the vast base as well to include its many pieces of surplus military equipment to be used as targets. Ball ends the segment by speaking with the EOD Marines to get a further understanding of why they do what they do. Check out the segment and get an in-depth look at EOD and the Marines that serve in the specialty.