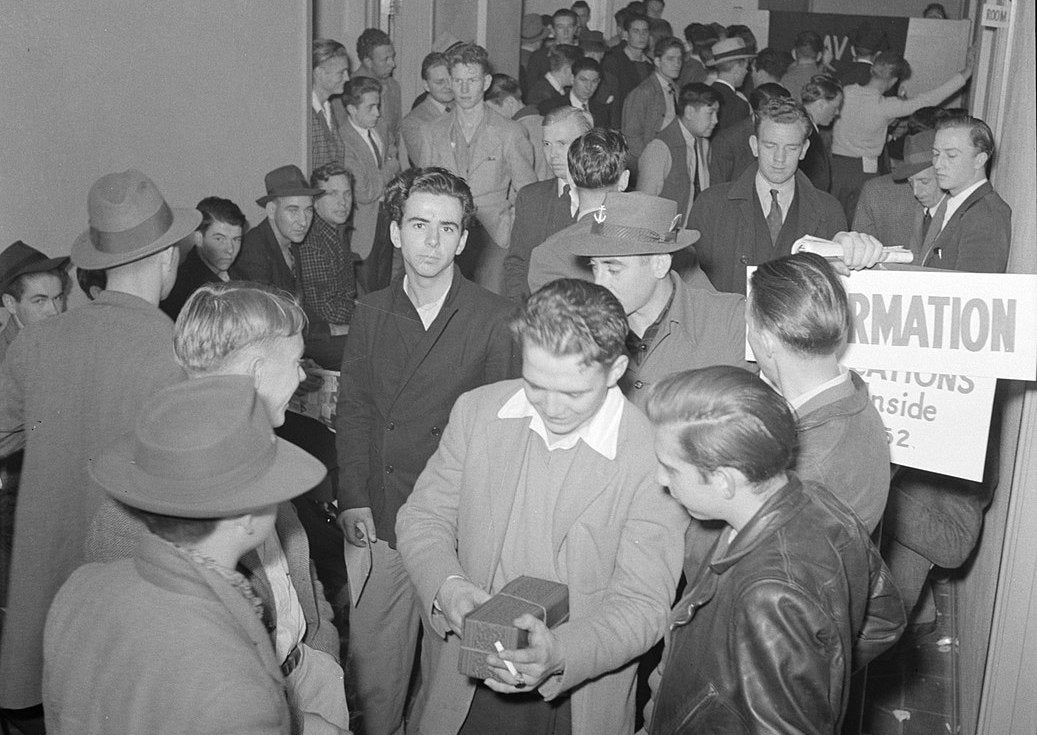 During the second World War, the U.S. economy entered a golden age. The last chapter of the Great Depression ended when America united against a common enemy. The Office of Price Administration, by order of President Roosevelt, selected items in the economy that had to be rationed to ensure victory overseas. After the war, WWII era service members could once again purchase these nine items again. WATM looks at an E-5’s pay rate who hypothetically served four years of service. From 1942 to 1946, a sergeant with over three years of service rated a paycheck of $81.90.

On September 12, 1941 Ford introduced their new Ford Super Deluxe two-door sedan. A peace time troops would be able to purchase a new one for $920 right off the lot with their paycheck. It would be the last model the public would be able to buy until the end of the war. The attack on Pearl Harbor forced America to shift gears from leisure to lethal.

This shiny new toy had terrible timing because on January 1, 1942, the government factories across the U.S. transformed their production lines to assist Uncle Sam in the war effort. First responders, farmers, medical and essential workers were the only ones allowed to purchase vehicles once the bombs fell. Even then, one had to prove that they have driven over 40,000 miles on a much older model due to rationing.

WWII saw an explosion of technology. Unfortunately, the production of synthetic rubber had not caught up to natural sources from the Pacific. When the Imperial Japanese seized the territories of Malaya and the Dutch East Indies, they cut America’s rubber supply by 91%.

The construction of a military airplane used one-half ton of rubber; a tank needed about one ton and a battleship, 75 tons. Each person in the military required 32 pounds of rubber for footwear, clothing, and equipment. Tires were needed for all kinds of vehicles and aircraft. (American Chemical Society National Historic Chemical Landmarks. U.S. Synthetic Rubber)

The enormous demand of rubber for the war meant civilians had to do more with less. A G.I. returning home to a grateful nation would now be able to purchase tires with their paycheck free of rationing. Civilians at the time were restricted to only 5 tires per automobile so they had to make it count.

The average history buff knows that gas and fuel was rationed during WWII. However, because of the rationing gas prices were able to stay consistent between 19 cents and 21 cents from 1941 to 1945. Civilians were not the only ones restricted to ration stamps. Active duty troops on leave also had to wait in line for their fair share. A gallon of gas in LA floats around $5 a gallon. Comparatively to the prices in 1945, that same 19 cent gallon of gas with a ration coupon would cost us the equivalent of $3.13 today when factored for inflation. We’re paying more for fuel now than our great-grandfathers did during the most brutal war in history. Thanks a lot Putin.

Nylon stockings hit the shelves after premiering at the 1939 New York World’s Fair on April 30, 1939. They sold for $1.25 a pair and were immensely popular. They were so popular that by that same time the following year over three quarter million pairs had been sold on the first day.

Sugar was heavily rationed during the war but one of the major advantages a troop had with their enlisted pay was a bottle of coke. The government contracts The Coca-Cola company secured during the war made them exempt from the rations and they could provide troops with the much needed morale boost at just 5 cents a bottle out of their paycheck. While the company operated at a loss it was able to make its profits after the war with its massive distribution and manufacturing. The war made Coca-Cola a titan of industry and a household name in virtually every country on the planet.