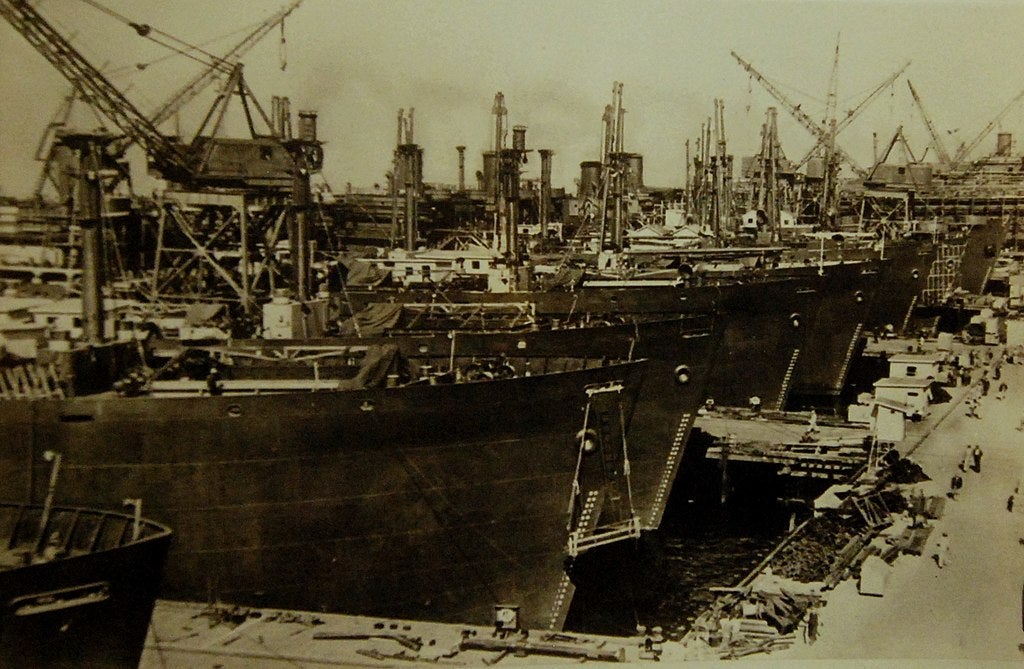 Henry J. Kaiser figured out how to refoot an economy focused on razor blades and soda bottles into a Liberty-ship machine. He built 1/3 of all Navy Liberty ships of the war and earned himself the nickname “Sir Launch-A-Lot.” Which was odd since those ships spelled doom for Germany and he was the child of two German immigrants.

Seriously, y’all, getting the best immigrants from around the world and their descendants is basically a national cheat code.

Kaiser before the war

If you’re picturing a young whippersnapper who heard about Pearl Harbor and jumped in with a whole lot of gumption and fresh ideas, well, so was I, and we were both wrong. Kaiser was born in New York in 1882 and was almost 60 when Japan dragged America into the war.

Kaiser grew up humble in New York. So humble that, when he met and fell in love with Bess Fosburgh, her dad made him prove that he could support her. Kaiser moved to Washington State, became a top salesman and came back for his bride. Then he started launching companies that would make him rich and famous.

The dude was seriously a pre-WWI Barney Stinson.

The first of his major companies was Henry J. Kaiser, Co., a heavy construction company that built roads and dams, including the Hoover Dam, in the U.S. and nearby countries. So he had quite the reputation, plenty of connections, and deep pockets by the 1930s.

By the way, you gotta respect someone who kept the name “Kaiser” while doing business with the government during and after World War I.

The Kaisers go to war against Germany

America’s entrance to World War II was slower than a sloth making its way into a cold pool. It knew that war was likely in 1938, was growing in 1939, and would drag it in by 1940, but wouldn’t actually join the war until the end of 1941.

Kaiser joined the effort to support refugees in 1940, though, and mobilized his considerable resources and industrial knowledge into Allied shipbuilding in 1940, as well. Basically, Churchill lit the beacon and Kaiser answered.

This might have been a surprise to all the American shipbuilders since Kaiser had no experience building ships. He had built a few racing boats as an expensive hobby, though. So, you know, same-same.

When Kaiser signed his first contract with Britain for 31 cargo ships, he didn’t even have a shipyard. In May 1941, he got one up and running in Oregon and soon created one the first Liberty ships, The Star of Oregon. So, when America entered the war that December, Kaiser and his crews already had more than six months of experience! True veterans.

But this article isn’t titled “The cocky industrialist who failed to build a fleet,” so you can probably guess what happened next. The Oregon Shipbuilding Company, as it was named, quickly became one of the fastest shipbuilders of the war. It boasted building 1/3 of the Liberty fleet and the record for fastest single Liberty ship, less than 5 days from laying the keel to launching the ship.

It also built a new shipyard in Vancouver, Canada, for the construction of escort carrier, the smaller aircraft carriers that supported their larger cousins. Another shipyard built T2 tankers. Kaiser‘s ability to martial men and materiel while staying ahead of schedule and under budget made him a legend.

Not bad for a son of immigrants who was unafraid to step in, constantly organizing and marshalling the American workman. Everyone give it up for America’s favorite shipbuilding German!