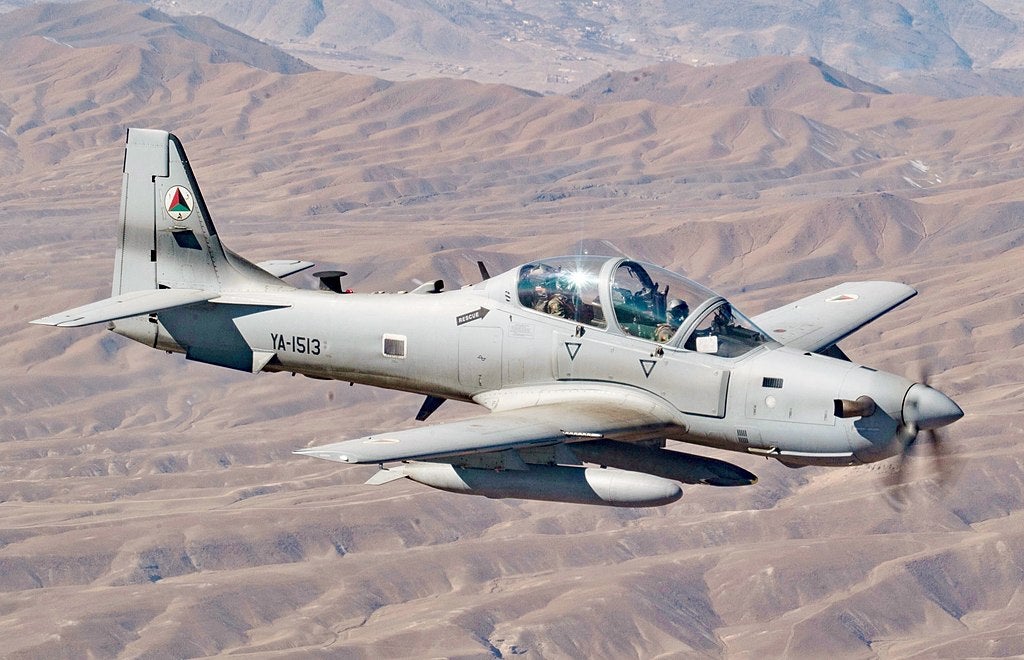 After the fall of Kabul to the Taliban in 2021, the United States left around $7 billion worth of military equipment behind. This includes the mixture of light attack planes and helicopters donated to the Afghan Air Force when the U.S. thought the government of President Ashraf Ghani could hold its own.

The Ghani-led government fled the country, with the president himself announcing he was gone by 11 p.m. on August 15. Members of his government weren’t the only ones who left the country. A number of loyalist aircraft landed in neighboring Tajikistan and Uzbekistan over the following months. Now, both the U.S. and the Taliban are claiming them

On the same day the Taliban advance stopped at Kabul, 22 Afghan Air Force planes and 24 helicopters carrying 585 Afghan military personnel fled to Uzbekistan. Two more Afghan planes carrying hundreds of troops landed in the Tajik city of Bokhtar as well. Since then, a total of almost 50 aircraft have arrived in the neighboring countries.

Talks between Tajikistan, Uzbekistan and the U.S. about returning the planes to the United States are ongoing, according to reports. Their place in the world has been in limbo for the past year, as the Taliban claim the planes belong to them and are demanding them back. Uzbekistan is siding with Washington’s claim, as the U.S. may be exerting influence behind the scenes.

While both former Soviet Republics are traditionally within the sphere of influence of Russia and its president, Vladimir Putin, Russia has yet to weigh in or exert its own influence on the situation. Meanwhile, Tajikistan is currently embroiled in a border clash with its neighbor, Kyrgyzstan.

Kyrgyzstan is the former home of Manas Transit Center, an American airbase near its capital of Bishkek. More than 100 people have died in the fighting between the two Central Asian republics, making the possibility of American-made light attack aircraft, American intelligence or American troops an even more interesting prospect for Tajikistan.

American officials may also be assessing the aircraft to determine whether or not they’re still operational and might use them as leverage to gain a foothold in the region. If a deal can be made, the aircraft could be given to the two countries in exchange for security partnerships, intelligence sharing or even a deal that would base American aircraft or troops in the countries.

Secretary of State Antony Blinken met with leaders from both Uzbekistan and Tajikistan as the U.S. prepared to withdraw from Afghanistan, but nothing came from the visits. Some speculate Moscow used its influence in the region to prevent a continued American presence. It was interference from Putin’s Kremlin that led to the withdrawal of U.S. bases in both Kyrgyzstan and Uzbekistan during the Afghan War.

Since its withdrawal, the U.S. has conducted only one drone strike against a terrorist target inside Afghanistan, the mission that killed al-Qaeda leader Ayman al-Zawahiri in July 2022.