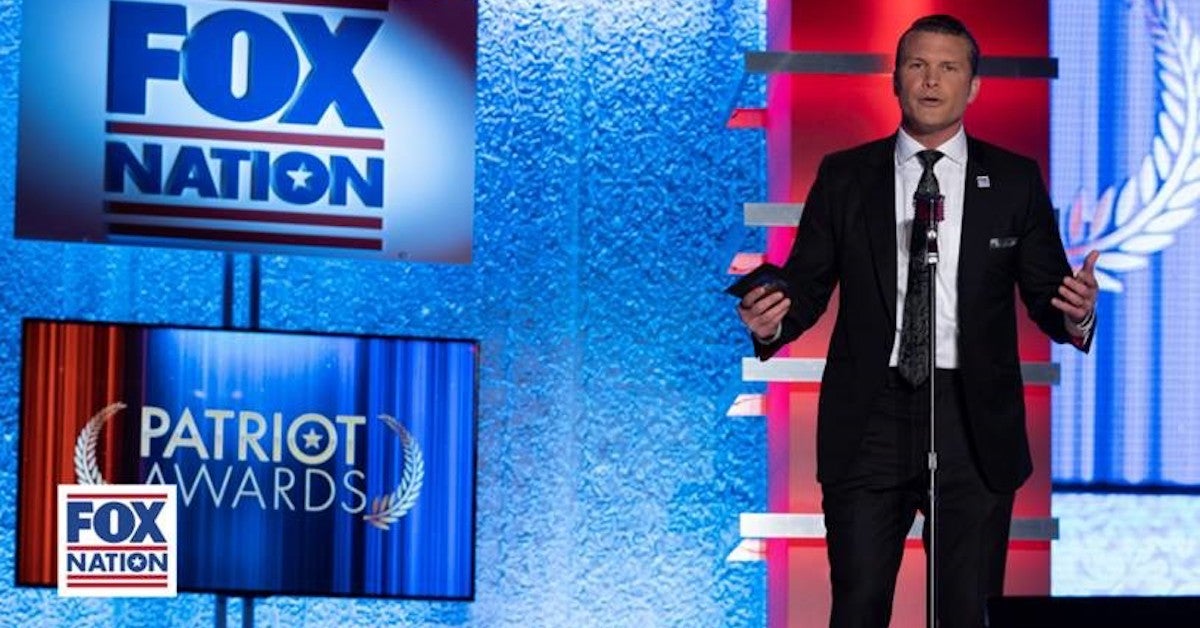 Pete Hegseth is set to host Fox Nation’s 2nd annual Patriot Awards on Friday, celebrated virtually this year due to the COVID-19 pandemic. But that’s not all he does.

Although well known as the co-host of Fox & Friends Weekend, he is also a proud Army National Guard combat veteran with a passion for service and holds a deep love for his country. “I love the Patriot Awards because it’s the one award show in America that celebrates what we should be celebrating,” he explained. Hegseth shared that the show honors people like service members and law enforcement but also unsung heroes — ordinary people doing extraordinary things.

One thing that Hegseth feels really sets this award apart from others is the highlighting of values and honoring of everyday Americans serving their communities. “These people didn’t do these things because they thought they would get an award or because they thought they would get recognition which I think makes it all the more special,” he said. “We think it’s exactly the kind of thing that people want to be hearing right now.” Not only does the Patriot Awards want to showcase these stories but they hope to inspire viewers to recognize that they too can make a difference.

Hegseth appears to be a complete natural in front of a camera but his path to becoming one of the most recognizable faces on television started with wanting to serve his country. The seed was planted within him as a young boy watching small town parades showcasing veterans but it kept growing as he got older. After graduating from Princeton in 2003, he was commissioned into the Army National Guard as an infantry officer. A year later, he was called to active duty and deployed to Guantanamo Bay where he was an infantry platoon leader. Despite finishing his deployment and being able to return home to the states, he volunteered to deploy to Iraq.

When Hegseth returned from that deployment in 2007, he spent a lot of his time as an advocate on veterans issues. He was a frequent commentator on national talk shows and even testified before Congress. Hegseth was one semester away from completing his master’s degree in 2011 when he deployed to Afghanistan.

During his time in service, Hegseth was awarded the Bronze Star twice. After 12 years, he left the Army National Guard as a major, although he still remains part of the Individual Ready Reserve. “What motivates me is love of country and wanting to fight for it. It’s why I signed up to join the military in the first place… when I got out, like a lot of vets, I was like, what do I do now?” Hegseth said. Looking for purpose, he spent some time running advocacy groups and continued to speak on veterans issues.

Slowly, Hegseth began gaining traction and recognition for segments he was involved in on television. “Eventually some producers at Fox & Friends said, ‘Hey, have you ever thought about asking questions instead of answering them?” Hegseth said with a smile. Although not sure how it would pan out, he gave it a shot. “It’s not the same but once you’ve been shot at or been there on missions, you can handle a couple of tough questions on live television.” The rest is history.

Being a combat veteran in television is a rarity, but something that Hegseth takes pride in. “I never wanted to be on TV; that was never my goal. But here I am and I want to use it to serve the country that I love so much,” he explained. He does this through his continued advocacy and co-hosting the Fox & Friends Weekend show, but even more so on the streamed special series Modern Warriors, airing on Fox Nation. Modern Warriors highlights the experiences and lives of post 9/11 veterans, giving them the opportunity to truly share their truth. Although it really allowed him to dig deep into their stories, Hegseth wanted to do more. So, he wrote a book.

Modern Warriors will be out on shelves on November 24, 2020 and it’s a body of work that Hegseth is excited to get out into the world. “The book is really a series of interviews. It’s 15 chapters, 15 modern warriors. It’s mostly in their own words,” he explained. “You meet the human side of these guys…They were really honest in the challenges they’ve seen and how our country takes regular dudes from regular places and gives them extraordinary training. Then they send them off to the most dangerous places in the world and bring them home and effectively say ‘good luck’…you know you are signing up for that, but it doesn’t make it any easier.”

Hegseth was very vocal about recognizing the impact that being a soldier had on his life. It’s his hope that his story will inspire others to step forward and use their voice, even when it’s uncomfortable. Hegseth’s words of advice are simple — in those moments of overcoming adversity and stepping out in courage, other patriots are just waiting to support you.

To watch the Patriot Awards live on Friday, November 20 at 8pm Eastern, subscribe to Fox Nation. You can also catch the encore presentation on Fox News Sunday, November 22.