New movie 'The Greatest Beer Run Ever' features the best true story, ever - We Are The Mighty

New movie ‘The Greatest Beer Run Ever’ features the best true story, ever 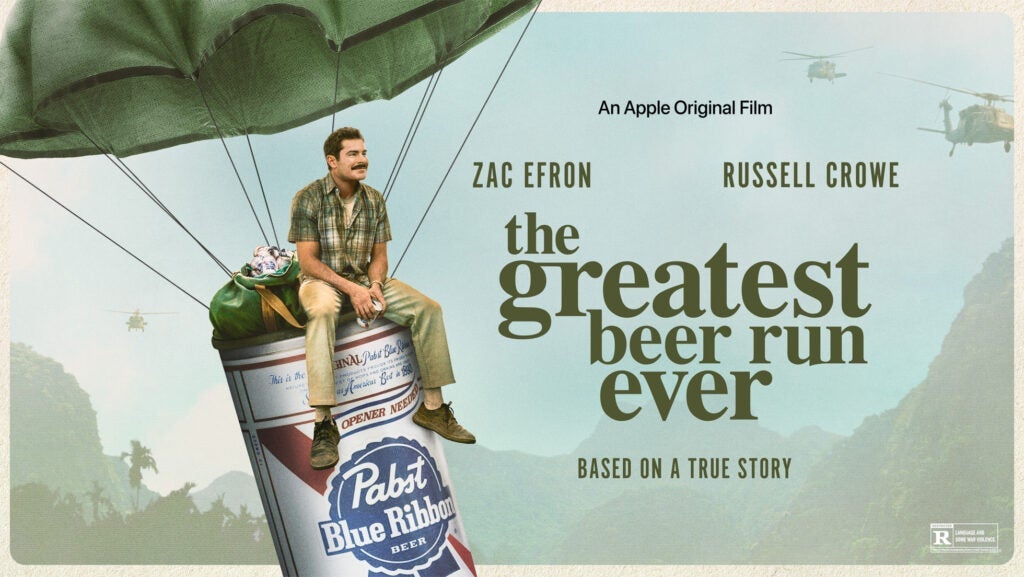 The opportunity for an early screening of The Greatest Beer Run Ever with Zac Efron, Russell Crowe and Bill Murray is one that WATM jumped at immediately. The movie was shown in the wonderfully Golden Era Hollywood fantastic Fox Theater in Westwood. Many great premieres have taken place at the theater, which gives it an extra special charm. The film is helmed by the master craftsman of comedy with elements of drama sprinkled throughout his films, Peter Farrelly. It is based on the book of the same name by John “Chickie” Donahue and Joanna Malloy. It made my Friday night and will make yours (any night really), too, if you give it a chance.

The story of The Greatest Beer Run Ever takes us to 1967 New York City, pre-World Trade Centers, and so much less technology. We even get a taste of NYC history with the clothes, music and cars, especially the Checkers Cabs. It was a simpler time of close-knit communities, three TV stations to choose from, Walter Cronkite giving us the news, ritualistic family dinners and Sunday church. At the same time, people were experiencing the horrors of the Vietnam War in their local neighborhoods. Young men were being killed in a faraway land in a conflict that did not always make sense. It was a time of the loss of innocence and the beginning of distrust toward our government. Many changes came during the 60s which remain in our culture today.

Zac Efron stars as John “Chickie” Donahue, a United States Marine from 1958 to 1964 who served in the Philippines and Okinawa and has become a Merchant Marine based in NYC by the mid-1960s. He lives at home with his parents at the ripe old age of 27 and is criticized by his father for not being a man with more responsibility and a family. Chickie takes up a bet to deliver beer to his friends and neighbors currently doing their tour in Vietnam. Bill Murray as “The Colonel” provides the voice of reason and says what the audience, especially if they are from the era, is thinking. The Colonel is a World War II veteran and member of the Greatest Generation. Murray seems to be a composite of many different voices and people of the times. He’s the favorite, lovable and crusty uncle who tells you the way it is, like your Uncle Gene who worked at a local glass factory and was in the union! By crappy! In a way, the Colonel is reminiscent of Archie Bunker, except less crass. He should have called Chickie a “meat head.” Chickie hitches a ride as an oiler on the Merchant Marine ship headed to Nam and carries with him a lot of Pabst Blue Ribbon….a lot.

He makes it to Vietnam and locates one of his friends almost immediately. From there we take further flight in the adventure as Chickie makes his way across Vietnam. He even crosses paths with the real CIA, as he is mistaken for the CIA throughout the story, but gets a serious dose of reality when he meets a spook in the flesh. The filmmakers nail the feeling and vibe of Vietnam, although my age precludes me from having seen 1960s Vietnam in person. Having visited it in real life, the culture seems to transverse the screen, especially with the traffic and pedestrians. A few interesting points are the Caravelle Hotel, which was a home for journalists, CIA, military and important people in Saigon.

Having been to the Caravelle Hotel, they absolutely replicated the look, vibe and ambiance of the bar. Chickie meets Arthur Coates, a journalist, portrayed by Russell Crowe. It resonates on many levels that the appropriate research was done and then some on how to make the film feel authentic. My visit to the hotel was decades after the war, however having had a drink there with new friends from Australia at the time, did connect me even further to the film. Another couple of interesting points are how Chickie is involved in the Battle for Khe Sahn and then returns to Saigon just in time for the Tet New Year…which is in 1968. He is in Saigon for the Tet Offensive and we get to see urban warfare, the U.S. Embassy under attack and Chickie having near misses every second. Russell Crowe guides and accompanies Chickie and does his best to keep him alive.

Efron performs effortlessly in the role of Chickie and is engaging to watch. He makes every scene his own and brings Chickie to life on the big screen. Many times I forgot it was Efron and really thought it was Chickie with a documentary film crew following him. There are light moments and dark moments evenly balanced with a deep sense of Efron’s Chickie getting a wake-up call while “in country.” The American culture is viewed through Efron. In the same way the U.S. changed in the 60s and lost its innocence, so too happens to Chickie. It is well crafted and portrayed on screen and in such a way that has not been done before in a Vietnam film, with a subtle sense of Good Morning, Vietnam somewhere beneath the surface. Efron’s interaction with his fellow actors resonates with a sense of camaraderie from one service member to another, even though Chickie is no longer active in the setting of the story. Russell Crowe’s gritty and acerbic journalist is lovable and crusty at the same time, similar to another character in the film. Coates’s character wants to do well but is traumatized by the war and death that he has seen so much.

The Greatest Beer Run Ever‘s direction is superb, its writing humorously engaging and its cinematography second to none. Farrelly does well with the blending of humor, tragedy and war that makes the film consistently distinctly different. The writing draws on the rich characters of the book to make the film fully fleshed out. The screenplay keeps your eyes on the screen and your heart with Chickie as the heat turns up. The photography is breathtaking and captures much of what one of my beloved uncles and Vietnam veteran of the 1st Air Calvary Gail Coakley told me about the war, “it was so beautiful riding in the helicopter through the clouds.

You would come out of the cloud cover and see beautiful greenery, mountains and waterfalls. Then within five minutes, you were on the ground and under intense fire in totally another world. It just didn’t make sense sometimes how such a place so beautiful could be so deadly and hostile.” These thoughts are captured in the film many times and in multiple settings. If anything the cinematography will keep your eyes watching what is going to happen next, but there is much more to the story so it is icing on the cake for me. The sounds of the hueys, aircraft and weaponry are spot on as well, which should lead to an Oscar nomination in Cinematography and Sound. It is an immersive experience in the theater.

Overall, The Greatest Beer Run Ever is an insightful, watchable and engaging adventure filmed laced with appropriate and fitting comedy and drama to make it memorable. It is best on the big silver screen, so make it to a theater near you if you can.