MVP is Nate Boyer's new, must-see film - We Are The Mighty 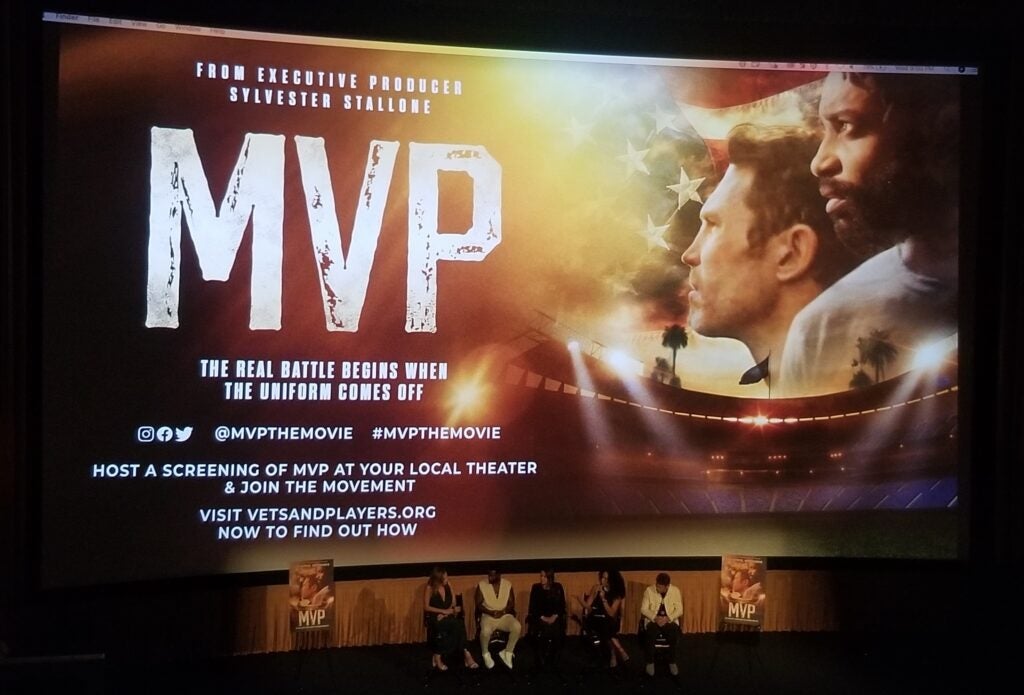 Last week, WATM had the incredible opportunity to screen MVP at The Grove. The film has so much heart, meaning and care put into it by the creators and collaborators on the project. The evening opened with a heartwarming introduction by Nate Boyer. You could feel the honesty and directness of the film’s subject matter radiate from him. Nate not only acted in the film but also hand a hand in directing, producing and writing the script. It is apparent why Sly Stallone served as an executive producer on the project as you will get healthy and positive doses of Rocky the underdog overcoming the odds throughout the course of the feature.

We are introduced to recently retired NFL player Will Phillips, played by the wonderful and talented Mo McRae, who already misses his days on the field and in the locker room and to Zephyr, portrayed by Nate Boyer, who is a Marine Corps veteran living in a veteran shelter in Los Angeles. The unlikely two cross paths after Phillips returns home after a hard day’s drinking and Zephyr, Phillip’s gated compound’s security guard, comes to his aid. From there, we’re off to an interesting and engaging start with the two developing a special bond with one as a professional athlete and the other as a veteran service member. We are introduced to a host of interesting veteran characters at the homeless shelter with a notable appearance by Vietnam Veteran Marine turned actor Dan Lauria, aka the dad from The Wonder Years.

We see the camaraderie build as Phillips becomes more engaged with Zephyr and his fellow veterans, while Phillips himself comes to terms with his own life purpose after a career on the gridiron. Throughout the film, we get to witness Phillips and Zephyr bond during physical training at the gym, horseback riding and casual conversation with the appropriate ribbing at times between the guys. Phillips and Zephyr both have a love interest in the film, so we get a good dose of romance as well. Phillips’s wife is played by Christina Ochoa and Zephyr’s girlfriend Emmy is portrayed Dina Shihabi. The women play a key role in the story and offer a character for women audience members to identify with, especially the spouse or significant other of a veteran or former professional athlete.

We get some comedic relief from Tom Arnold, who is fitting as a Fantasy Football analyst for the NFL Network and Jay Glazer, who does a fantastic job of playing his humorous self. We also get a further who’s who of NFL greats with cameos by Michael Strahan, Tony Gonzalez and Howie Long. All are in the NFL Hall of Fame and all do good work on screen that is likable and memorable. The story builds to a strong climax and a decent denouement that will have you leave the theaters with a positive attitude. The film is on our must-see list for the fall of 2022!

Some key notes for the production are the number of veterans that worked on the film. Veterans ran every department on the project except for cinematography per Boyer’s discussion points both before and after the show. In the post-screening discussion session, comments were made by the cast about how collaborative and positive it was to work on a set with so many veterans that were team-focused and were a part of something bigger than themselves. Boyer made a point at the Q&A session after the screening to share how proud he was that so many former service members contributed to the project and how well it has turned out because of their contributions.

From their site, “MVP empowers combat veterans and former professional athletes by connecting them after the uniform comes off; providing them with a new team to assist with transition, promote personal development, and show them they are never alone.” The movie sends a strong message of hope, even in our darkest moments, and confronts many of the negative veteran stereotypes we see across our culture. MVP is a film worth seeing and a cause worth contributing to in any manner you choose.

The trailer for MVP is courtesy of our friends at Youtube.com.