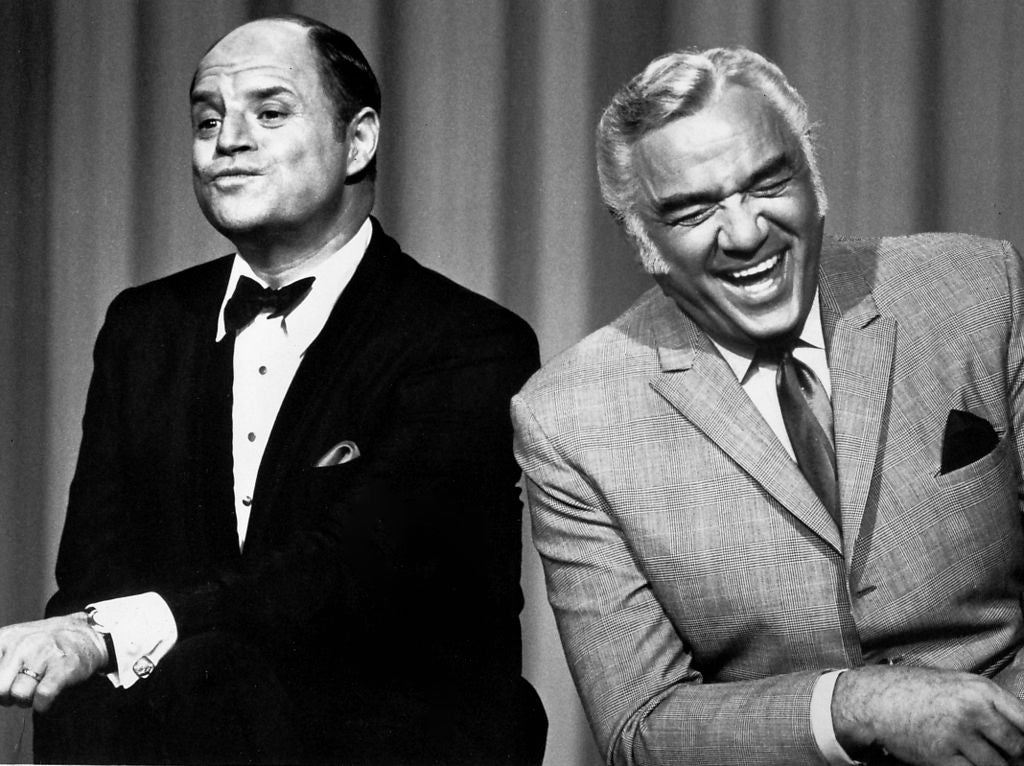 Rickles and Lorne Greene on The Don Rickles Show in 1968.

He would become perhaps the greatest caustic, warm, hateful, big-hearted comedian of all time. Born during the second administration of Calvin Coolidge, he would one day make fun of another president and have Ronald Reagan doubled-over from laughter.

At 18, the future “Mr. Warmth” enlisted in the U.S. Navy and served on a torpedo boat. As serious as the situation was, Rickles fighting in the Pacific must have been something like Lou Costello fighting Lee at Gettysburg. In fact, he saw action at New Guinea and Leyte.

Leyte in fact was one of the decisive battles of the war, a key island in the Philippines. American losses included 3,500 dead. The Japanese lost a staggering 79,000 men. Though Rickles wasn’t part of the Marine invasion, his torpedo boat, USS Cyrene, was an escort for two squadrons of motor torpedo boats, first to New Guinea, then on to escort duty at Leyte.

Rickles made the best of a tense situation.

“I got to know a lot of really good people on that boat, a lot of good memories. But that is not what I signed up for. One day we were out shooting the guns, and all you hear is this loud “Boom! Boom! Boom!” and I told the guy in charge, “Hey I can entertain, you need to send me over to Special Services.” You know what he said to me? “Keep firing!”

Seamen First Class Rickles was discharged two years later, still intent on entertaining troops. In years to come he would do just that, returning to theatres of war. In person, he was affable and friendly; his stage persona was developed over time.

His famous quip about his good friend Frank Sinatra (“I don’t mind kissing Frank’s ring, but it’s always in his back pocket”) was part of a decades-long good-natured ribbing the two turned into an ongoing act.

The 20mm guns he fired aboard the Cyrene were nothing compared to the barrage of insults and thigh-slappers he fired at audiences and unlucky celebrities. He was still going strong at the end, a 90-year-old legend and mentor to scores of other comedians.

During an appearance on the Craig Ferguson Show in 2013, Rickles suddenly launched into a routine befitting a fast-talking sailor.

“I was in the service. I was in there saving your canary!” He then got in a politically incorrect dig at Japanese soldiers; the audience roared. He repeated that he kept telling his superiors that he wanted to do comedy and entertain “But they [the enemy] kept attacking!”

He had been able to find humor even in a very difficult time.

“It was so hot and humid, the crew rotted,” he would deadpan.

Eventually, he studied at the American Academy of Dramatic Arts and it was here, in those early, lean years, that he proved himself to be adept not only at comedy, but drama when called upon. In 1958, he appeared in Run Silent, Run Deep with Burt Lancaster and Clark Gable. Ten years later he combined the comedy and drama for his role in Kelly’s Heroes, billed with star Clint Eastwood.

In his 60-year entertainment career, the boy from Queens reached unimaginable heights.

Apart from his fabled comedy career, Rickles would go on to star in a drama here and there. One of his most famous roles came in 1995 in Casino, as “rules enforcer” Billy Sherbert. At one point, a card player wins a large amount of money and Sherbert glares at him. The player turns on the diminutive Sherbert and pummels him.

It would be the only time in his career that Don Rickles—also known as The Merchant of Venom—was ever beaten to the punchline.