The Mandalorian is back! Season 2 Episode 1 recap - We Are The Mighty

The Mandalorian is back! Season 2 Episode 1 recap 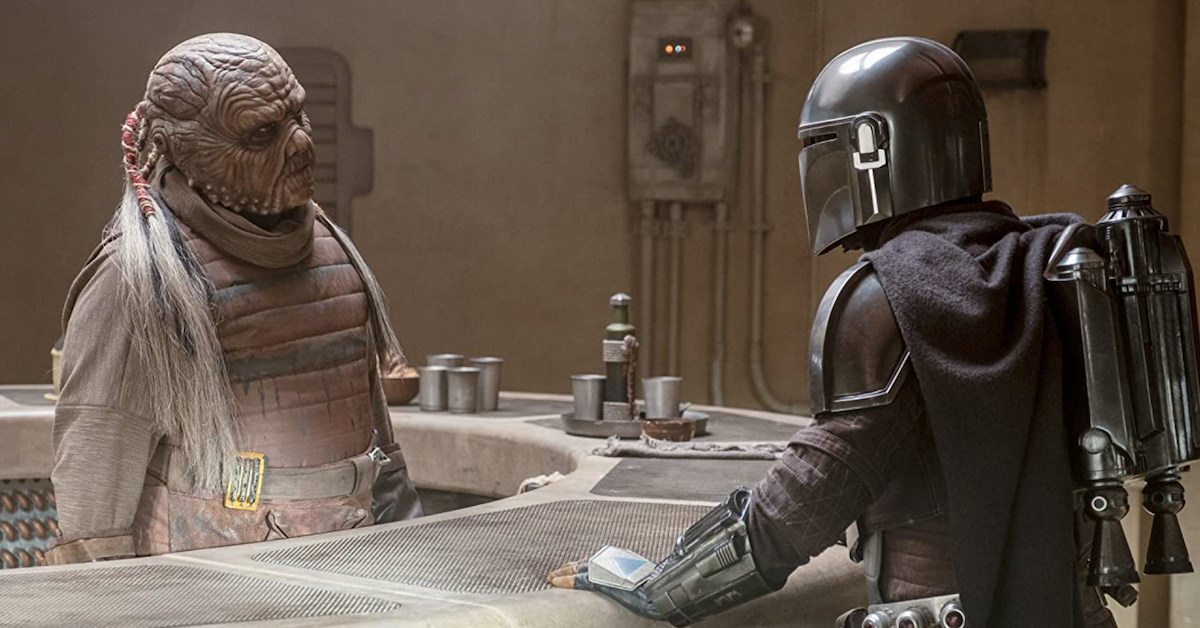 Our Mandalorian (Pedro Pascal) and the Yoda Baby (aka “The Child”) are back! Mando (I still hate that name) Din Djarin picks up where he left off at the end of season one: with a mission to find the ancient race of warriors who can move things with their minds in order to return the Yoda Baby to them.

If you need a recap of season one, check out the video below.
And remember, there are spoilers ahead through The Mandalorian, season two episode one.

Season two opens with our Mandalorian and the Yoda Baby entering a fighting pit, where the Twi’lek (isn’t it fun when the mere presence of an OC trilogy species serves as an easter egg?) bouncer doesn’t even blink at bringing a baby into the bar.

A cyclops alien promptly betrays Djarin and launches his ambush with the intent of stealing the fancy Beskar steel armor. (For a touch of humor, pay attention to the Gamorrean fighter in the background.) Naturally, the attackers are no match for our hero. His whistling birds take out the opposition en force, leaving Djarin to chase down the cyclops and demand the information he wanted: there is another Mandalorian on Tatooine.

The first question in everyone’s mind at this point is and should be: “We talkin’ Boba Fett?” After a cutesy reunion with Amy Sedaris’ Peli Motto, we head to an old mining community called Mos Pelgo where we meet “The Marshal” — a man wearing the armor of Boba Fett. When he removes his helmet, the jig is up for Djarin; the man is no Mandalorian. It’s also up for us — that pretty face ain’t Fett (who, habeas corpus, could still be running around out there…).

The Marshal, we learn, is Cobb Vanth, played by Timothy Olyphant (who I 100% thought was Josh Duhamel — guys I literally cannot tell the difference between these two men; all I know is I’m a fan of both).

Vanth has served as the protector of Mos Pelgo since the destruction of the Death Star when they were invaded by the Mining Collective. He fled their attack, managing to take a camtono (ie: fancy bucket) of silicax crystals.

Near-death in the Dune Sea, Vanth was rescued by Jawas, who (quite honorably, might I say) traded him Boba Fett’s armor and some water for them. With the armor, Vanth was able to defeat the invaders and maintain the peace in Mos Pelgo.

Except for the krayt dragon (and shame on writer/director Jon Favreau for using the peaceful-minding-its-own-business Bantha as the butt of a joke when its eaten by the dragon). Djarin and Vanth strike a deal: if Djarin helps kill the krayt dragon, Vanth will give up the armor. Djarin negotiates an uneasy peace with local Tusken Raiders and the people of Mos Pelgo and they lay their plan: bury explosives in the ground and lure the krayt dragon over the explosives to destroy it at its vulnerable belly.

After a lot of collateral damage, some Mandalorian jetpack action, and a lot of krayt venom vomit, Djarin managed to deliver the killing blow by strapping explosives on another poor Bantha (not cool, Favreau, especially after you took the time to show the Tusken Raiders brushing the gentle beast’s teeth — kill characters, not creatures) and decemating the dragon from within.

And with that, Vanth surrendered the armor, leaving Djarin to consider his next move. The final scene of the episode introduced a mysterious character who just might be the Fett we’ve been waiting for.

IMDb has already listed the character as Boba Fett, played by Temuera Morrison. In the expanded universe, Boba Fett survived his tumble into the sarlacc pit (aka the Pit of Carkoon); now it seems clear that we will be seeing more of the legendary bounty hunter.

Another expanded universe fun fact: Cobb Vanth had a run-in with a baby Hutt. Sounds like you missed an opportunity, Hasbro!