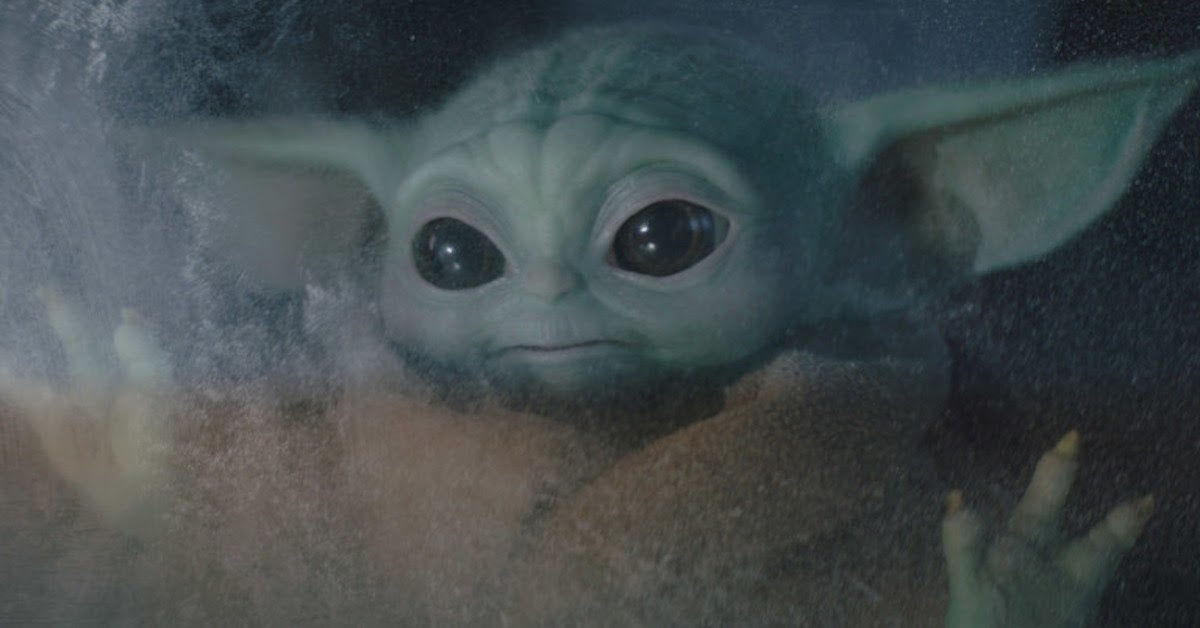 After leaving us with a fun (probable Boba Fett) easter egg last week, Chapter 10 opens with a meaningless action sequence that has no real consequence other than a long walk for Djarin (Pedro Pascal). The Yoda Baby is definitely going to need therapy if he’s going to be a wise Jedi leader — the kid has been thrown, concussed, and exposed to violence and murder a lot, you guys. Like, a lot.

Djarin is still searching for some Mandalorians and conveniently, Peli Motto (Amy Sedaris) just met a creature who has a lead. “The Frog Lady,” as she’s credited, needs secure passage to rendezvous with her husband in The System in order to fertilize her eggs — and in exchange, her husband will tell Djarin where he might find a Mandalorian cohort.

In the ship, the Yoda Baby is left alone with the eggs and here’s what I wrote in my notes: “I’m legit worried that Yoda Baby will eat the spawn…ew, Jesus, I was right.” This became a running joke(???) throughout the episode that was extremely problematic. The Frog Lady has made it clear that her only hope to prevent extinction is to reunite with her husband so he can fertilize her eggs and they can reproduce.

In other words, those eggs are her unborn children. To imply that it’s funny or cute that The Child keeps eating them, keeps literally murdering them, is very obtuse coming from a male writer and male director. It makes my skin crawl. Such a crime and violation should be treated with the severity of when Starbuck’s ovary was surgically cut out from her while she was imprisoned by Cyclons in Battlestar Galactica.

The Frog Lady was dehumanized and her desire to have children was treated as a joke. Considering how few female characters there even are in the series (it has yet to pass the Bechdel Test — though it received praise for hiring female directors), it further displays how tone-deaf stories can be when women are shut out of telling them.

During their space flight, Djarin and his cargo were intercepted by two New Republic X-Wings who started asking too many questions for Djarin’s comfort. In an effort to evade them, he crashed on an ice planet, wrecking the hull of his Razor Crest. While he sought to repair it, his cargo made some decisions.

The Frog Lady decided to take a hot spring dip with her eggs while the Yoda Baby decided to eat some eggs he discovered in the ice caves. Inside the eggs were calamari-looking spiders and the whole scene was disgusting — but not as bad as what came next.

The hundreds of eggs reacted and began to hatch, joined by creatures Star Wars Rebels fans will recognize as Krykna — giant (ice) spiders.

Hundreds of Krykna then scuttled after the trio, ranging from babies to horse-sized spiders, to enormous monsters that were heavier than Djarin’s ship. It was tense and gross. They were saved at last by the return of the X-Wings, who had checked in on Djarin’s records and determined that he wasn’t a bad guy.

After slaying the hordes of Krykna, the pilots left Djarin to repair his ship and limp his shaky way to The Frog Man.

Ughhhh I hate it.