The many shows of World War II veteran Rod Serling 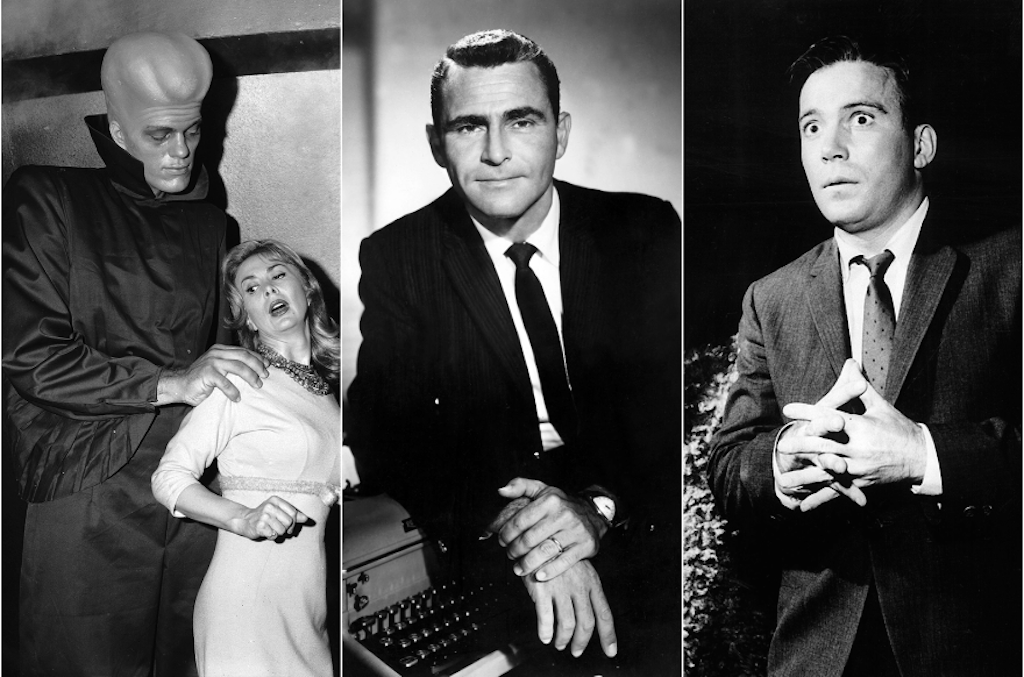 Serling with a couple of scenes from his best The Twilight Zone episodes.

Rod Serling is most known for his series The Twilight Zone after having worked for years as a writer across different shows on TV such as Playhouse 90 and Kraft Television Theater. He finally got his big break with the series for CBS on October 2, 1959. Serling also wrote screenplays and adapted works to the cinema as well. These include the adaptations of the original The Planet of the Apes, The Yellow Canary and Seven Days in May. His original screenplays include a western, Saddle the Wind, a boxing teleplay turned feature film, Requiem for a Heavyweight, and another teleplay turned feature, Patterns. Much of his creative engine for writing stemmed from his wartime experiences in the Army during World War II in the Pacific Campaign.

These are the many shows of Rod Serling

A seminal series for TV in the genres of science fiction, fantasy, paranormal and horror which ran for 156 episodes, Serling is credited with writing or co-writing 92 of them. The show is considered by the Writers Guild of America to be the third best-written TV series ever. It is ranked in the top five in multiple genres (drama, sci-fi and overall) by TV Guide. Key episodes in the series are To Serve Man, It’s a Good Life, The Monsters Are Due on Maple Street, Eye of the Beholder and Nightmare at 20,000 Feet. The last episode is a pivotal part of William Shatner’s career as he plays an airline traveler terrorized by a gremlin on the outside wing of the aircraft in which he is flying. Shatner would then go on to Star Trek fame. Many young and older stars worked on the show such as Carol Burnett, George Takei, Buster Keaton, Julie Newmar, Robert Duvall, Burgess Meredith, Lee Marvin, Robert Redford and Burt Reynolds. Many of the show’s stars were World War II or Korean War veterans themselves, which many times adds to the realism of the episode. The entire series can be streamed, which is worth a watch!

Serling’s next TV show outing was a western, which may seem out of the norm today, however it was quite common back in the 1960s as westerns were in their heyday. The series followed the travels of a Civil War cavalry captain who goes through the American West to find his new life. The show starred Lloyd Bridges (yes the dad of Jeff and Beau) as the veteran character of the Old West. Of note, Bridges served in the Coast Guard during World War II and then in the USCG Auxiliary after the war. It appears he retired as a Commodore from the Coast Guard Auxiliary. The series was noted for being a realistic Western, which was likely ahead of its time as it only lasted one season for 26 episodes. It was also one of the last black-and-white series for CBS.

Serling’s next and final series was the Night Gallery which has stories that were more horror-centric. Although popular and it ran for three seasons, it was not the big hit that his first show had been. Night Gallery focused more on supernatural dark fantasy as opposed to science fiction with The Twilight Zone. He is credited with 50 episodes of the series and as the creator. Top episodes include The Caterpillar, Certain Shadows on the Wall, Cool Air and Lone Survivor. The latter is about a ship that rescues a man from a lifeboat labeled “Titanic” which is set three years after the liner sank. It is an eerie episode with a twist ending as to be expected. The Night Gallery segment Eyes was directed by a young Steven Spielberg as well. Stars who appeared in the series include Joan Crawford, Burgess Meredith, Desi Arnaz, Patty Duke, Zsa Zsa Gabor, Orson Welles, Vincent Price, Diane Keaton Adam West, Mickey Rooney and Cloris Leachman. The series is also available on streaming and worth checking out.