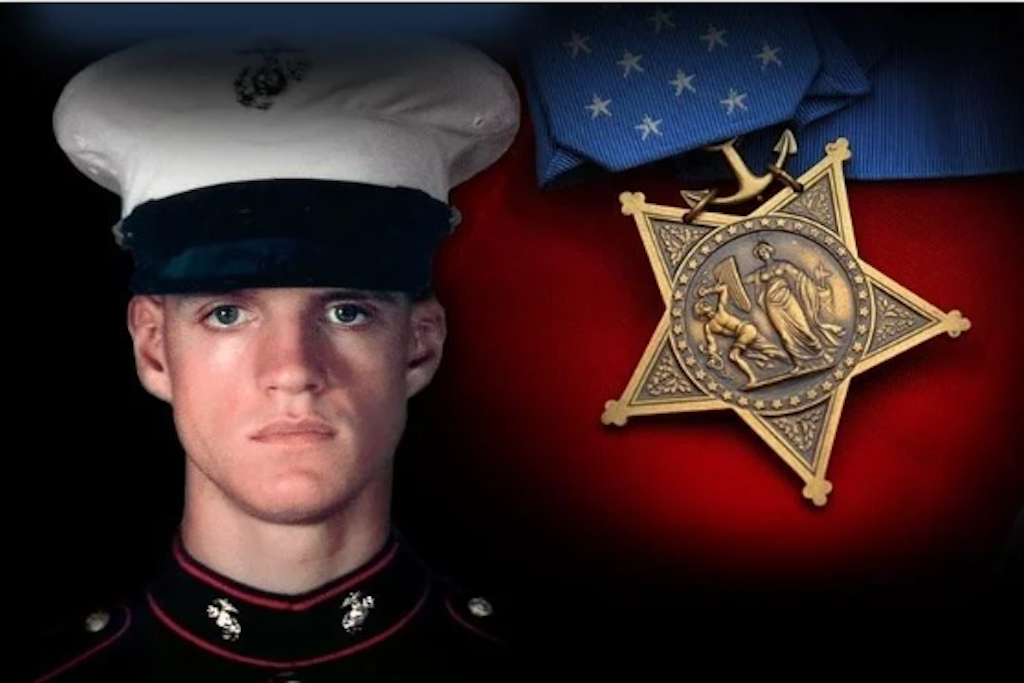 The heroics of Corporal Jason Dunham creates a timeless story that our country needs to honor and keep in mind as we move forward. Dunham served with the 3rd Battalion, 7th Marines in the Iraq War and was killed when he covered an enemy grenade with his Kevlar helmet to save Marines close by. He was seriously wounded and died eight days later. Dunham was posthumously awarded the Medal of Honor for his actions.

Director David Kniess and his team of producers, Anthony Taylor, Vincent Vargas and Chase Peel bring Dunham’s story, his impact on his Marines and his family’s healing to the screen. Kniess was awarded the Santini Patriot Spirit Award by the Beaufort International Film Festival for his work with The Gift. The “Santini” is awarded to that filmmaker whose portrayal of the American active duty military, veterans, or their families in a feature film, documentary, or short reflects the highest standards of service and sacrifice for the good of others.

The documentary is well-paced and offers us insights mostly unseen in military-focused documentaries, especially the gritty realities once veterans return home with trauma. We get to know more about who Dunham was and how his friends and family members still honor his memory to this day. His parents Dan and Deb share the lasting legacy of their son and how he still positively impacts to this day. They also share their difficulty when making the decision to take Dunham off of life support after he had been brought back to the US and was being cared for at the National Naval Medical Center in Bethesda, Maryland. “The Gift” will come out via streaming platforms in late December 2022.

The documentary delves into how Dunham had a traditional family-focused upbringing in Scio, New York, which is in the eastern part of the state of New York. His father Dan stressed responsibility and leadership, which are traits Dunham carried with him as a son and brother and through his service in Iraq in the Marines. The key traits Dan and Deb taught him were further strengthened in the Corps and ultimately seen on the field of battle with his sacrifice in the concern for the welfare of his Marines. Dan, Deb and Dunham’s siblings share about growing up with him, how he changed their lives for the better and how much they miss him.

Dunham’s fellow Marines, both officer and enlisted, share numerous examples of his leadership, poise and maturity before the tragic and heroic events that took his life. Dunham was known to take charge, initiative and responsibility in the absence of direct leadership, which is a core tenet of Corps leadership. His calm confidence earned the trust and respect of his Marines. The documentary also goes into the suffering of the Marines who served with him and their own struggles with addiction, alcoholism, PTSD and even worse upon coming home from deployment and/or leaving the Corps. Throughout the documentary elements of faith and spirituality are sprinkled by those who cared most for him. Even with all of the trauma and his untimely passing, they have found healing and meaning.

Kniess and his producers’ work is a personal one, which shines brightly throughout the entire documentary. We feel for the family and friends as they recall so many heartfelt stories of Dunham. It is great to see a documentary made by military veterans that hits all of the right notes and is made with dignity toward those directly involved and the family back home. It is close to Kniess himself as he had a chance meeting with Corporal Dunham which led to a life-long friendship with the Dunham family and the Marines who formed the core group of Kilo Company, 3rd Battalion, 7th Marines. We get to see some strong and engaging cinematography with a fitting and noble musical score as well. Beautiful views of Scio, NY, and other locations with rich colors provide visual positivity in light of the serious tone of the film.

Corporal Dunham’s legacy has been honored in many ways including through the Arleigh-Burke class destroy USS Jason Dunham (DDG-109), the Crucible warrior’s station at both Marine Corps Recruit Depots in Parris Island, SC, and San Diego, CA, are named after him, the naming of Marine Corps Security Force Barracks at Naval Submarine Base Kings Bay Georgia after him, the Cpl Dunham Room at the Corporals Course at Marine Corps Air Station Beaufort, SC, the US Post Office in his hometown of Scio, NY is now named the Corporal Jason L. Dunham Post Office, the Marine Corps League Chapter in Palm Desert, CA and a chapter of the Leathernecks Motorcycle Club International being named after him and Dunham Hall, which is a Marine Corps dining facility at Marine Corps Air Ground Combat Center in Twentynine Palms.

His full Medal of Honor citation includes, “For conspicuous gallantry and intrepidity at the risk of his life above and beyond the call of duty while serving as Rifle Squad Leader, 4th Platoon, Company K, Third Battalion, Seventh Marines (Reinforced), Regimental Combat Team 7, First Marine Division (Reinforced), on 14 April 2004. Corporal Dunham’s squad was conducting a reconnaissance mission in the town of Karabilah, Iraq, when they heard rocket-propelled grenade and small arms fire erupt approximately two kilometers to the west. Corporal Dunham led his Combined Anti-Armor Team towards the engagement to provide fire support to their Battalion Commander’s convoy, which had been ambushed as it was traveling to Camp Husaybah. As Corporal Dunham and his Marines advanced, they quickly began to receive enemy fire.

In an ultimate and selfless act of bravery in which he was mortally wounded, he saved the lives of at least two fellow Marines. By his undaunted courage, intrepid fighting spirit, and unwavering devotion to duty, Corporal Jason Dunham gallantly gave his life for his country, thereby reflecting great credit upon himself and upholding the highest traditions of the Marine Corps and the United States Naval Service”.”

Learn more about the documentary, set to be released by early February of 2023, here.