When Netanyahu emerged from the Bible and into the modern world

Netanyahu’s brush with death during a plane hijacking 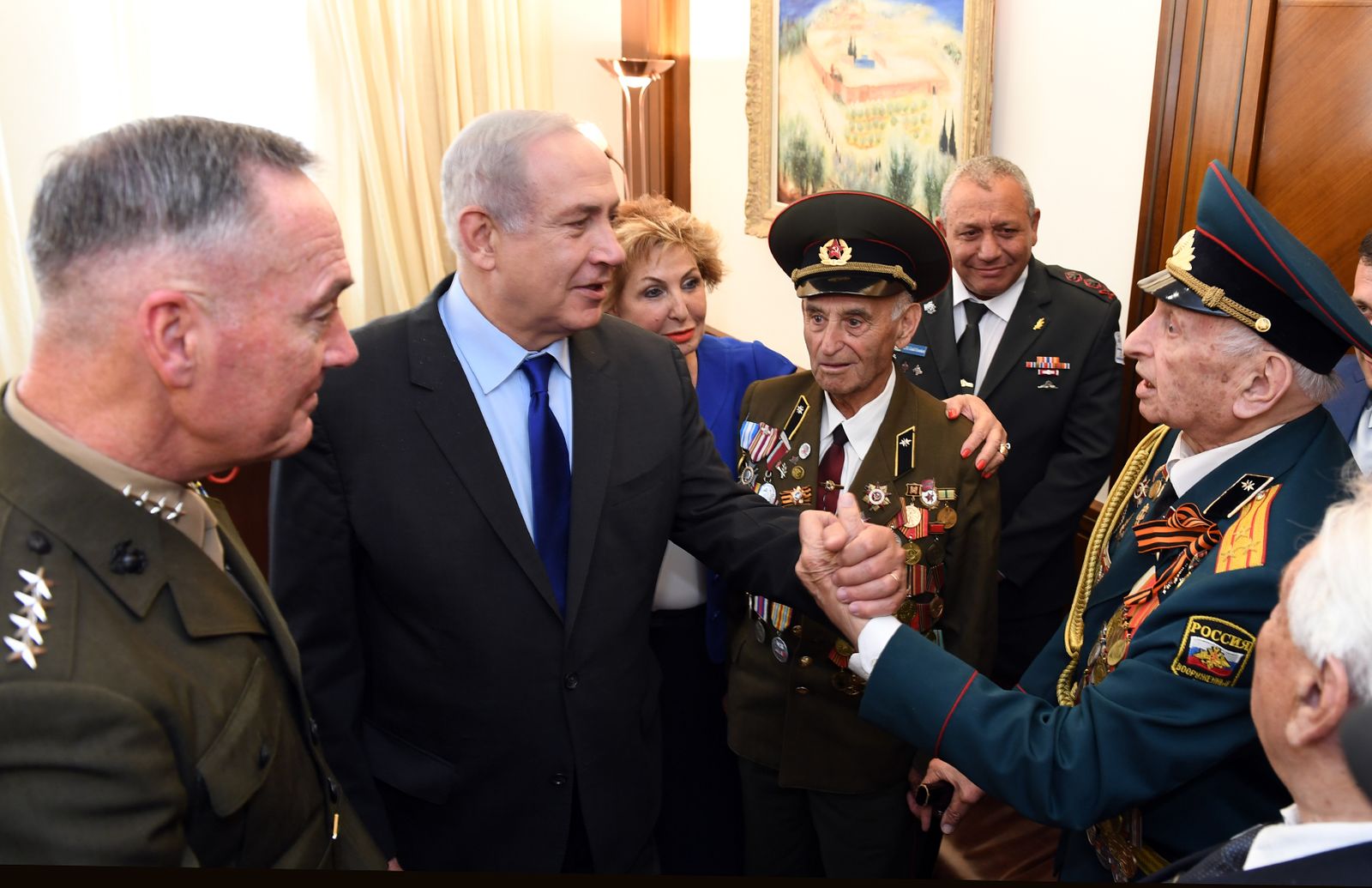 Chairman of the Joint Chiefs of Staff, General Joseph Dunford, meets with Israeli Prime Minister Benjamin Netanyahu in his office in Jerusalem, and then tours Yad Vashem Holocaust Museum and lays a wreath at the Hall of Remembrance in memory of the victims of the Holocaust. (2017).

It’s not terribly uncommon for heads of state to have seen combat in war. In fact, many of the most famous have toiled in those stretches of madness and death. George Herbert Walker Bush, ironically mocked by some as being weak, was a fierce warrior during World War II, risking his life many times as a fighter pilot. Famous footage of Bush being pulled out of the Pacific and onto a warship after his plane crashed shows a weary but determined young officer being helped to sick bay.

Some actually look for the “glory” and “sting of battle,” such as Teddy Roosevelt, who really did charge up San Juan Hill, leading his men in a glorious dash to the summit.

Ariel “Arik” Sharon in Israel is another example. Fighting in all of Israel’s modern wars, Sharon eventually became prime minister. Oftentimes, war heroes don’t translate so well to politics (unlike John F. Kennedy, whose urbane manner carried him through the PT-109 days, where he demonstrated rare leadership traits, to a successful if too-short presidency).

One modern example of a courage in battle carrying-over to the political world is that of Benjamin “Bibi” Netanyahu, the son of a Zionist icon. The younger Netanyahu, the middle of three brothers that would all serve in Israel’s elite counter-terrorism unit, Sayeret Matkal, was born for battle on the battlefield and in international diplomacy. In certain ways, Netanyahu has seemed almost like a Biblical figure, a leader from old.

Born a year after Israel’s statehood, Bibi Netanyahu was probably headed for a career in finance or some such after his military service was ended, but a terrible hostage rescue in Africa changed all that. His older brother, Jonathan, led the Unit against a gang of terrorists holding 105 Jewish airline passengers in Uganda. “Yoni’s” death (he was the only Israeli soldier killed in the otherwise successful raid) deeply impacted his family. Bibi switched his interests from economics to politics. In time he served as a top diplomat in Washington and then prepped for a run at the premiership.

Before all that though, he followed the rest of his family into harm’s way in defending their people in their ancestral homeland. Steeped in Zionism at the family dining table at the stone house in the Talpiot neighborhood of Jerusalem, Bibi sought to use his worldview to better the nation. That first meant picking up a weapon and defending against terrorists and various bad actors in the Middle East.

Although he had participated in many actions prior, his leadership of the Unit during the Sabena airline hijacking in Tel Aviv propelled him into other leadership roles. It occurred just months before the infamous 1972 Munich Olympics, in which Palestinian terrorists kidnapped and murdered 11 Israeli athletes. The atmosphere during that entire era was tense continually, and hijackings became the preferred action by terrorists—326 between 1968 and 1972.

Netanyahu tells the story of the Sabena incident in his new book, Bibi: My Story.

The flight originated in Belgium and ended at Lod Airport. When the plane landed in Tel Aviv, the Unit immediately flew into action planning a rescue, as the government pretended to negotiate with the terrorists. The Unit quickly practiced storming an identical plane in a nearby hangar. Then a remarkable element emerges from the story; Yoni, also a member of the Unit, paced nearby, eager to get in on the action. Bibi had to talk him down, appealing to his sense of their parents’ wellbeing, should one or both of them be killed. Finally, perhaps for the only time in his life, Yoni stood down.

The Israelis are always enormously detail-oriented and plan in exact detail. The overall plan was to dress Unit members in white coveralls and present them as mechanics making sure the flight was ready for takeoff, as if the demands were going to be met. The Red Cross agreed to set up a fake checkpoint within sight of the terrorists watching from airplane windows, ostensibly “checking for weapons.” This lowered the terrorists’ guard. Several busloads of men were also driven onto the tarmac, the passengers posing as released terrorists ready for a flight to freedom.

When the signal was given, Bibi and his men rushed the doors. The entire operation took only two minutes. The two male terrorists were killed; the two women captured. Two passengers were killed in the crossfire.

Bibi himself was struck in the arm by a bullet, which he said felt like he’d been hit with a sledgehammer. He was laid on the tarmac and given a quick injection of morphine. Yoni came running over, a look of worry on his face as he saw the red blood on his brother’s white coveralls.

Through it all, the voice of his father has always been in his ear and in his heart. Benzion, who died in 2012 at 102, once gave his son some sage advice:

Those words have served the son quite well the past 50-odd years in a political career that has defied the odds—Netanyahu is now the longest-serving prime minister in the country’s history.

Among the blood and treasure he’s seen won and lost over the years, on a variety of battlefields, Bibi Netanyahu is linked to his family and countrymen by blood.

He understands just how precious it really is.