Everything you need to know about China’s new space station 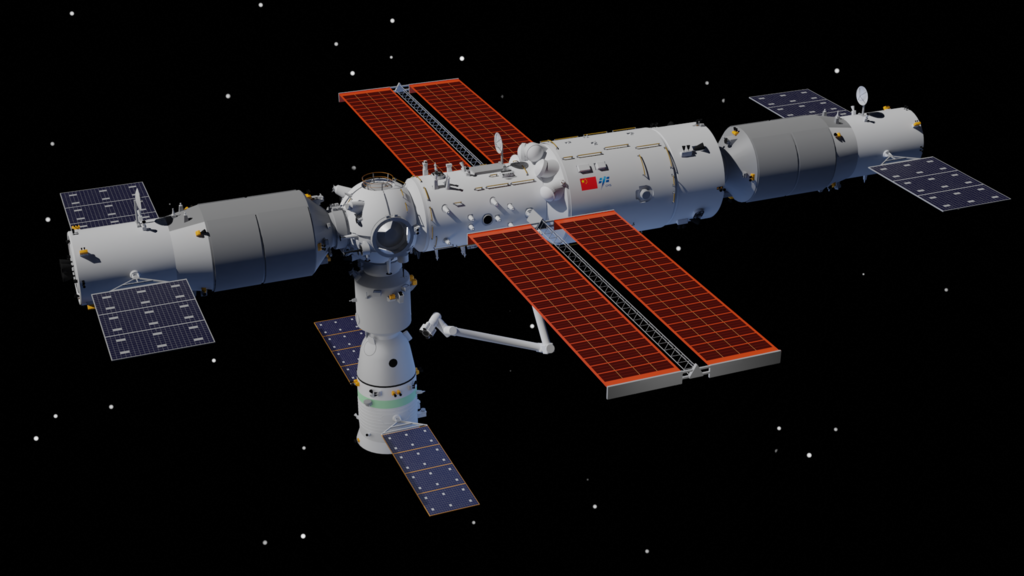 Rendering of Tiangong Space Station in October 2021, with Tianhe core module in the middle, Tianzhou at two ends and Shenzhou at nadir.

The Space Race is long over and the United States remains the undisputed champion of the world, but China is getting in on the orbital action by building a space station of their own. The People’s Republic has publicly declared that construction of its Tiangong Space Station will be completed in 2022, along with an estimated 40 launches into orbit.

China is not a signatory to the International Space Station, which is a joint effort between the U.S., Russia, Japan, Canada, Brazil, India, South Korea, and eleven member states of the European Space Agency. China has its own program, the China Manned Space Program, which is run by the Chinese military and launched an experimental station in 2011.

In 2021, China began launching modules for its 11-part space station, called Tiangong. The first model to take orbit was the station’s crew quarters and completion of the effort will require 10 more launches. Chinese state media, Xinhua News Agency, announced those 10 launches will take place in 2022.

The People’s Republic is making the trips as it ramps up its efforts to become a leader in space experimentation and exploration. The United States also plans to complete 10 launches in 2022, as it prepares for an effort to return to conducting lunar missions.

The Tiangong Space Station is China’s third attempt at placing a permanently manned structure in lower earth orbit and was the third country to put a human in space all on its own, after Russia and the United States, finally completing the task in 2003. Since then, the country has carried out experiments, space walks, and docking procedures with the orbital platform.

China has also carried out a number of unmanned space missions, including sending a probe to take photos of the lunar surface.

While China has expressed an interest in joining the International Space Station, objections from the United States have kept other signatories from entertaining the idea of Chinese collaboration. In 2011, the U.S. passed a law that prevents NASA from using government funds to engage in bilateral cooperation with the Chinese government or China affiliated organizations unless authorized by the FBI and by Congress.

As early as 2010, European Space Agency Director-General Jean-Jacques Dordain stated publicly that the ESA’s member countries were ready to invite China to the ISS effort, but the United States ended any possible cooperation through its own legislation. The United States is concerned about technology transfers that would benefit the Chinese military. NASA is even prevented from using federal funding to host Chinese officials at NASA facilities.

The United States had similar concerns about Russian involvement in the ISS program, but became dependent on the Russian Space Agency to ferry astronauts to and from the station after NASA’s space shuttle fleet was finally retired in 2011.

China’s current space station crew is the second to board its space station, and successfully docked, undocked, and redocked a Tianzhou-2 cargo craft with the station for the first time ever. The crew will be aboard the station for six months, the longest mission for Chinese astronauts since the country’s first space mission in 2003.

Once completed, the station will be a quarter of the size of the International Space Station and will weigh 66 tons. The ISS, first launched in 1998, weighs around 450 tons.