Old NASA satellites are returning to Earth, but the danger to humans is minimal 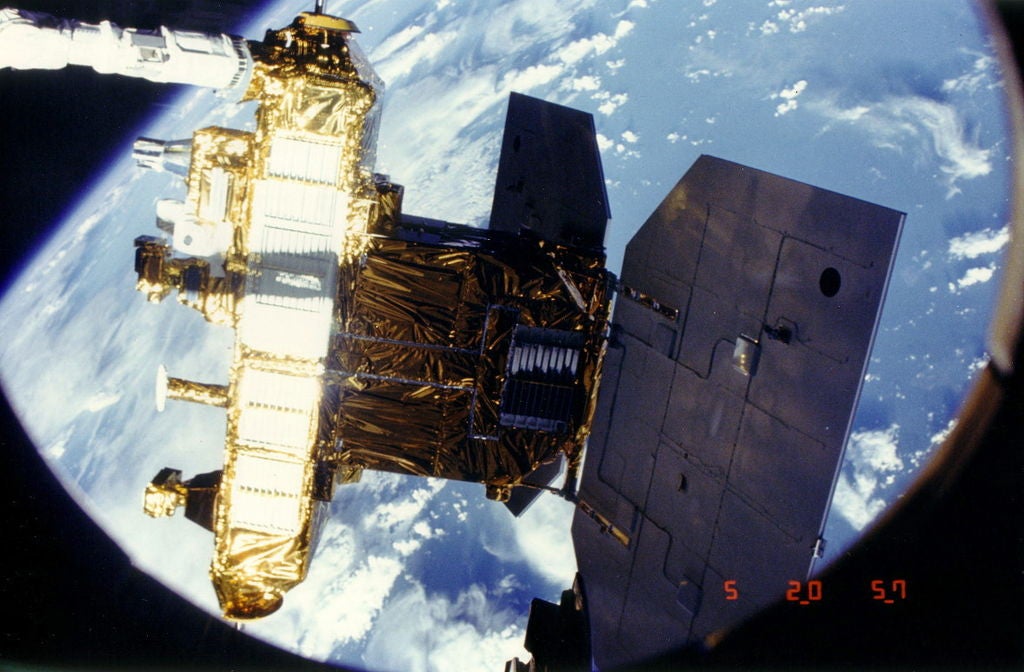 ERBS during deployment on STS-41-G.

On January 8, 2023, a nearly 40-year old retired satellite weighing more than two tons began to fall out of low-earth orbit and back to the cradle of mankind. Its course had it falling on a track passing over Africa, Asia, the Middle East, and the westernmost areas of North and South America. That’s a lot of potential targets to hit on the way down. But researchers agree that the probability of being struck by falling satellite debris is very low for us targets here on Earth. NASA put the odds of injury from falling debris at about 1-in-9,400, roughly similar odds of being seriously injured by your toilet.

The Earth Radiation Budget Satellite (ERBS) was first launched in 1984 aboard the Space Shuttle Challenger. It was released into orbit using Challenger’s robotic arm, which was then operated by Sally Ride, the first American woman in space. It was her second and final trip to space. Also aboard the shuttle that mission was Kathryn Sullivan, who made the first spacewalk conducted by an American woman. It was also the first time two women were in space together.

Only expected to work for two years, the ERBS instead collected information about climate health, weather patterns, and the ozone layer for the next 38 years. It carried the instruments necessary for the Stratospheric Aerosol and Gas Experiment II (SAGE II), which confirmed worldwide concerns about the depletion of the ozone layer. A follow-up experiment, SAGE III, is being conducted aboard the International Space Station.

When the ERBS finally made its final descent, it really did cause no damage and inflicted no casualties. It landed harmlessly in the Bering Sea, a few hundred miles off the coast of Alaska. As predicted, much of what was left of the ERBS was burned up by friction upon reentry into the atmosphere. But that’s not the only piece of space debris falling back to Earth lately.

In 2022, a Chinese-built Long March 5B rocket experienced an uncontrolled return to Earth, ending up somewhere near Malaysia. Meanwhile, debris from a SpaceX Crew-1 mission found its way to New South Wales, Australia. Along with anti-satellite missile tests, private spacecraft tests, and disused satellites and other orbital structures, it seems like it’s getting pretty crowded up there. What goes up, must come down, right?

It’s well-known that orbital space debris is a hazard to satellites and manned spacecraft, such as the International Space Station. The ISS has to make hundreds of anti-debris maneuvers in the course of a given year. An increase in the amount of things going to space is only going to mean an increase in the number of things coming back from space uncontrollably, whether by design or by accident.

When they come back, it’s often unknowable where exactly they might land, although educated guesses can be made using weather patterns and other data. Still, the increase in falling junk may also mean an increased likelihood of that debris coming back down and hitting one of us terrestrial humans. While the likelihood of it hitting anyone is around one in 10,000, the odds of it hitting a specific person are about one in a trillion.

The only person who was ever hit by falling space debris was Tulsa, Oklahoma’s Lottie Williams. In 1997, she was hit in the shoulder by a remnant of a Delta III rocket. It did no damage to her person. She simply picked it up, took it home and reported it to officials the next day.