How a ragtag band of civilians got strong for service women 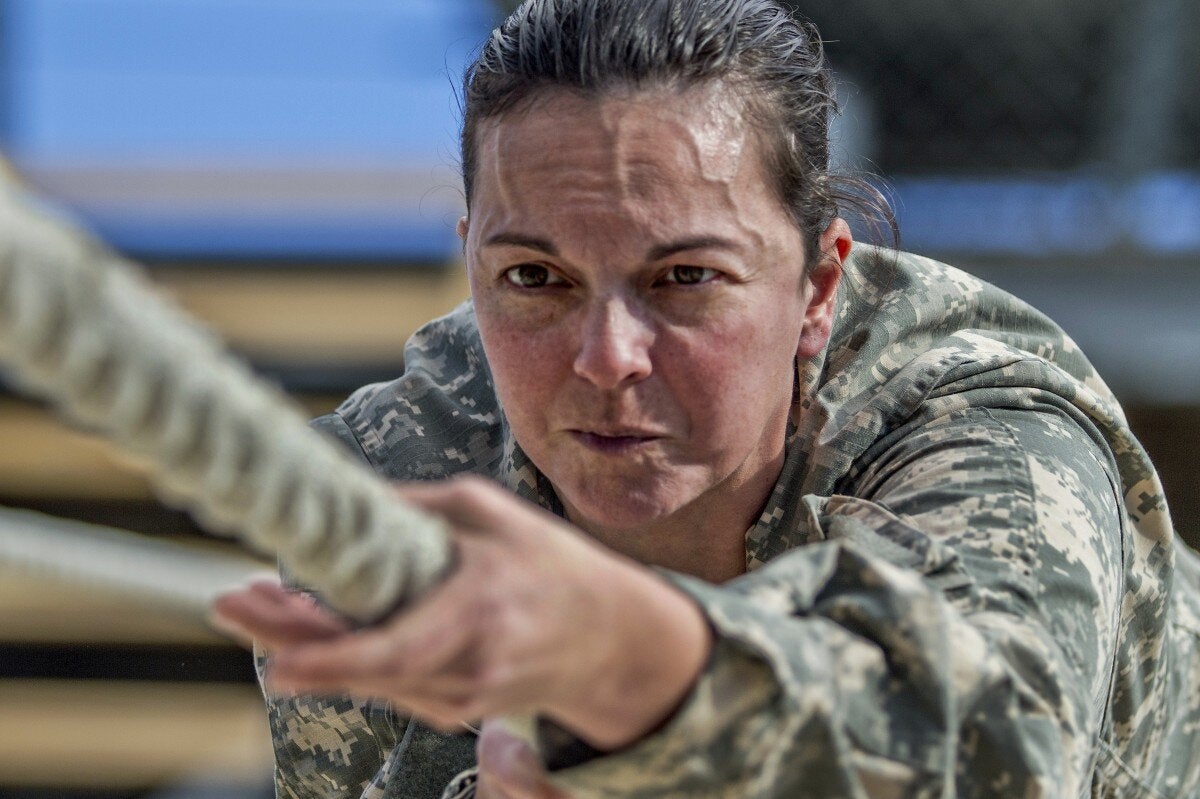 On the day I reported for duty as a volunteer in an extreme Army experiment of women’s strength, I stopped my car at the gate, watched the guard approaching, and thought about turning around. I’d seen the movies. I’d watched A Few Good Men and Private Benjamin and winced at the exhausting runs, pushups, shouting by grouchy drill instructors and general toughness required to thrive on a military base. I was a civilian at the edge of a world full of camo and shorn heads and running in formation and all I could think was, Do I have what it takes to get through this?

It was May of 1995, and scientists at the U.S. Army Research Institute of Environmental Medicine (USARIEM) on the U.S. Army Soldier Systems Command (USASSC) base in Natick, Massachusetts, were kicking off a seminal study to determine if women could get strong enough to perform the toughest military tasks usually assigned to men. With only one female soldier available for the seven-month program, the scientists had recruited 45 ordinary civilians. I was a 24-year-old cub reporter in average shape who loathed running. It was time to put on my big-girl pants and push myself past my limits.

From the start, our ragtag band of women seemed an unlikely crew to take on such a lofty pursuit. More weekend walkers than G.I. Janes, we came to the base at varying fitness levels, shapes and sizes, and our ranks included stay-at-home moms, teachers, a landscaper, a student, a prison guard, a bartender and one journalist. But with mighty hearts and iron will, we intended to smash through those expectations. They said women couldn’t do it. We hit back: Watch me.

We did everything asked of us and more. I strapped on a 75-pound backpack and hiked two miles over rugged terrain, and though I ended up shuffling more than running the first time, I finished (albeit with shredded heels and blood blisters). I ran until I was sick while dragging a 110-pound trailer through thick woods and a meadow choked with weeds and wildflowers. I lifted more, more, more each week, carried sandbags and heavy metal boxes until my hands were calloused, pushed through five-mile backpack hikes and sprinted up steep hills.

I was honored to carry water for the women doing the work of defending our country, and I felt pressure to show up for them—a lot of people were watching us, after all. The experiment had made international headlines even before it began when a controversy about women in combat almost shut us down, and now the big TV networks were pressing for access to the base to film us in action (they never got it—my newspaper had the exclusive). At the time, females were still banned from most ground combat roles. I knew that on average we possess around 50 to 60 percent of males’ upper body strength, but I also knew women who could perform incredible physical feats. I didn’t think it was fair for anyone to be banned from a job based on averages.

The test subjects formed fast, tight friendships to help get us through the rigorous training regimen and quickly developed our own rallying cry. In the first week, one of us blurted, “Do what?” when told to do something that seemed near impossible. “F— that!” I replied under my breath. For the rest of the study, we’d shout that call and answer to get psyched up before our toughest tests. Everyone on post knew who we were, and for a long time I noted skeptical glances and heard a snide remark or two while running through the base. But by the end, the soldiers, officers and civilian personnel were openly cheering us on.

This week marks exactly 25 years since the research scientists who designed the study, principal investigator Everett Harman and Pete Frykman, released their results. The full story of our journey is a little-known piece of military history that will be told for the first time in my forthcoming book The Strong Ones: How a Band of Civilian Women Made Their Mark on the Army, out February 9.

Spoiler alert: We did it. The data showed 78 percent of test subjects could now qualify for Army jobs categorized as “very heavy,” in which soldiers must occasionally lift 100 pounds, whereas only 24 percent could at the beginning. We also showed a 33 percent improvement on the 75-pound backpack test, going from 36 minutes to 27.5 minutes for two miles. And we did it all efficiently by training 1 ½ hours a day, five days a week.

In 2016 when I learned all military jobs were opened up to women, I began my research for The Strong Ones to find out how we might have helped change things. I won’t give away the ending, but I will say the test subjects affected future military women in more ways than one.

It’s been inspiring to watch women kicking butt in so many new roles in every branch over the past few years, and interesting to hear more than a few I’ve met along the way hit back at their doubters the same way we did back then: Watch me.

For a sneak peak, see The Strong Ones book trailer below.