Everything you need to know about the MLK Memorial, the Mall’s newest monument - We Are The Mighty

Everything you need to know about the MLK Memorial, the Mall’s newest monument 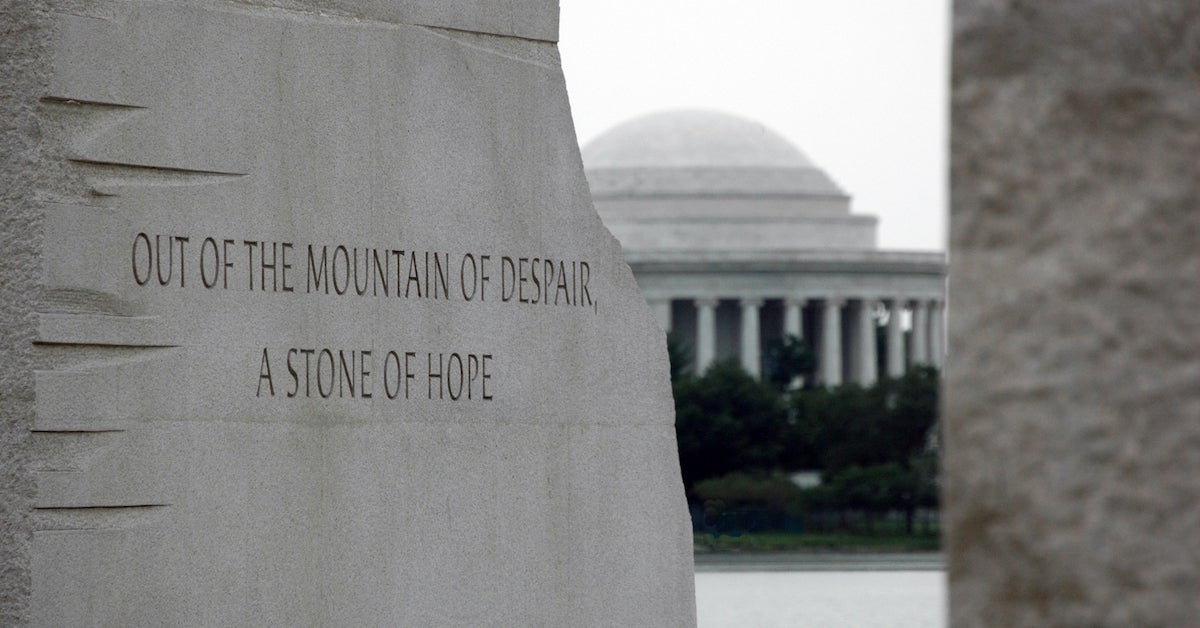 Adjacent to the FDR Memorial, the Martin Luther King, Jr. Memorial sits on a four-acre site along the National Mall’s Tidal Basin. It shares a direct site line between the Lincoln and the Jefferson memorials.

The MLK memorial is one of the few at the Mall to have an official address. Its address is 1964 Independence Avenue, SW, in honor of the Civil Rights Act of 1964.

Dr. Martin Luther King, Jr. was a prominent leader of the Civil Rights Movement during the 1960s. He became an iconic figure because of his use of nonviolent resistance and powerfully moving speeches. King led the March on Washington in 1963, where he gave his legendary “I Have a Dream” speech on the Lincoln Memorial’s steps. The bas-relief statue is intended to give the impression that King overlooks the Tidal Basin toward the horizon. Cherry trees that are at the site bloom every year during the anniversary of King’s death.

The memorial opened in 2011 after more than twenty years of planning, fundraising, and construction, making it the newest at the National Mall. It’s the fourth in Washington, DC, to honor a non-president and the first to honor a man of color. The site is designed to be a lasting tribute to Dr. King’s legacy. This isn’t the first memorial to a person of color in Washington DC, but it is the first memorial of a person of color o or near the National Mall. Dr. King’s memorial is the fourth non-president to be memorialized in such a way.

The centerpiece of the memorial is a 30-foot statue of Dr. King. His likeness is carved into the Stone of Hope and emerges from two large boulders, the “Mountains of Despair.” Text from the “I Have a Dream” speech is cut into the rock of the Stone. “Out of the mountain of despair, a stone of hope.” A 450-foot long inscription wall includes excerpts from King’s sermons and speeches. On the crescent-shaped wall, fourteen of King’s quotes are inscribed, the earliest from the 1955 Montgomery bus boycott in Alabama and the last from his final sermon in 1968, delivered at the National Cathedral in Washington DC, just four days before his assassination.

The memorial is the result of the early efforts of Alpha Phi Alpha fraternity. King was a member of that fraternity while he attended Boston University to complete his doctorate. King was heavily involved with the fraternity after he graduated. He delivered the keynote speech at the fraternity’s 50th-anniversary banquet in 1956. In 1968 after King’s assassination, Alpha Phi Alpha proposed erecting a memorial for Dr. King in Washington, DC.

In 1996, Congress authorized the Secretary of the Interior to allow Alpha Phi Alpha to create a memorial on the Department of Interior Lands in the District of Columbia. Congress gave the fraternity until 2003 to raise $100 million and break ground. Two years later, the Washington DC Martin Luther King Jr. National Memorial Project Foundation, Inc was established to manage the memorial’s fundraising efforts and design.

In 1999, the US Commission of Fine Arts and the National Capital Planning Commission approved the memorial’s site location.

ROMA Design Group was selected out of 900 candidates from 52 countries to create the memorial. On December 4, 2000, a marble and bronze plaque was laid by Alpha Phi Alpha members to dedicate the site. Shortly after, a full-time fundraising team began the promotional campaign for the memorial. The groundbreaking ceremony was held on November 13, 3006, in West Potomac Park.

By August 2008, leaders at the foundation estimated it would take an additional 20 months to construct the memorial with a final cost of $120 million. By December of that year, the foundation had raised about $108 million, including contributions from celebrities, large corporations, and other nonprofits, as well as the NBA, NFL, and filmmakers George Lucas and Steven Spielberg. US Congress provided $10 million in matching funds as well.

Construction began in December 2009 and was completed two years later. As with all other memorials at the National Mall, the MLK memorial is free and open to the public.