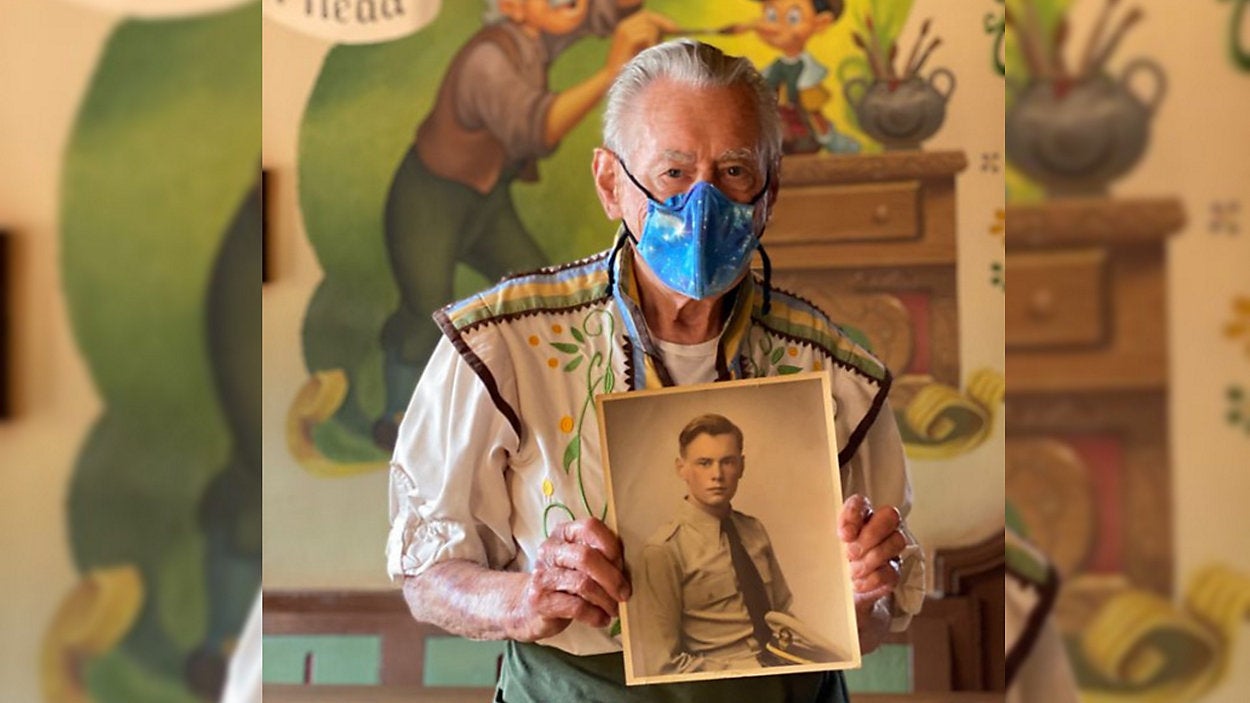 Alex Stromski, a Disney World cast member and U.S. Navy veteran, holds a 1950 photo of himself in uniform. (Disney).

Walt Disney and the Disney Company have always been a strong supporter of the military, especially the Navy. In fact, much of Disney’s construction in the first few decades was overseen by a former Navy Admiral. In 2021, another former Naval officer was honored by Disney for Armed Forces Appreciation Day.

Alex Stromski enlisted in the Navy at the age of 17. Although WWII was coming to an end, he felt a calling to serve his country. Stromski served honorably and earned a commission as a Naval Aviator. He attended flight school at NAS Pensacola where he was classmates with future astronaut Neil Armstrong. After earning his wings of gold, Stromski served in maritime patrol squadrons at bases around the world. Following the signing of the Korean War armistice, Stromski was part of the team responsible for keeping the peace in the newly designated demilitarized zone. He even worked on experimental naval aircraft like dirigibles.

In 1967, Stromski retired from the Navy as a Lieutenant Commander. Four years later, Walt Disney World in Florida opened its doors. Stromski became a regular annual passholder and often visited the resort with his family. His love for all things Disney grew to the point where he applied for a job in the parks. “I loved how Walt had great respect for the military,” Stronski said. “I realized that this was something I wanted to be a part of, so I applied and got a full-time job at Pinocchio’s Village Haus in 2013.”

Now working as a cast member in the happiest place on earth, Stromski brings his military experience with him to enhance guest experiences. “I love helping create the experiences that families will remember for years,” he said. “I especially enjoy meeting the military families and veterans who visit us.”

At the Magic Kingdom, the flags that line Main Street, U.S.A. only have 49 stars. Technically not American flags, they don’t have to be raised and lowered daily or illuminated at night. The only official American flag in the park flies proudly in the Town Square at the entrance. In observation of U.S. code, the flag is ceremoniously raised and lowered daily. In recognition of Armed Forces Appreciation Day, Stromski joined the flag detail and proudly carried the stars and stripes during the sunrise flag-raising ceremony. As the flag was raised, the 92-year-old Navy vet rendered a salute. “I’m honored and humbled,” Stromski said holding a shadowbox of the flag flown over the park the previous day in his honor. “This is something I never would have expected.”

Stromski is one of thousands of military veterans working for the Walt Disney Company. To encourage veteran hiring in other companies, the Disney Institute is holding the 2021 Veterans Institute Summit from September 13-14 at Walt Disney World. The complimentary event is geared towards helping companies who want to build or enhance their own hiring, training, and support of veterans and their spouses.