Instant Teams Liza Rodewald and Erica McMannes - We Are The Mighty 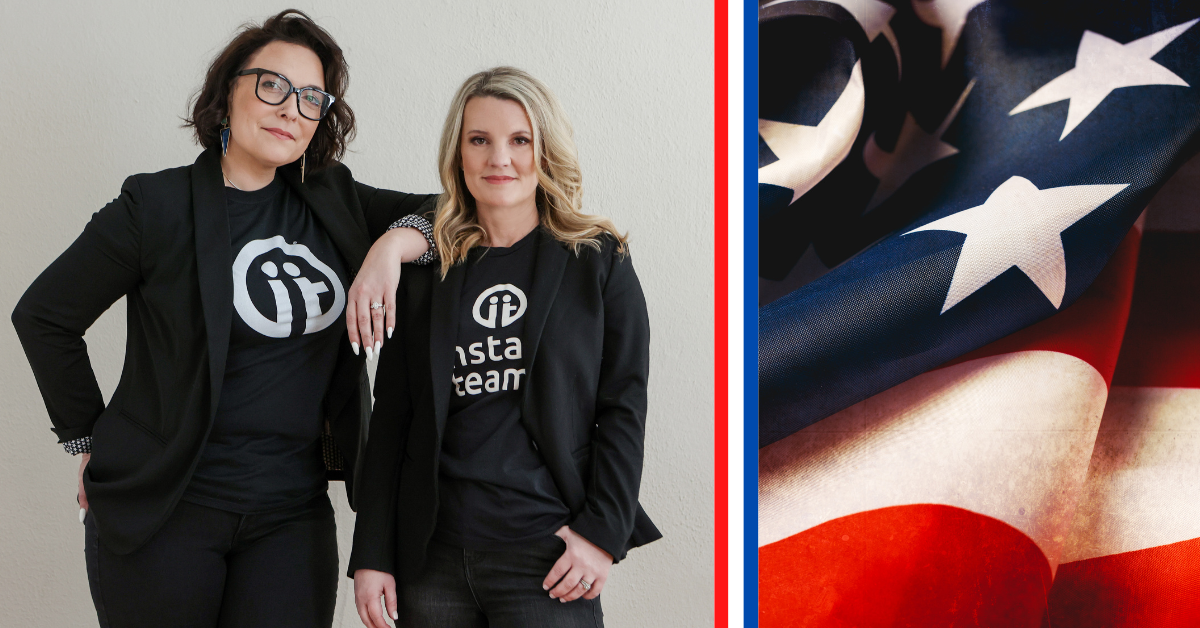 Photos courtesy of Rodewald and McMannes.

Instant Teams Chief Executive Officer Liza Rodewald and Chief Community & People’s Officer Erica McManes know a thing or two about the military. What they didn’t know is how their company would grow into an extraordinary force multiplier.

They call themselves a workforce on a mission.

“I’m actually a software engineer by trade and ran my own software company prior to starting instant teams. My company was 100% remote at the time and then I met my husband who was in the Army Reserves,” Rodewald explained. “Once we got married, he said, ‘Hey, I want to go back to active duty.’ I had no idea what I was getting into.”

As she moved around to new areas, the questions were always the same. “Spouses would always ask how I maintained a career. That was my first real introduction to military life,” Rodwald said. “Seeing that the spouse community really struggled because they moved often and weren’t able to maintain a career. But it was really enlightening for me. I started helping, mentoring and teaching people how to pitch remote work to their companies.”

Not long into her military spouse journey she met McMannes while they were both stationed in Virginia. “I got married in my junior year of college to an ROTC cadet. But then immediately our first duty station was overseas, right after 911. So that was like the height of deployments back to back,” McMannes shared. “They were gone for nine months, 12 months, 15 months and it was just over and over and over again. Cumulatively, we’ve done 12 moves in 20 years and in those first 10 years, I identified way more on that side of like just the pure struggle of maintaining a career as a military spouse.”

After they met, they found how deeply they connected strongly on a business level and as peers working remotely. A few years later, they decided to come together to create a platform for remote work to be a real possibility for all military spouses.

“The original mission has always stayed the same, which was to connect spouses into companies into remote opportunities,” McMannes said. “We kept saying ‘Let’s challenge the status quo’, let’s start to actually pay spouses in a way that is not voluntary but actual financial income and contribution.”

The original name for the company wasn’t Instant Teams – it was Mad Skills.

“I think that’s one of the things I’m most proud of, nobody has volunteered a minute of their time and not been paid for something from Instant Teams from the very beginning, even when Erica and I were just paying them out of our pocket because we weren’t making any money,” Rodewald said. “But the premise was so important to us from the beginning and I do think it helped lend itself in building the trust aspect. But when we pivoted from Mad Skills, we also decided to take the company and more of a technical direction by creating our own proprietary software and our platform.”

Though it has grown into a widely-recognized and respected company, both remember the years they didn’t pay themselves because they were so invested in scaling. During the first three years of that period – they lived six time zones apart, all while raising their first round of seed funding.

“It is an emotional roller coaster. Entrepreneurs have to be expecting that. The highs are really high, and the lows are really low and they come in like five minutes of each other. Right? You have to be ready and every time there’s something great happening that people see, there’s also something hard happening at the same time,” Rodewald shared.  “It may look at this point like we did all this in six years, it was so easy but it’s a hard road. And it takes a lot of mental work and focus for you to be able to know to ground yourself right to get through it.”

“Sometimes we just sit back and just have to take it in. I mean, we had an idea, it was the two of us, we now have a corporate team of 100 people that work with us to run this company on a daily basis. Now we have 500 account based employees out there across the globe. I mean, that is success, right? But to go from an idea of two people to now 500 people involved in the same thing is phenomenal,” she added.

As for advice they would give to other entrepreneurs looking to start a business, it was simple.

For Rodewald, she wants people to ignore the naysayers. “So many will tell you ‘Oh this isn’t going to be a big business’ and there’s a lot of dream crushers out there,” she added. “You have to just trust your gut and listen to feedback and input, because it’s important to absorb that. But then at the end of the day, you have to synthesize that and then know what the best decision is, and keep moving forward.”

McMannes echoed the sentiment with a little extra encouragement. “Just jump off the edge – you have to take that first step.”