MIGHTY 25: This extraordinary Air Force veteran couple is shattering employment barriers - We Are The Mighty 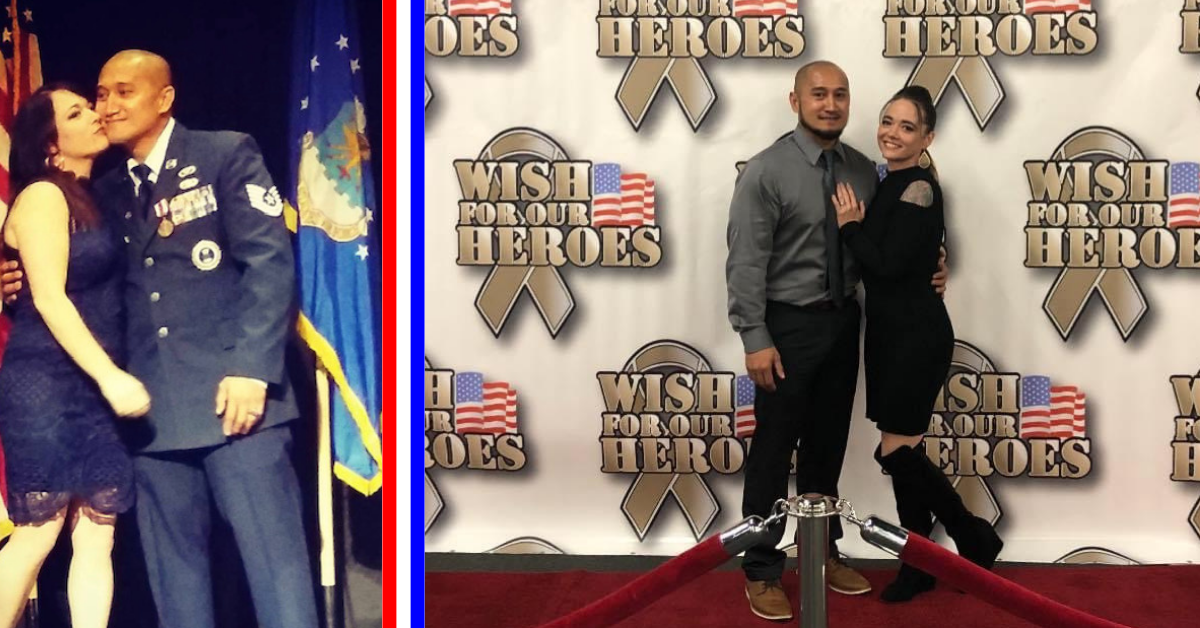 Photos courtesy of the Domingo family.

Retired TSgt. Rey Domingo and his wife, Sam, are used to fighting through challenges. In fact, they even used their difficult transition from the Air Force to stand in the gap for other veteran families.

“I was actually a military brat,” Sam shared. “My dad served in the Air Force and retired as a Command Chief out of Beale in California. But a majority of my life was spent overseas. I was fortunate enough to be stationed in places like Japan, Saudi Arabia, England and a lot of time in Germany. That’s actually where Rey and I met,” she smiled.

Originally a military police officer, Rey transitioned to recruiting. Both quickly fell in love after meeting at Ramstein and got married the day Sam turned 18. Five years ago, after 20 years of service, Rey made the decision to retire.

Both Rey and Sam admit they didn’t realize how unready they were.

“You have your retirement pay but it’s not going to cover everything and the savings that we had depleted extremely fast,” Rey shared. “Before I retired, everybody was telling me I wasn’t going to have any problems. Finding a job would be a piece of cake.”

It wasn’t. Thankfully, they were able to move on base in San Antonio while they navigated their new challenge, securing housing.

“I took every single opportunity and said yes to whoever wanted to interview me. I would travel like my full-time job was interviewing,” he laughed. Seven months after his retirement, he landed a position. But it came at a price.

His transition pushed their marriage to the breaking point and ruin their credit scores, which would take years to rebuild. “We were close to divorcing and sleeping in separate rooms,” Sam admitted.

Feeling like he’d failed, Rey said he began to retreat inward. Once an avid athlete, he stopped working out or doing anything beyond looking for a job. “I never really realized what military spouses went through til that moment in my life,” he said.

Rey said Sam’s encouragement pulled them through it all. “I’m an introvert and I shut down. I shut down for some reason. I felt like I was on an island by myself in some dark, dark space that nobody wants to get into, right? But she would put notes on my laptop, my shoes, the car, the fridge, the bathroom, my clothes and just everywhere,” he explained with a smile.

Those words of motivation and love changed everything, Rey added. Another factor in making it through was the realization that his entire family was transitioning, too — each going through their own grief or struggle with the shift from military life.

These lessons would be remembered for their next chapter.

Rey was at home as an Air Force recruiter once upon a time and it was something he encouraged Sam to pursue as well, feeling like she had the knack for the field of work.

Though she’d found at Family Endeavors working with the Texas Veterans Commission grant as a housing specialist preventing homelessness, Sam wanted more. “I felt like something was still missing because I’m sitting here watching Rey going on interview after interview and not getting employed,” she explained. “I’m like, ‘you know what? We need change for our community, so that’s exactly what I’m going to do.’ And thankfully, I got an opportunity with Strategic Staffing Solutions as a technical recruiter.”

It would lead her to working with USAA and eventually Rackspace, where she was a Chair for RackVET and led military programs and recruiting initiatives. Then it led me to Amazon Web Services as a Technical Recruiting Manager working on veteran hiring initiatives.

Rey maintained various contractor roles before receiving a call from Lockheed Martin. “It was an amazing opportunity. All the experience combined definitely helped me get to whatever I had to do with Lockheed because I was recruiting globally right at the same time,” he said.

A far cry from the struggling veteran family, they’d both found their groove in the civilian space while still working with their military family. But both felt called to do more for transitioning veteran families.

“When I was struggling, I started changing my mindset to where I’m not so disgruntled or not so depressed. I started to have the feel of where it’s just onto the next. If things don’t work out I have to assume it’s happening for some kind of reason,” Rey explained.

It’s a mindset both wanted to share with others.

In 2018, they co-founded the military community career meetup networking group, #LinkedInMilCity. Widely successful, Rey found himself wanting to create something even bigger. The idea was to create an opportunity for military affiliated career seekers and mentors to connect directly.

“The only way to ensure our community is empowered and has access is if we open our rolodex,” Sam said.

They developed K.E.Y (keep elevating yourself) under Team Domingo as a networking space. In less than a year, it already boasts 186 mentors from successful organizations like Navy Federal Credit Union, Wounded Warrior Project, Hilton, and Hiring Our Heroes, to name a few.

Things are busy in the Domingo household and changing, fast.

“I was doing a stretch assignment with Lockheed Martin with their military initiative when M&T Bank reached out to me,” he shared. You can now find him leading as a Vice President for Military Relations in Technical Recruiting.

In 2021, Sam was presented with the Hiring Our Heroes Military Spouse Volunteer Impact Award by First Lady Dr. Jill Biden. And while she loved her fulfilling role at Amazon, you’ll find her taking her extraordinary passion for the military to Twitter. There she has plans to help build their military platform from the ground up in Technical Recruiting.

“We’re each responsible for our own happiness and we need to recognize our faults and learn how to grow from those failures. Some of the best things are built from trial and error. Even falling on your face. Next time I’m going to build a bridge so I don’t fall into the water when I step off the ledge,” Sam said. “I think it’s incredibly important for our community to be inclusive of the spouse talent and veteran spouse talent.”

Rey and Sam have found their path and it’s not too far from their roots. As they continue to lift the military community through their inclusive programming, they have only one request: Pay it forward to the next veteran or veteran spouse and transition together.