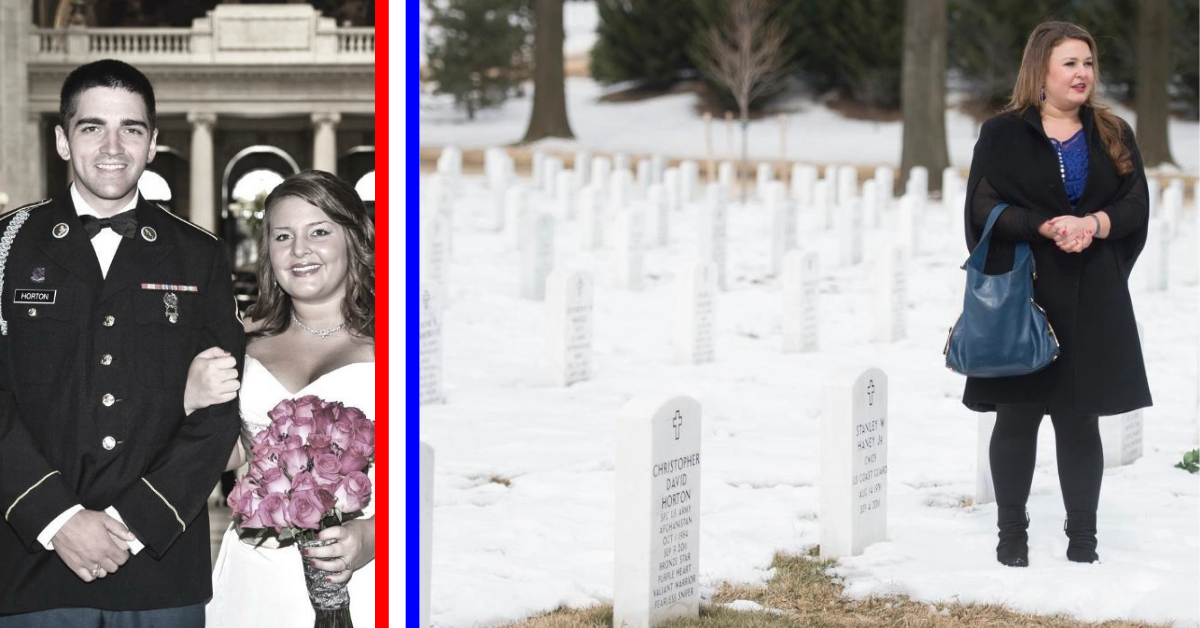 Jane Horton didn’t set out to be one of the most heard voices in the military advocacy world. Becoming a Gold Star widow in 2011 changed everything.

“I grew up in Cleveland, Ohio, as the youngest of three. I went off to Australia when I was 18 to volunteer over there and work with the aboriginals in the outback. And then I decided to go to a small, little school in New York City,” Horton shared.

It was there she met her soon-to-be husband, Christopher. Though friends at first, they began dating years later. Only a few months into their courtship, they were engaged and married.

Her husband was a sniper for the Oklahoma Army National Guard assigned to the 1st Battalion, 279 Infantry Regiment, 45th Infantry Brigade Combat Team when he was deployed to Afghanistan.

Horton was working on Capitol Hill at the time. The senator she worked for asked her every day how her husband was and how things were. “Two months into that, my husband was killed,” she said.

A knock on her door would change her life, forever.

The process after his death wasn’t smooth, either. “It kind of led me to come back to DC and help advocate for families of the fallen and help write legislation and policies to better the process for those who are left behind from the war,” Horton explained. “It led me to become an advocate for not only Gold Star families but for service members as well.”

Her new journey would lead her to working directly with the Chief of Staff for the Army. Three of them. Horton also advised the Secretary of Defense, working for the office for three years.

“I worked for the Afghan Ambassador to the United States and did some work at the Afghan Embassy here in America and then served in 2016 prior to that as a Special Assistant to General Dunford. I went over to Afghanistan with him in 2016,” Horton said.

While there she asked troops what they needed and for feedback on how to improve things. “And it kind of taught me how to listen and learn how to learn how to deliver that to a senior leader so I could create policy and help create change,” she said. “Service members weren’t afraid to talk to me because I had skin in the game.”

In 2018, she wrote a bill to create congressional fellowships for Gold Star Families. It passed.

Horton would go back to Afghanistan a total of six times. Her last trip in June 2021 was to the orphanages, just a few short months before the Taliban took over the country. Watching it was a nightmare come true, she said.

“I kind of knew for years. I dreaded the way the war was going because first of all, we have an all-volunteer force that’s fighting this for everyone else. And then I knew it would be my husband’s legacy,” Horton explained. “There were so many pieces to it. I still haven’t unpacked it all. I invested everything in that… I’ve invested my time in service members, Gold Star families, the Afghan people. All of it. We’re deeply hurting. Everyone was completely devastated by this.”

Horton quietly helped a female Afghan refugee out of Afghanistan and she’s now living with her. Watching the outcome through her eyes has been difficult, she said.

“We have this entire military community still trying to do what they can and it’s like everybody else just kind of forgot,” Horton added. “My heart is saying that the American people never really remembered. So, you know, we had the 1% fighting these wars. People didn’t take the time to pay attention and I think that’s where we got to where we are today.”

Despite the heartache of watching Afghanistan’s fall and the public’s reaction, there’s nowhere else she’d rather be. Though she couldn’t go into detail, Horton shared an upcoming project which will focus on educating the American people on the military through Hollywood. “I never thought I’d be here but it’s been the greatest honor of my life to serve and continue to serve this great nation,” she said.

It’s also important to her for the public to recognize the power of change they can have with their own voices. “You don’t have to have a platform to affect change. We are a country of the people by the people and for the people. And that’s why there are military fights everyday to protect our Constitution. I’d love to see more people engaged,” she added

Though she’d give anything to have her husband alive and well next to her, she’s grateful for the opportunities she’s had to serve. And there’s no end in sight.

“There’s not a minute that goes by that it’s not a part of everything I do. It’s been an honor that through my loss, I’ve been able to engage with the military community and get to know them and serve them,” Horton said. “It’s been the greatest honor of my life — taking care of those who fought alongside my husband and those who are fighting alongside me.”