MIGHTY 25: Marine veteran and MMA fighter Kelsey DeSantis will always be in the fight - We Are The Mighty

MIGHTY 25: Marine veteran and MMA fighter Kelsey DeSantis will always be in the fight 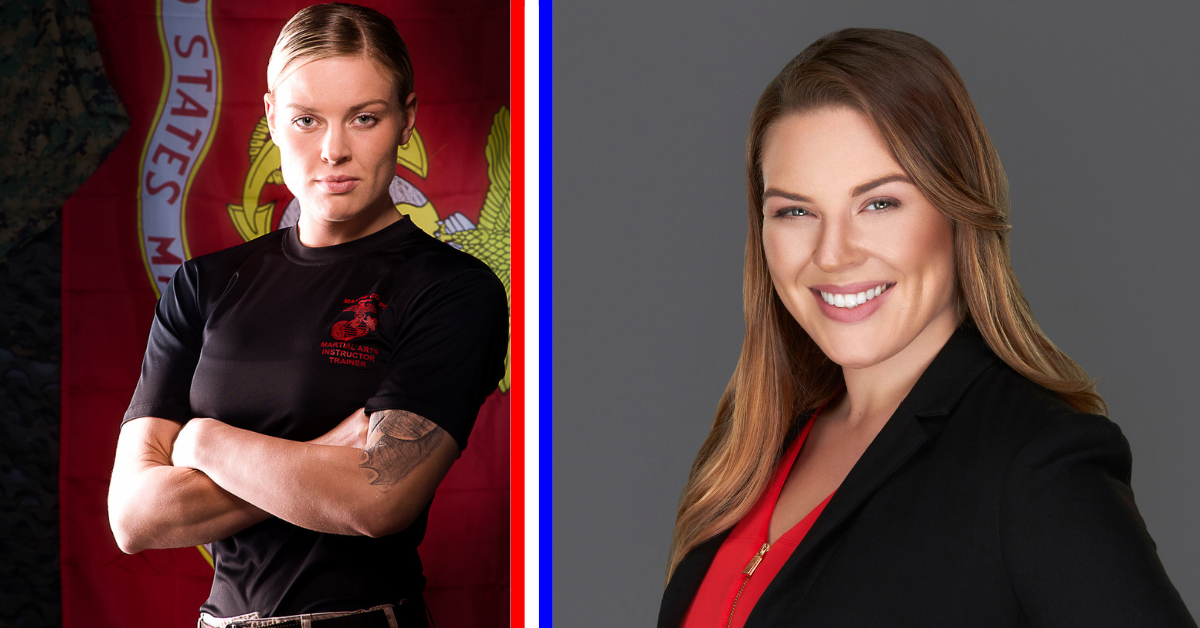 Kelsey DeSantis was 18 when the trajectory of her life changed forever. It was the day she became a Marine.

Before she began to improvise, adapt and overcome, life was challenging. “I grew up in Southern California and I grew up kind of hard. I like to say the way that some people can reference — the projects we grew up in were torn down,” she laughed. “It was always kind of like a dog eat dog world, you know? And it was kind of scary as a kid, to be honest. There were times where I was like, This doesn’t seem right. My mom always taught me to check my six.”

The lessons of a difficult childhood in a socio-economically depressed environment fostered a sense of grit DeSantis would learn to depend on. “I got into martial arts and martial arts truly saved my life,” she added.

DeSantis admitted she lost her first fight, horribly. In fact, she referred to it as “getting her face beat in.” But she got back up and into the ring. A lesson she’d remember. DeSantis got better and started winning fights.

Growing up, she was strongly influenced by an uncle who was a Marine in the Vietnam War. “He wasn’t my biological uncle but he took care of my brother and I when he didn’t have to,” Desantis shared. Just as she started gaining traction in the fighting world, an offer to go pro with MMA was put on the table.

She chose the Marine Corps instead.

“I wanted something more and I wanted to serve my country. And I knew that because … I won’t be unrealistic and say some great answers, besides the fact that number one, the most amazing people I’ve ever met were members who served our country,” she added. “I graduated as a Company Honor Graduate from my bootcamp class. I told my uncle that I was going to do that.”

From 2007 to 2012, she was attached to HMX-1, the Presidential Helicopter Squadron as a Military Police K-9 handler working for both President Bush and President Obama.

“We searched for explosives and did reconnaissance, overseas and stateside missions, which were really, really interesting and a lot of fun. I learned a lot. And then I went to the Martial Arts Center of Excellence,” Desantis said. “I got to fight a couple more times and the Marine Corps really opened my eyes up to jujitsu. Before I was just a stand up fighter and I wasn’t very well-rounded in different martial arts. The Marine Corps offered that to me in a really special and unique way.”

There, she was the first female Marine to teach at the highest level for the Marine Corps Martial Arts (MACE) program. She also invited and brought actor and singer Justin Timberlake to the Marine Corps Ball during that time. No big deal.

DeSantis was selected to be Ms. Veteran of America’s Iron Princess in 2014 and was even featured in a Dr. Pepper commercial “One of a Kind” in 2012. In 2019 she earned a Master of Public Relations from the University of Miami.

Over the years, DeSantis worked her way through various marketing or nonprofit opportunities before landing her current role with Grunt Style, leading its strategic partnerships.

When she looks back at how far she’s come, DeSantis admits it’s overwhelming at times. “I came from nothing. There were so many times that I contemplated suicide as a child, as a kid, you know what I mean? And these are things that I wouldn’t tell my VA counselor… because they would do a welfare check or something,” she said. “As a kid, if you would have told me or if I were able to see a replay of some of the things that have happened in my life since then, I would have said there’s no way.”

So, what would the public be surprised to know about this badass Marine, MMA fighter, mom and all around Mighty woman? DeSantis digs things like journaling in her Passion Planner and getting dirty. “I love to garden and walk around with my feet in the mud. There’s just something really special about being outside,” she added.

As for what DeSantis would want the military community to walk away with from her story? The message was simple.

“Never stop fighting because we’re all fighting for something.”