MIGHTY 25: Meet Jake Wood and Art delaCruz, the leadership behind Team Rubicon - We Are The Mighty 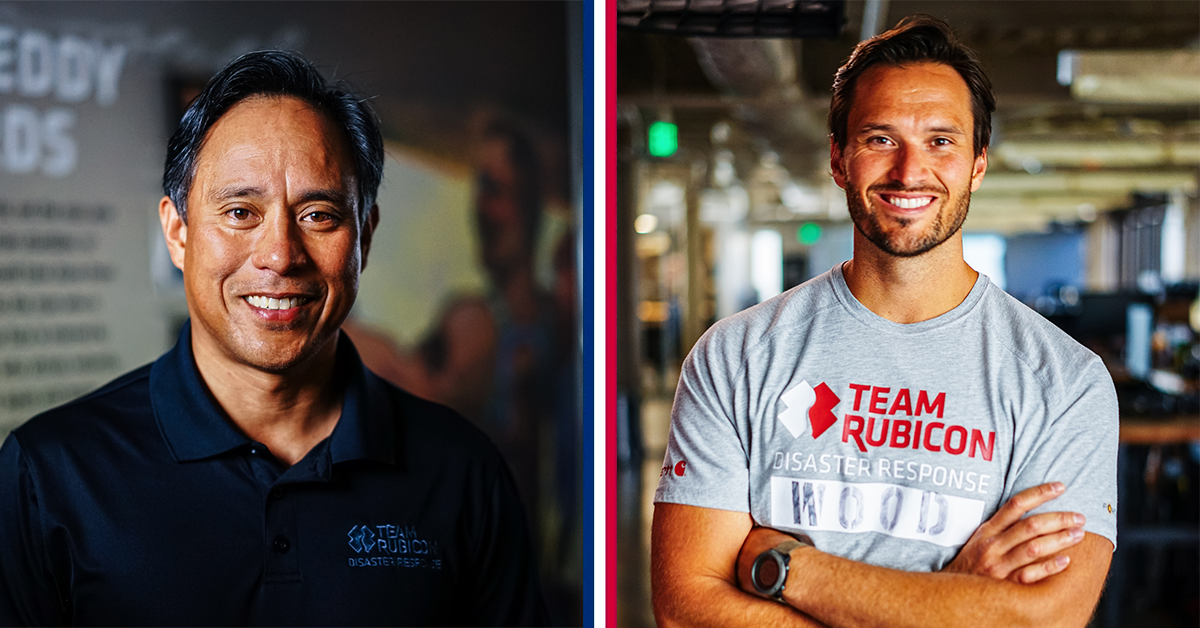 In 2010, after an earthquake ravaged Haiti, a small team of veterans responded in support. A decade later, Team Rubicon has become a leading force in disaster response – all over the world.

When Marine veteran Jake Wood co-founded Team Rubicon, he never imagined on its 10 year anniversary he would be responding to a global pandemic. However, he shared that they recognized the severity of COVID-19 long before it reached the United States and immediately began making plans. “We adapted very early to the crisis. That allowed us to move pretty quickly and we reorganized our entire organization which allowed us to pivot into the fight,” he explained.

Team Rubicon got their volunteers on the ground doing food bank operations, testing clinics and PPE distribution. But while they were busy supporting COVID-19 relief efforts, mother nature continued to wreak havoc with continuous natural disasters. “We were able to continue to answer the bell for these communities. We’re really proud of what we’ve been able to accomplish,” Wood said.

Wood had always wanted to be an entrepreneur, but wanted to do something that would add value to the world at the same time. Although Wood recognizes the impact Team Rubicon has had and the incredible growth they’ve achieved, it hasn’t come without failures or personal cost. His advice to others is to make sure they are fully committed to everything that comes with diving into a goal. “It’s the hardest thing I’ve ever done,” Jake said. “I’ve been so stressed at certain points in the last 10 years that I was grinding my teeth. I’ve broken three molars in half.”

Standing beside Wood to shoulder the responsibility of leading the global crisis response organization is its President and Chief Operating Officer Art delaCruz, a 22 year Navy veteran. When delaCruz took off his uniform and transitioned into civilian life with a role at a large corporation, something was missing. “I don’t think that’s uncommon. I think that’s where Team Rubicon and other organizations that serve veterans are uniquely positioned to have people plug in,” he explained.

The conversations around the leadership table these days revolve around what Team Rubicon will look like in 100 years, because they aren’t going anywhere. The team aims to be the best disaster response organization in the world. “We hope we can grow in the impact we can provide to the world and make Team Rubicon a household name. We also want the men and women who volunteer to serve in the military to view Team Rubicon as a part of their journey in life,” delaCruz said.

Team Rubicon helps veterans continue their service but also helps maintain that sense of community, something many lose when they take off the uniform. It also focuses on giving veterans back their sense of purpose and identity. After losing one of its initial team members, Marine veteran Clay Hunt in 2011, Team Rubicon honed in the need to be a vital resource for veterans. The organization developed The Clay Hunt Fellows Program to support personal growth and development for struggling veterans.

Team Rubicon has also become a leading voice on veteran issues. Wood himself has briefed multiple presidents on veteran transition and has also testified in front of Congress to champion improving mental health care services for returning veterans.

DelaCruz himself is passionate about those issues but also wants employers to think about hiring veterans and to recognize their unmatched value. “Military veterans are uniquely equipped and bring this incredible context, skill and capabilities that we generally, as a society, don’t ask them to use later on. People who might be hiring, don’t be afraid to take that bet on that veteran,” delaCruz said.

Military members develop skills and abilities at a young age. The responsibility they undertake is also unmatched, something hiring organizations need to recognize. “I flew airplanes in the Navy. I would walk up on a flight deck and stare at a 19 year old kid and salute him and say, ‘Is this jet ready to go?’ knowing that one lost tool, a hydraulic system not being serviced properly or a cap being left off a system – means losing a $60 million dollar jet. Then knowing that kid may leave the military and not be trusted to lock up a building at night…That’s just unbelievable,” delaCruz said.

Team Rubicon remains passionate about helping people recognize their ability to make a difference. “I think for us at Team Rubicon, everybody has some intrinsic value. There’s so much you can do,” delaCruz said.

Both Wood and delaCruz expressed feeling deeply honored to be named in the Mighty 25 for 2020. Both acknowledged that it’s only possible because of the dedicated work of their team and the incredible volunteers who make what Team Rubicon does for the world possible. It is their hope that their story will inspire others to add purpose to their lives. All it takes is a heart for service and a commitment to make a difference.