MIGHTY 25: Meet Paul Szoldra, a Marine veteran fighting for truth in journalism - We Are The Mighty 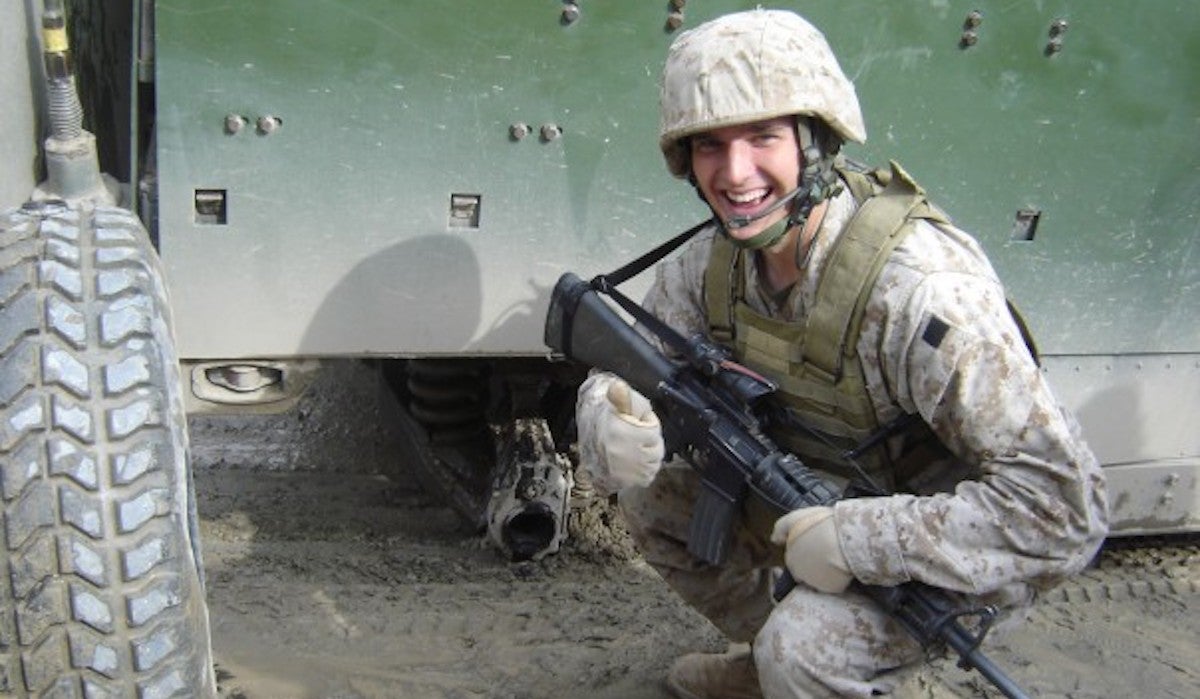 Paul Szoldra is deeply familiar with being challenged; he spent eight years as a Marine infantryman. This Mighty 25er is not only a combat veteran but also a trail-blazing journalist devoted to uncovering the truth at all costs.

Szoldra’s father was a helicopter mechanic for the Army during the Vietnam War, which left Szoldra always thinking about military service. “I would see his uniform in the closet growing up. It was one of those kid moments, seeing all those ribbons and medals and thinking it was super cool,” he explained. When America was attacked on 9/11, Szoldra was a senior in high school and watched it unfold in his history class. Like so many others, it was a pivotal moment that would change his life.

He arrived at boot camp on the one year anniversary of the terrorist attacks.

Although he joined the Marine Corps, he was almost an Airman. “It was the biggest cliché. The Air Force office was closed that day and I was knocking on the door and I heard this voice behind me – a Marine gunny,” Szoldra said with a laugh. That gunny brought him to the Marine Corps office and gave him the full impressive rundown of why he should join the Marines. “I’m just like, wow this is incredible stuff! That’s how it started, they got me good – they got me really good.”

His time as a Marine changed him in many ways. Szoldra shared that he lost friends in combat and more recently, to suicide. It’s an experience that had him questioning whether serving was worth it at times. “If I hadn’t joined the Marine Corps I wouldn’t have the pain of knowing and losing these people in the back of my mind…but, I also think of all the great things that came as well,” he explained. Despite the losses and challenges, he doesn’t regret serving and if anything, finds himself glad he joined the Marine Corps, seeing it as a stepping stone on the path for his life.

That stepping stone led him to journalism and an unwavering search for the truth. “I think the service aspect is an important one. Most people join the military because they are compelled to serve something higher than themselves… how I go about my day to day is that,” Szoldra said. Although he’s hung up his uniform, his days are still spent serving the military through journalism.

Although his serious and truthful journalism can be found at Task & Purpose, where he is the Editor in Chief, he also likes to have a little fun. He is the founder of The Duffel Blog, widely acclaimed military satire, or “fake news” site, enjoyed by the likes of General Mattis himself.

Despite the frequent negative commentary about the media, Szoldra remains positive about the work reporters do and feels it’s vital. He also encourages people to always have questions and to stay informed. “I can tell you that there are a lot of great journalists that are doing hard work all over the world. A lot of them are paid very little money to do so and some of them even are in war zones, risking their lives to get that information. Many times, it’s simply because they believe it’s so important to get the information out,” he explained.

Szoldra doesn’t hold back from finding the truth, even when it makes the military look bad. His pursuit of this led him to successfully sue the Department of Defense in early 2020. Szoldra discussed his concerns regarding things like mold in the barracks and increased rates of veteran suicide, saying that without journalism – change wouldn’t happen. “All of these things are huge issues and without the media to put a spotlight on them, none of these issues get fixed. Especially in the military. My experience has been to see an organization that is reactive rather than proactive,” he stated.

Szoldra shared that it sometimes takes the media to push issues in order to force the military’s hand in correcting wrongs or addressing issues that maybe weren’t prioritized. He’s made it his mission to tell the truth, at all costs. “Keeping people honest – that’s essentially what it boils down to,” he said with a laugh.

As for what Szoldra hopes readers take away from his story, his words were simple: “Find your purpose,” he said. “Fight for what’s right and seek the truth, even when it’s uncomfortable. Serve your community in whatever capacity. There are ways that you can serve that do not require you to carry a weapon.”