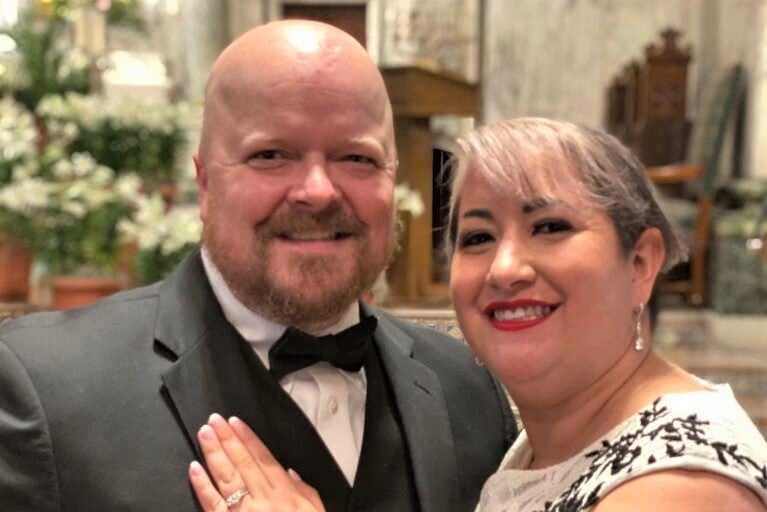 Retired Navy Lieutenant Curt Kline had been suffering from the after-effects of childhood and service-related trauma for years. A revolutionary new technology is curing his worst symptoms.

Enlisting in the Navy in 1994 was an easy decision for Kline, although he really wanted to join the Marine Corps. His mother wouldn’t sign for him unless he changed his branch of service, so the Navy was it. “I was 17 and was in my senior year. It was my fourth high school and I knew I didn’t have a lot of opportunities with college,” he shared. He wasn’t a military brat, either. “We were just poor…we moved around quite a bit.”

From that young teenager emerged a dedicated sailor. Kline was eventually commissioned as an officer not long after he was made Chief. He would go on to train potential SEALs out of the Great Lakes. Later on he was sent to Japan, again. It was there  he’d witness the terrible earthquake and tsunami of 2011. “You could see the flat ground moving like the ocean waves,” he said. Over 15,000 people died and he was close to retirement when he realized the event was causing deeper problems for him than he’d realized.

In 2017 he planned out how he was going to end his life. He had everything he needed and the place was decided. At the last moment, he decided to go to the hospital in a last ditch effort to get help. They saved his life.

His trauma went back further than his time in the Navy, though. When he was five years old, his mother left his father when she caught him giving marijuana to Kline. Although he’d stay away from alcohol and drugs, he soon realized he’d become anchored to something else. “My drug of choice was the Navy. It was a distraction from all the things I grew up struggling to understand and process,” he explained.

When Kline retired after 25 years of service, the pandemic hit. He was without his anchor and isolated, a combination which led to a terrible chain of events. The decline led to a deterioration in his marriage to Catalina, a Marine Corps veteran. Finally, after struggling with depression, paranoia and suicidal thoughts for over eight months, he knew he needed help.

Kline went through TRICARE and the VA for support, but it seemed as though everyone was too busy or didn’t know what to do. “I did find help with Head Strong. Their mission is to provide therapy without any barriers to treatment,” he explained. “That helped tremendously, giving me the foothold to take the next step.”

His path ahead wasn’t anything he could have imagined. Kline stumbled upon a social media post discussing a new FDA trial at Ohio State University with Transcranial Magnetic Stimulation (TMS) on veterans. Named Veterans Neuromodulation Operation Wellness (NOW), it was a study that was sponsored and funded by Ohio’s state senator in Bill 166. Senator Frank Hoagland is a former Navy SEAL himself and remains dedicated to serving veterans.

As soon as the trail was open to candidates, Kline made a phone call to see if he could get on the trial. Only a week later, he traveled to Ohio to begin the program. “Basically, it takes your brain waves and starts to even them out with magnetic pulses,” he explained.

The human brain is 85 percent water, allowing the TMS pulses to have an almost recharging effect on the mitochondria. This is an area of the brain that creates the energy for cells, around 90 percent of what our body’s cells need to survive. What many outside of the scientific community may not realize is that trauma itself causes our mitochondria not to function properly. Studies have found reduced mitochondria in combat veterans and those suffering from severe PTSD. By recharging the mitochondria, the TMS technology has the potential to eradicate the symptoms of anxiety and depression.

The therapy begins by recording the baseline of brain activity for the patient using electroencephalogram (EEG) readings. This shows the doctor what parts of your brain are operating well and which ones aren’t. From there the CloudTMS™ machine coordinates an individualized plan for magnetic pulses into the brain.

“After about three weeks of treatment I noticed that I started to sleep more than a couple of hours a time…for me that was a huge difference. One of the things that medication never did for me with my depression was help my motivation,” Kline said. He described his depression as a fog that covered him, making it hard to move. The treatment lifted that fog and reduced the consistent feelings of anxiety he’d been battling. His wife soon joined the program as well and had similar success.

Although Kline is continuing completing his 30 sessions of treatment, the program was paused. This led to confusion on his part because the study was fully funded for two years but appeared to have been stalled due to internal issues. When Kline received the phone call on March 5, 2021 that the study had been stopped indefinitely, it didn’t sit right.

Through his own research, Kline believes it was stopped because something this impactful has the potential to shift veteran care away from pharmaceuticals. He implores the VA and veteran allies to continue to push for alternative therapies and move away from the drugs that are making many veterans unrecognizable or causing addiction.

Jacob Burns was a struggling Air Force veteran when he applied for the program after it had paused. Shortly after being denied entry, he drove his truck into a tree and killed himself. He was only 35 years old. Although Kline isn’t blaming the pause on Burns’ suicide exactly, he wonders if getting help rather than being turned away could have changed things.

Kline is now back home in Virginia and working for the first time since retiring from the Navy. He’s continuing to progress every day and is endlessly grateful to the Veterans NOW program and supporters he met along the way. It’s his hope that through continued media coverage of the veteran TMS study, the already funded veterans program will restart and continue healing veterans.

As we continue to lose more and more veterans to suicide each day, the time to act on viable solutions is now.