From Vietnam to Editor-in-Chief of Parade Magazine, Marine Walter Anderson shares his story - We Are The Mighty

From Vietnam to Editor-in-Chief of Parade Magazine, Marine Walter Anderson shares his story 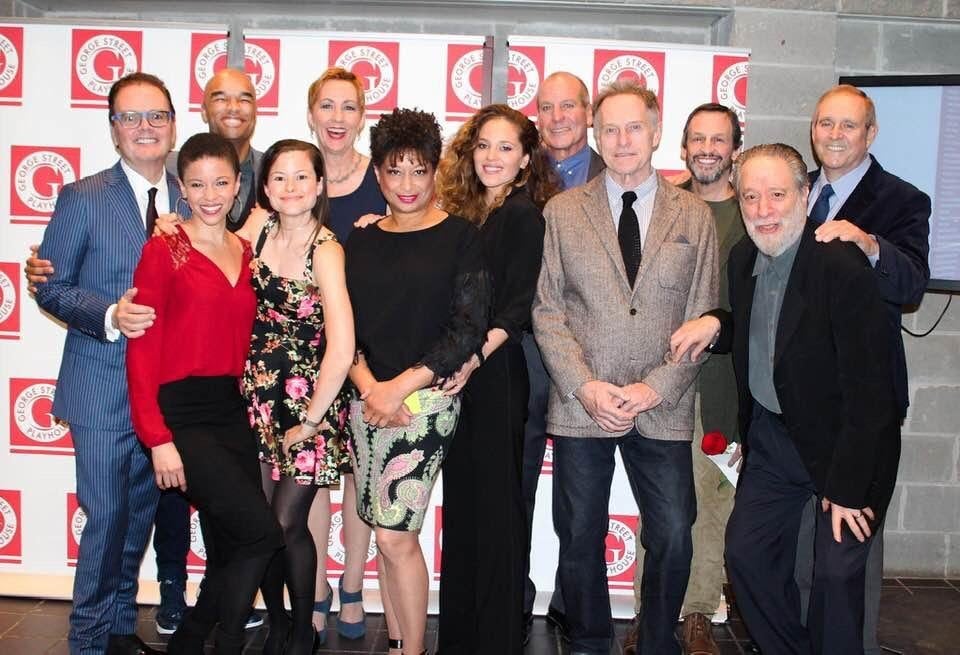 Former Chairman, CEO and Editor-In-Chief of Parade Magazine, author of five books and three plays, Walter Anderson served in 1965 as a Marine sergeant in Vietnam. What follows is a glimpse into his time in the Corps and how his training and experiences in the Marines led to his life’s successes.

In this continuing series which will feature former and retired Marines and their contributions to entertainment, We Are The Mighty asks Anderson to discuss how his past led to the present and the learning points along the way. And, of course, what he is most proud of.

Walter Anderson’s impact and influence has been felt in magazine and newspaper media as well as through his books: Meant To Be, The Confidence Course, Courage Is A Three-Letter Word, The Greatest Risk of All and Read with Me. He has written three plays: Talkin’ Stuff, a one-man show he performed at Ford’s Theatre in Washington, Almost Home, which was produced Off-Broadway in New York City, and The Trial of Donna Caine, which opened at the George Street Playhouse (NJ).The plays have their roots in the Corps and in Anderson’s own experience as a Marine.

Anderson grew up in a tenement in Mount Vernon, New York, at the edge of the Bronx. His father was a violent alcoholic, his brother a boxer and his sister a street-gang leader. But a teacher who lived across the street believed in him. With her encouragement, he was accepted into a parochial school but he was later expelled. Undaunted, the teacher had Walter placed on scholarship in a private school in which he did remarkably well.

Nevertheless, Anderson quit public high school two years later and joined the Corps at 16. He was not allowed to enter boot camp at Parris Island until a few days after his 17th birthday. His reasons for joining were, “I needed to feel pride in something. Whenever someone mentioned the Marines, it was with respect. I wanted to feel that respect. What I didn’t anticipate was the Marine Corps’ focus on education, which would become so important to me. I was moldable for sure and I had an ability to learn rapidly, he recalled. “Graduating boot camp was my defining moment, though. I was called a US Marine.”

After he completed infantry training at Camp Lejeune, he was ordered to the 8th Engineer Battalion where he was assigned to be a combat engineer. But it wasn’t long before he was chosen to be a student at the electronics school at the San Diego Recruit Depot. Despite not having the requisite math and science education, he graduated Number 7 out of 24 and, since he was in the top third, he was promoted to lance corporal. Anderson said, “It was a profound moment. For the first time in my adult life someone said, ‘I believe in you.’ A Marine would understand the power of that experience.” In the Corps he learned, “Leadership is the ability to inspire in others an eager willingness to contribute. I learned how to take responsibility for my behavior and my life. All that matters is performance in the Marine Corps. You are judged by what you do.”

While in Vietnam, “One night in October 1965, we were attacked by the North Vietnamese Army at Marble Mountain in East Da Nang, a helicopter strip where MAG-26 was located. The Viet Cong seemed to know everything about our camp. We were attacked with satchel charges in the copters at first. Thankfully, we were able to repel the NVA and VC. Soon after the attack I saw a young Vietnamese teen lying dead. Damn, I thought. Then a Marine was carried by me on a stretcher with half of his face blown off and in that moment all I cared about was the Marine.” He continues, “The next morning I found a typewriter in the rubble and, still agitated, I wrote a short piece that I called Just What Is Vietnam. I sent it home and forgot about it. But it appeared on the front page of a local newspaper and I got mail from scores of people for several weeks.”

Anderson worked his way into the media and print business post his time in the Corps. He sought a job as a reporter once he left active duty. He was given an opportunity by an editor who was a World War II veteran. He worked at the paper full-time and attended college full-time. He shared, “I told the editor who hired me that I would work for bus fare, if he would just let me prove myself. I was named night city editor within a year and six years later, after a variety of assignments, I became editor and general manager of the newspaper on which I began my career.”

Anderson believes the most important messaging he learned in the Corps is how to communicate with clarity, authority and substance. It’s clear he also profoundly values discipline and integrity, which he said is to be honest with yourself as well as with others. He said he learned in the Corps how and when to question authority: “The Marines taught me that honest and constructive feedback on leadership performance is invaluable. If people overheard Marines carry on after an operation or exercise, they would think we failed the challenge. But in reality, we encourage criticism so that we can improve.”

One of Walter Anderson’s most significant memories on leadership while in Vietnam is, “We were on a small run at the base. Afterwards we were concocting a lunch of c-rations poured into helmets, laughing, cursing loudly exaggerating. You’d have thought it was Thanksgiving. But not 50 yards away were a group of soldiers. They were sitting there quietly, so quietly, and they were either eating alone or in small groups. I went over to see if there was a problem. Perhaps they had suffered a tragedy, I thought. The NCO in charge told me all was fine. The soldiers themselves were no different from us, just young guys trying to get through the day. But that unit deserved more inspired leadership, somebody giving those soldiers at least something to laugh about. In boot camp we heard the cliché “every day a holiday, every meal a feast.” Truth be told that line is never more important than when reality is anything but joyous. Our unit was closely-knit because of good leadership, from the C.O. to team leaders.” Anderson offered his insights on obstacles, “The Marines call their obstacle course The Confidence Course because its purpose isn’t to stop you but rather to teach you that you gain confidence by overcoming obstacles.”

We asked Anderson about his plays: “Almost Home is based on the stormy relationship I had with my father. Joe Lisi, a fine actor who is also a fellow Marine, played the character based on my father. When the main character, Johnny Barnett, comes home from Vietnam, can Johnny and his father resolve the tension between them? Will they finally get to know each other? The Trial of Donna Caine has nine characters. It is about the trial of a young female drill instructor. It was inspired by the Ribbon Creek incident of 1956.

The Trial of Donna Caine was financially successful, which is not always the case when a play is produced. It received mainly encouraging reviews. Word-of-mouth from the audiences inspired more people to attend. The play seemed to hold people’s attention, which always makes a difference. Writing plays is both more rewarding and more challenging for me than any other type of writing.” He persuaded a sergeant major, who himself had been a Drill Instructor, to come aboard to inspire the actors for The Trial of Donna Caine. He recalls, “It was a lot of fun to see their faces when the sergeant major went into his Drill Instructor routine. Believe me, he had the full and undivided attention of the cast.”

He recognizes, “We need more Marines in entertainment.” He believes Marines can always improve their interaction and communications within the media and entertainment space. Senior officers might want to take a cue from senior enlisted on being more personable and less defensive when they deal with the press. He shared, “Especially effective and successful Commandants like General Chuck Krulak and General Jim Jones, though markedly different men, both had an excellent ability to deal with the media.” He further elaborated, “I suspect in a hundred years, long after I’m gone, the Marine Corps will still be thriving. And that will be assured if my fellow Marines hone their ability to speak with the press. Again, witness Krulak and Jones.” Walter shared his wisdom on how to get Marine stories told in Hollywood: “First, you need a really good and gripping story. And if you can get a notable actor interested in the project you may well get your project produced.”

Anderson has decades of experience in dealing with teams and personalities across the full spectrum. He made Parade magazine more successful than it had been before and brought in key leaders and world-class talent to build the brand. He has much in the way of professional advice to offer:

“There are seven choices we make every day:

“Appearance: You paint the portrait others see. You select the clothes you wear, how clean and healthy-looking you choose to be.”

“Language: No one on earth is more expert than you at finishing your sentences. You pick your words, finish your sentences and express yourself in gestures.”

“Information: Which messages do you choose to receive? Most of us live in a blizzard of words, sounds and pictures. What do you allow in?

“Places: How do the places where you spend most of your time affect the quality of your life? Do they help you to feel fulfilled? While the world outside strives mightily to influence us, it is we ourselves who choose who, what, and why. And we also choose when.”

“Time: You choose when to take action.”

He shared his support for fellow veterans: “Whenever I had an opportunity to hire a veteran I have. They are proven and they are appreciative of where they are in their lives. I want people with the most talent, of course, and that includes veterans. I admit, if he or she is a vet, he or she has a leg up with me.”

Finally, he gives insight on what he said was his biggest challenge, dealing with anger: “It took quite awhile but I learned that anger is merely energy. We choose what we’ll do with our anger. We can displace it, that is to hurt someone or break something, or we can sublimate it, that is to do something creative, perhaps help someone or maybe fix a chair or write a poem. I believe all creative acts are inspired by anger, burning frustration about something. Again, it’s a choice: we can displace our anger, do something destructive, or we can sublimate it, do something constructive.”