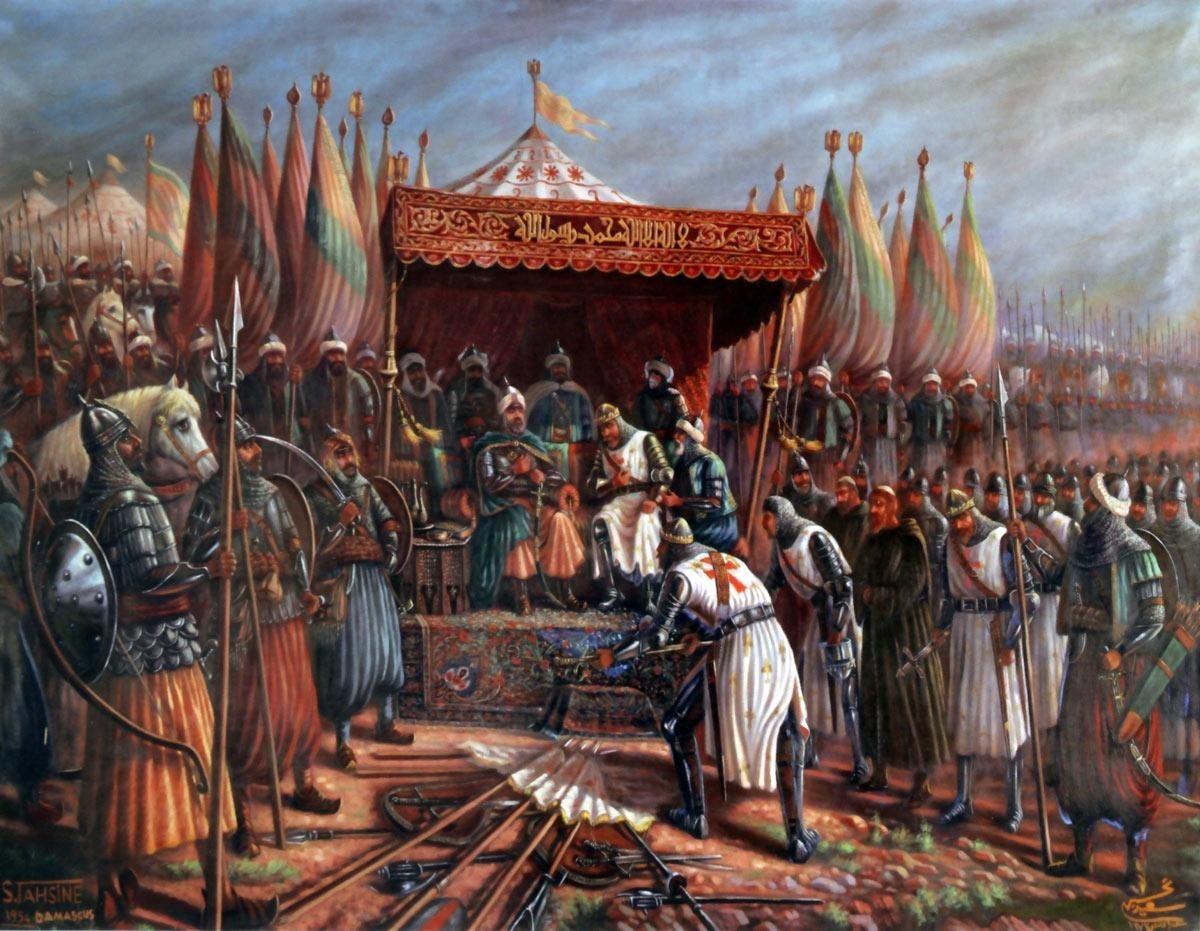 Modern interpretation of Saladin accepting the surrender of Guy of Lusignan (Wikimedia Commons).

Leading a massive military force must be a huge ego booster for its commander. Wielding that much military power in one place has to make anyone feel confident of victory. Still, it’s always important to check yourself before you wreck yourself because even history’s greatest leaders can fall victim to hubris. In Pulp Fiction, Marcellus Wallace was right when he said “Pride only hurts you, it never helps.” It’s amazing how generally wise and experienced leaders can fail because their own overconfidence undermines that wisdom and experience. Here are four cautionary battle tales along those lines.

This battle is not just monumental for its outcome, but also for who was involved, where it took place and how the battle was won. It happened on the Yangtze River in 208 AD during China’s Three Kingdoms period. It was also one of the largest naval battles in history, if not the largest. It pit legendary Chinese warlord Cao Cao, who wanted to unify China under his rule, against an alliance of two other greats from Chinese history, Liu Bei and Sun Quan.

The two sides first met at Xiakou, but Cao Cao’s rush to meet his enemies pushed his army too hard and they were forced to retreat to Wulin. There, the two sides met on the water, with Cao Cao’s 250,000 men (who were largely not sailors) aboard a massive fleet of chained-together ships. The allies opposite had a force of 50,000 marines.

When the fighting started, the allies had replaced the men and material aboard a number of boats with scarecrows, kindling, and fatty oil and sailed right at Cao Cao’s flotilla. His men fired fire arrows at the ships, which set them on fire. When they approached Cao Cao’s ships, they exploded, setting fire to his ships. Half his men were lost and the warlord was forced to retreat.

Greed and ego claimed the loser at Carrhae. Marcus Licinius Crassus believed that he could overwhelm the Parthians at Carrhae at the head of 43,000 legionnaires. He was looking for an easy win that would give him the same military glory enjoyed by the other members of his triumvirate, Julius Caesar and Pompey the Great, while expanding the Roman treasury. Instead, it was one of the worst losses of all time.

The Roman legions were literally showered with thousands of arrows from mobile Parthian horse archers. The deadly rain sliced through the Roman lines and when they moved to retreat, they were met by Parthian cataphracts, heavy horse cavalry with long spears. Crassus and the Roman leadership met with the Parthians to discuss surrender terms, but were killed instead. 20,000 legionnaires were killed in the fighting and 10,000 more were taken prisoner. The Parthian losses were so minimal, they weren’t recorded.

In 1315, the Habsburgs were divided among two camps for who would claim the title of Holy Roman Emperor. To assert its military dominance over three Swiss cantons who had recently sacked a monastery to assert their own autonomy, Habsburg Duke Leopold I led 9,000 of the family’s best troops to put them back in their place and capture an easy route to Italy. It didn’t work out the way he planned.

Instead of crushing the Swiss Confederates, who only mustered 1,500 poorly armed peasants, they marched through a bottleneck at Morgarten Pass, which put the army between a mountain and a swamp. As the tightly-packed Habsburgs marched through, the Swiss dropped rocks and arrows at them, devastating the elite knights. When they moved to retreat, they ran into the force of peasants who slaughtered 1,500 of them and scattered the rest to the winds.

In 1185, crusader Raynald of Châtillon raided a Muslim caravan, violating the uneasy truce between the Crusader States and the Islamic leader Saladin. In response, Saladin assembled the largest force he ever led and laid siege to the city of Tiberias. To relieve the siege, Raynald marched his own massive Crusader army away from its fortified camp near the springs of Sepphoris to meet Saladin – which is exactly what Saladin wanted.

The Crusaders marched in the heat of the desert by day without enough water to sustain them on their way. They decided to divert south to the springs of Kafr Hattin. There, they found Saladin’s Army standing between them and the water. Parched with thirst the Crusaders settled down for the night, but were harassed by smoke from fires set by Saladin’s forces, exacerbating their thirst.

When the fighting started, the demoralized Crusaders were decimated by arrows. They formed their army but were swiftly routed. They tried to break for Lake Tiberias but were blocked on that road too. With nowhere to move, no possibility of retreat and much of their infantry deserted, the surrounded Christians were defeated. The 20,000-strong army was annihilated, its nobles were taken prisoner, and Raynald was executed for breaking the truce.