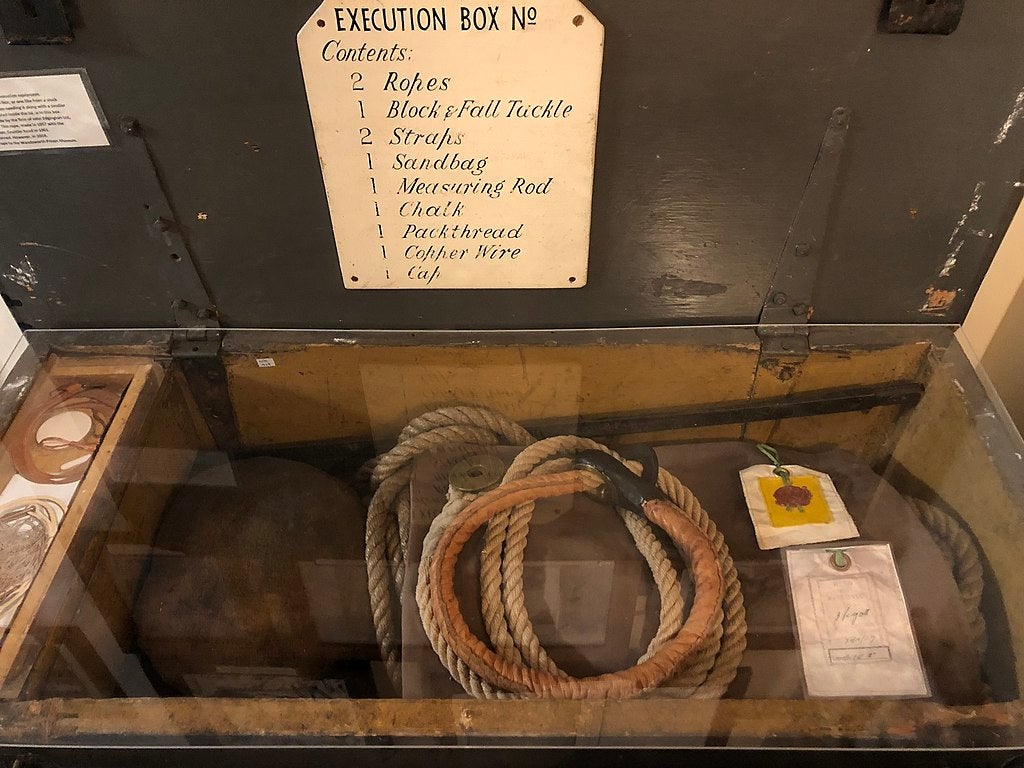 Albert Pierrepoint knew from a young age that he wanted to follow in his father’s footsteps of sorts. His father Henry was a hard-drinking day laborer who sometimes acted as an official executioner. Albert’s uncle Thomas was also an official executioner, but it was young Albert who would grow up in a family of executioners and later put an end to the lives of some of Britain’s – and Germany’s – most notorious criminals.

Henry Pierrepont died in 1922, and 10 years later his young son took on the job of assistant executioner. After training in London for some months, he was accepted. His first execution came in December 1932, when his uncle Tom took him to the Irish Free State to execute a farmer convicted of murdering his brother.

When World War II started, Pierrepont was 34 years old and a leading executioner. He was called on to execute Nazi spies, saboteurs and informants, as well as American service members who were convicted of capital crimes by the British justice system. He didn’t tell anyone about his work, but everyone knew he was the British Government’s wartime hangman.

In 1945, his work became more important than ever, even earning his name a place in the international press. He was flown to the former site of the Bergen-Belsen concentration camp in that same year after 11 German officials at the camp were sentenced to death. When he arrived, he found a flock of news reporters and photographers anxious to get a word with him.

It turned out that Field Marshal Sir Bernard Montgomery had given his name to the media. They were waiting for him at the airport when he landed. Pierrepoint was also given the rank of Lt. Col. for his military-related duties that year because he had his work cut out for him.

After carrying out the sentences involved with the Belsen Trials, Lt. Col. Pierrepoint was carted around postwar Germany and Austria to carry out more sentences as war crimes trials continued around the dismantled former Third Reich. In a time frame of less than a year, between December 1948 and October 1949, Pierrepoint executed more than 225 people, sometimes between two to ten at a time.

Pierrepoint’s work wasn’t limited to former Nazis and war criminals, however. He also was tasked with executing British citizens who were either Nazi sympathizers or actively assisted the German regime during World War II. He executed British soldiers and citizens for wartime treason and even the American-born William Joyce, who became notorious as a Nazi radio propaganda personality during the war known as Lord Haw-Haw.

After the war, Pierrepoint bought a stake in a local pub so he wouldn’t have to take time off of his regular day job to perform executions for Her Majesty’s government. By the 1950s, he was Britain’s most experienced hangman and was called on to perform the executions of the country’s most notorious postwar criminals.

He also hanged a number of criminals whose guilt was in doubt, giving rise to the question of whether capital punishment was a real deterrent or a fair sentence in Britain. That didn’t matter to Pierrepoint, he was just doing his job.

Pierrepoint retired in 1956 after getting stiffed by a local sheriff for his usual fee when a prisoner was granted a reprieve. Pierrepoint had traveled for miles in the snow and prepared everything necessary for the execution, only to have the prisoner get a stay in the final moments. Pierrepoint had hired extra staff to watch his bar and when the Sheriff declined to pay the fee, he retired immediately.

He later wrote that he doubted execution was a real deterrent to crime. Writing in his biography, he said of execution:

“.. is said to be a deterrent. I cannot agree. There have been murders since the beginning of time, and we shall go on looking for deterrents until the end of time. If death were a deterrent, I might be expected to know. It is I who have faced them last, young lads and girls, working men, grandmothers. I have been amazed to see the courage with which they take that walk into the unknown. It did not deter them then, and it had not deterred them when they committed what they were convicted for. All the men and women whom I have faced at that final moment convince me that in what I have done I have not prevented a single murder.”