MIGHTY 25: Army veterans Juston Graber and Andrew Hernandez use humor to help - We Are The Mighty 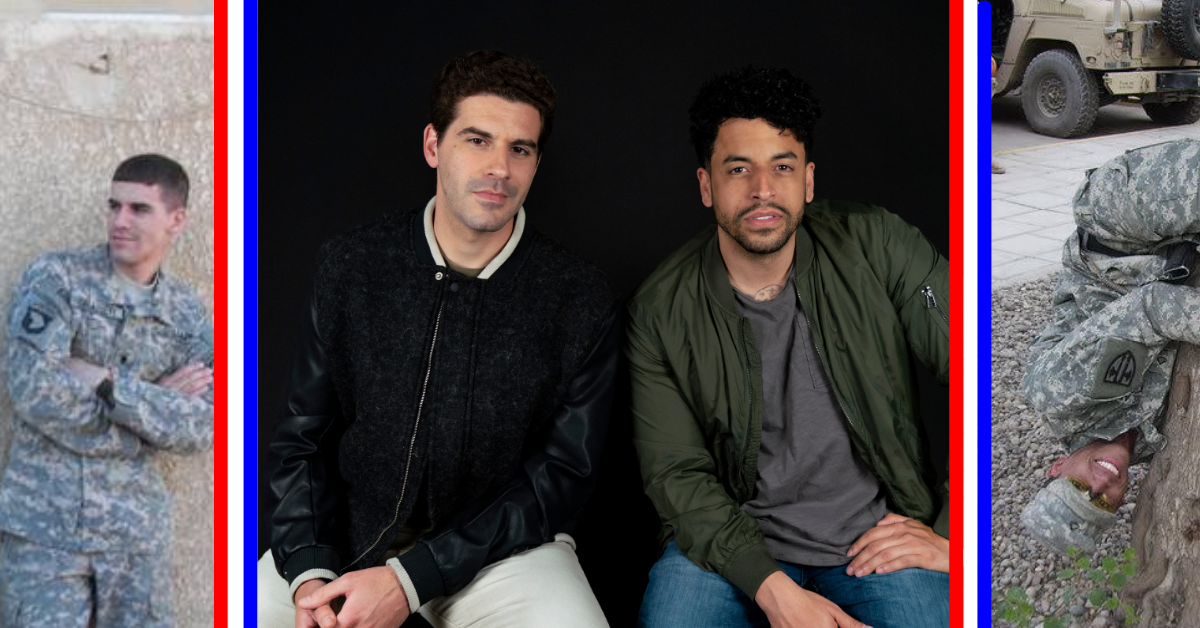 Veteran soldiers Juston Graber and Andrew Hernandez (known professionally as Drew Anthony) are well-known for their comedic acting work on A Combat Veteran. But it’s their commitment to sharing true stories of veterans regardless of consequences that makes them stand out.

“I enlisted in 2004 and went to Fort Leonard Wood. I was enlisted in the Reserves at first. I had a pretty interesting time in the military,” Hernandez shared with a smile.

After a few years as a reserve soldier, Hernandez made the decision to go on active duty. By 2006, much to his surprise, he was deployed to Iraq. The combat tour led to alcoholism, he admitted. It was a struggle he brought with him to Germany and then back to the states.

While stationed in New York, he volunteered to deploy to Afghanistan. While there, Hernandez worked with coalition forces from France, Canada and Italy. During the same timeframe, Graber was also deployed overseas for the Army.

“I joined in 2003 after 9/11. Our ‘why’s’ are the same,” Graber said. Not only did both want to fight for America and avenge those lost in the terrorist attacks but they were looking to build better lives, too.

“I chose infantry because my recruiter was like, ‘Listen, there’s only two jobs in the military, infantry or support. You want to be the balls or the jockstrap?’ I told him to sign me up for the balls,” Graber laughed. “I grew up kind of poor. I knew I wasn’t going to be able to afford college or anything like that. I didn’t want to stay in Buffalo. I probably would’ve ended up like some of my unfortunate friends.”

His path as a soldier wasn’t easy, either. Graber was frank in sharing his struggles with PTSD from combat as well as mistakes made while serving — one which almost got him kicked out of the Army.

After serving eight years in the Army, Graber transitioned out. He made the decision to pursue acting and film making, attending school to hone his craft. “I like making people laugh. When I started doing theater at school, it really resonated with me because a lot of the times, like a grown up as a man, you have to be tough, you have to be strong. And that’s multiplied by 100 in the military,” he explained.

Hernandez found himself struggling with military life, as well. In 2011, he transitioned out of service and became a defense contractor. “I went back to Baghdad, to the embassy, where I made a lot of money and had a great time,” he shared. It wasn’t before long that Hernandez became disillusioned with his contract work. Making people laugh was always a part of who he was, too. On a whim in 2015, he made a comedic video for his friends on the 10 things they all had in common and uploaded it before bed.

He returned from a morning mission to discover it had gone viral, garnering over a million views. So, he kept going and turned “A Combat Veteran” into a heavily followed brand. Throughout the years he amassed hundreds of millions of views on his videos.

In 2019 Hernandez found himself in Hollywood where Graber recognized him on the street, an extraordinary happenstance in itself given the size of the city.

During those weeks filming in the desert, the men began to share filmmaking ideas and come up with sketches. The ideas led to projects which went on to win a multitude of awards and grow their fanbase. Even with their success, both admitted to struggling to get acting offers or callbacks for auditions.

Despite the challenges, there’s nowhere else they’d rather be.

“The brand has always stayed within the guidelines, but we play around with dark humor,” Hernandez said. Though initially fine and approved through the social media giant, it’s been a fight to share videos over the past year.

“In December 2020, they stopped paying Drew without any explanation whatsoever and it took him until May to get it resolved. And then he came to me and said, ‘I think I want to do an app. I think we should do our own app’. The next day it began,” Graber explained.

An independent streaming app would allow Hernandez and Graber to be in control of their content. Though they’ll continue to use traditional social media channels, they hope to build the app as the main access point for their films.

Hernandez said, “For me, I get to wake up and do what I love. And that’s a privilege for me, that’s an advantage not a lot of people have.” He was open in sharing his struggles with depression and suicide ideation. “I think right now I’m at the moment where I got to be honest with how I feel, how I see things. And not worry about the expectations that people have of me.”

Both are committed to sharing veterans stories and helping their voices be heard. Despite the challenges, they won’t stop. “There’s that saying that nothing worth it is easy,” Graber said. “Yeah the road is going to be hard but that’s okay, we’re not quitting.”