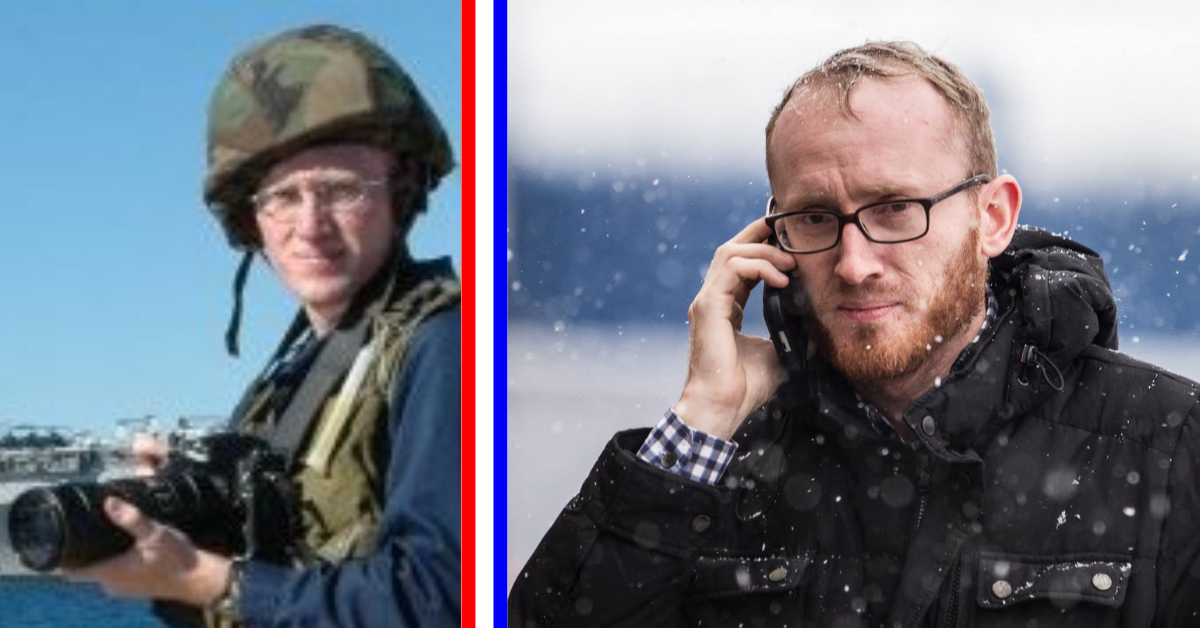 Zack Baddorf is a proud Navy veteran committed to extraordinary journalism. His lifetime of service is a lesson in courage, values and believing in the good.

Reporting was always a goal for Baddorf in his early years. He spent time working on his high school’s newspaper, yearbook and even volunteered at the local college radio station. But the traditional route of college wasn’t for him — at least initially.

“I was really passionate about journalism and I knew that the Navy would give me that experience,” Baddorf shared. “At least that’s what the recruiter said,” he added with a laugh.

After basic training Baddorf was assigned to Okinawa, Japan, where he worked as a Navy journalist. “I was able to do video reporting about the military for the military across Asia and the Pacific,” Baddorf explained. “I had a really incredible experience traveling to places like Nepal, Kwajalein, Australia, Alaska and the Philippines.”

Following that experience he was sent to a ship where he continued his work in Public Affairs — until he deployed to Iraq.

“Part of the reason why I love journalism is those human stories that I get to hear and experience and to document history. And that was what really drove me to do it and that’s why I stuck with it for so long while I was in the military,” Baddorf explained.

Though he wasn’t doing the investigative reporting he became known for, the storytelling was important to him. “I really saw people in great need and people dealing with a lot. That changed me for sure,” Baddorf said. “It shaped how I view the world. It shapes how I view myself, it shapes how I view our country, how I view other people … just being exposed to the best and worst of humanity.”

After transitioning from the Navy, he didn’t go far from the Armed Forces. Baddorf spent a year in Afghanistan as a civilian working on remote bases for the U.S. Special Operations Command. This role had him working with Green Berets, Navy SEALs, Marine Corps Special Operations and Afghan security forces.

From there he trained radio journalists in South Sudan and served two years in the U.S. Peace Corps facilitating media development.

Baddorf spent over 15 years working as a freelance investigative journalist for the likes of The New York Times and BBC, among others. There weren’t many topics off the table, either, even when his reporting put him at risk, like when he was in Syria writing about the conflict.

“I’ve been targeted in places like Syria and Turkey and Pakistan, where the intelligence or security forces of these countries have gone after me because of my reporting and detained me,” he said. “I am a strong believer, as you might expect, in the freedom of the press and the importance of a free press in a democracy. And so for me, having that free and open environment is pretty critical and something that I advocate for as much as I can.”

One thing readers may be surprised to learn is though despite the big name publishing brands he wrote for, pay is poor for freelancers.

“Most people who are doing journalism these days are not doing it for the money because It’s not a profitable field. They’re doing journalism because they love it and they think it’s important,” Baddorf stated. “I think people would probably be very surprised that in my early days I was working for a nonprofit news organization and getting paid around $30 basically for a day’s work. And I was proud of it. Not of the pay,” he added with a laugh, “but with the body of work I created.”

Baddorf is also a passionate advocate of fighting disinformation and he’s spent his career ensuring his work reflected his commitment to truth-telling.

“I think it’s important when we’re consuming media, that we examine who is telling this story and that we trust that they’re going to do a good job based on what we know about them,” Baddorf said. “The editorial standards of each outlet, the experience and the background of the reporter. All these things should be considered when we examine news and that comes down to media literacy.”

“Trust in media is at an all time low as an institution. More than half of Americans think that reporters are more focused on spreading their ideology than spreading truth and truthful information,” Baddorf explained.

“I co-founded Military Veterans in Journalism in 2019 with a fellow veteran and we thought it would be just hanging out at a bar swapping business cards,” he laughed. “We didn’t expect it would become what it has been, which is a real professional organization with support from serious organizations like the Knight Foundation, Ford Foundation. And it has just grown and grown.”

The organization offers mentorship, both internship and fellowship opportunities, as well as access to career development events. The goal is to ensure there are more military veteran voices in journalism.

“We need to recognize the power of the media and the media needs to recognize what veterans bring to the table as well. So for veterans, I would say that they should tell their stories. They should become part of the conversation and we can help them to do that,” Baddorf said.

These days, he isn’t reporting. Baddorf spends his time working with the U.S. State Department as a Foreign Affairs Officer. His focus is counterterrorism related initiatives with a focus on sub-Saharan Africa.

Though this Navy veteran always aspired to take his dream of reporting far, even he is amazed with the journey he’s taken. Despite witnessing horrific humanitarian crises or the evils of war, he’s still hopeful about the world. “I think that there are different ways that media can be useful and powerful. I think one is documenting history. I think that’s important. We need to have a record. We need to make sure that we remember and we look back and reflect,” Baddorf shared. “I’m an optimist for humanity while also being realistic and pragmatic about all the terrible things that people do to each other. I want to do the best that I can with my limited time in the world.”