After war crimes acquittal, Navy SEAL Eddie Gallagher and wife share their story in revealing new book - We Are The Mighty 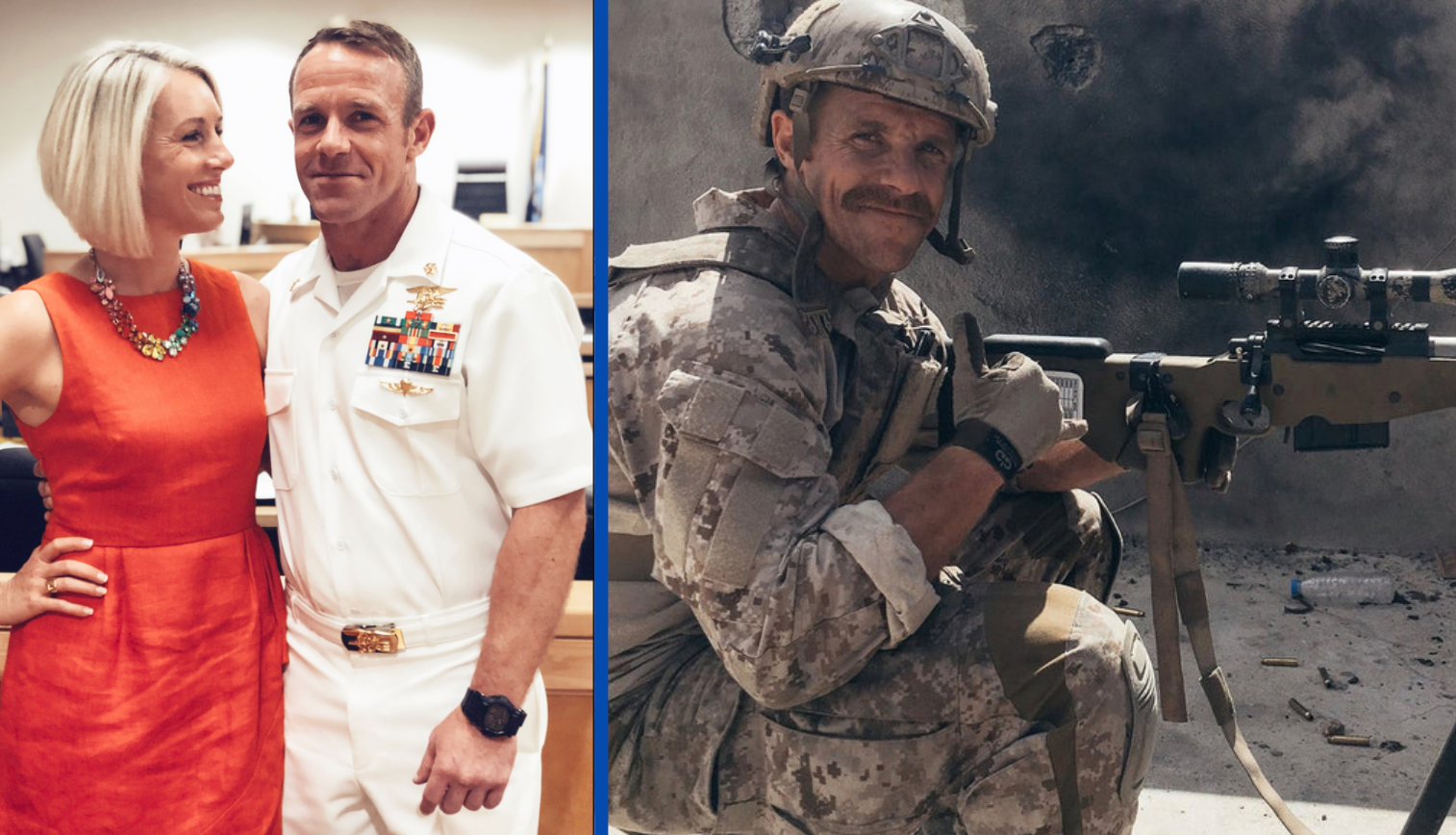 These are just some of the labels put on retired Navy SEAL Chief Eddie Gallagher by the news media before and after his highly publicized criminal trial. Following his acquittal of almost all war crime charges in 2019, Gallagher is finally ready and able to share his side of the story.

“What people don’t see is what goes on because of those articles and what that does to a family. We aren’t the only ones who’ve gone through it, either — it happens throughout the military,” he shared. The constant, negative media coverage wasn’t just a headache; Gallagher and his family were targeted with death threats.

It wasn’t an easy decision to write a book and share his experience, Gallagher admitted. He was clear in explaining the SEAL community’s opinion of operators going on to tell-all books and it wasn’t good. His brother, Sean Gallagher and Eddie’s wife, Andrea, were the ones to finally convince him he should do it.

In the beginning of the book, Gallagher addresses his feelings about making the decision.

“I wish I didn’t have to write this book. I wish no one knew my name or knew what I did for a living. For 19 years, I strove to be a quiet professional. Didn’t advertise the nature of my work. Kept my head down and did my job. I’d give anything to still be able to do that.”

The Man in The Arena: From Fighting ISIS to Fighting for My Freedom takes readers through Gallagher’s earlier years, the deployment which changed everything and his entire military criminal trial experience. Both he and Andrea wrote chapters in the book. But so did his brother, their children and other individuals involved. Gallagher was candid in sharing how before his own criminal justice experience, news headlines like his would have even had him believing the person accused must have been doing something wrong.

“It was a crash course for both [Andrea and me] as soon as we got thrown into it. You realize real quick that you have no rights especially as the active duty member,” he said. “Once you are accused of something you are told you are not allowed to say anything in your defense.” Gallagher referenced being told things like “trust the system” or “it’s better for you if you don’t say anything.” He said it wasn’t long before he realized everything he was told was wrong.

“They use our loyalty to whatever branch we are serving or institution we belong to against us,” he explained. “Once I was in there, they started denying me my legal visits, phone calls, certain stuff civilians are afforded. I was like, this is nuts and that’s when she [Andrea] stood up and said ‘this isn’t happening.'”

After watching what she called inadequate defense and stonewalling from the military, Andrea said she decided to take control. Her mission quickly became educating the American public, she said.

It was through her and Sean’s numerous media appearances that attorney Tim Parlatore eventually took over defense. Under Parlatore’s leadership, the initial military-led prosecution was sanctioned for violating Eddie’s constitutional rights, and one prosecutor was removed for illegally tapping Eddie’s attorney’s emails. Eventually, another SEAL would admit under oath he killed the Iraqi terrorist Eddie had been accused of murdering.

Andrea said, “It was a daunting undertaking but it was my honor to fight for him because he was fighting for our country all of those years.”

Gallagher enlisted in the United States Navy in 1999. He was attached to a Marine Corps unit until becoming a SEAL in 2005. He was a trained medic and sniper with combat experience in both the Iraq and Afghanistan wars. In the book, Gallagher wrote about his fateful deployment to Mosul, Iraq in 2017 as a chief of SEAL Team 7 and how it was actually safer than previous deployments. But it was still just as gruesome.

“Some days we’d watch ISIS gun down crowds of women and children as they tried to escape the city. The terrorists sent them running toward us and then opened fire in an attempt to draw us out. There wasn’t much we or the partner force could do except return fire from a distance.”

Scenes like the one above and worse are described often throughout the pages of the book, a stark reality for troops deployed to these regions. For Gallagher, who’d been deployed eight times, it wasn’t anything new. A bombing later on in that same deployment would lead to the apprehension of an ISIS terrorist as a prisoner of war and start a chain of events which changed the trajectory of Eddie’s life.

As readers comb through the book, they may wonder why Gallagher was charged with killing a verified ISIS terrorist in the first place. There were other charges against him that were also dropped but the accusation of murdering a terrorist stands out. Where and what is the line for our troops who deploy to defend? Rules of engagement tend to determine this line, but those rules can and do change. In the book, Gallagher addresses his issue with the inconsistency.

“War was war, and each of us accepted that there was a chance we might die, but handcuffing the warfighter made the possibility more likely.”

Gallagher also writes about his role as a SEAL and doesn’t hold back on explaining what it entails.

“We exist to eliminate the enemy, and everything else is just details toward achieving that goal. It’s not pretty, and I don’t expect the average American to understand what we do. But we relish being sent into combat, staging from the shittiest locations on earth, and completing the most dangerous missions. We’re not Boy Scouts.”

Despite everything he and his family publicly went through, Gallagher said he wouldn’t change anything. “I’m grateful I got to go overseas and fight for my country. No regrets; I got to work with the best men and women this country has to offer…my friends I’ve lost, those were giants among men. I am grateful,” he said.

Andrea echoed his sentiment. “We love our service members and military and just want to see it continue to go in a good direction,” she said. “We hope this book sparks an after-action report for the Navy and makes them say, ‘Maybe there are things we can do better.’”

Both said without the support of various nonprofit organizations, congressional members and fundraising events, it could have gone a very different way for Gallagher. Most military members aren’t typically able to afford the kind of legal defense he ended up needing. It is with this in mind the couple created The Pipe Hitter Foundation, a nonprofit dedicated to assisting military members, veterans and first responders in fighting for their legal rights.

As for the book, Gallagher and Andrea were committed to sharing everything, which is what led to putting QR codes at the beginning of many of the chapters, they said. Each code brings the reader to actual court recordings, NCIS interviews and what the prosecution deemed as evidence against Gallagher. He was clear in stating their goal was to be transparent in writing the book by giving readers the whole picture rather than just what was initially reported in the media. Both wanted readers to have the ability to do their own research to find the truth.

For Eddie, The Man in the Arena is his.