George W. Bush survived an assassination attempt because of a red handkerchief - We Are The Mighty

George W. Bush survived an assassination attempt because of a red handkerchief 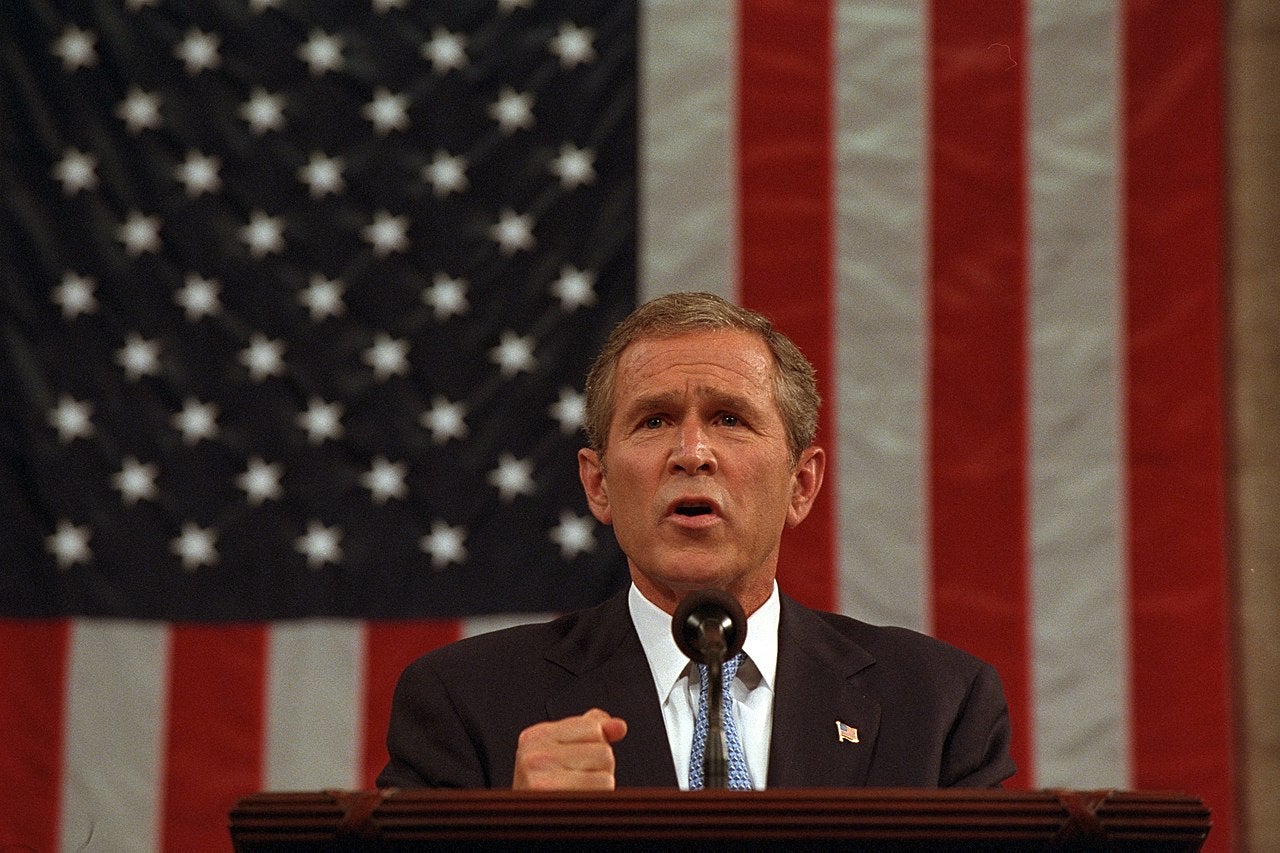 In an historic address to the nation and joint session of Congress Thursday, Sept. 20, 2001, President Bush pledges to defend America's freedom against the fear of terrorism. Photo by Eric Draper, Courtesy of the George W. Bush Presidential Library.

Of all the controversial policies and actions of the administration of President George W. Bush, the one that came closest to costing the president his life was his close relationship with the country of Georgia – and he didn’t even know it.

The job of President of the United States is maybe the deadliest job in the world. With four of the 46 officeholders being assassinated, another four dying of illness and others dying shortly after leaving office, it holds a staggering 18% casualty rate. In 2005, George W. Bush nearly became one of those casualties.

As President Bush and Georgian President Mikheil Saakashvili spoke at an event in the Georgian capital of Tbilisi, an unknown man tossed a live hand grenade, wrapped in a red handkerchief, over the bulletproof glass protecting the podium. It landed near the two presidents and their wives, but failed to detonate.

It also hit a young girl sitting on the stage. The motion was enough that a Georgian security officer noticed the object and was able to pick it up and remove it. When it was unwrapped, the security officials saw the grenade and that its pin had been pulled. But the tightly-wrapped handkerchief had prevented the striker level from releasing, so the weapon never went off.

Once the attempt had been discovered, the Georgian government called in the FBI for assistance and a countrywide manhunt had begun. The handkerchief was tested for DNA to confirm any suspect’s identity and investigators scoured the crowds. They didn’t see an obvious suspect, but they did see a man with a large camera facing the stage.

Once they tracked down the photographer, an American from Idaho, they now had more and better photos of the crowd and began to interview attendees. One woman, a Georgian, said she’d seen a man wearing a heavy coat in the crowd that day, muttering to himself and carrying a red handkerchief. With her description, they could identify the man in photographs.

Using the Idaho’s man’s photos, investigators found the man fitting the Georgian woman’s description and a hotline was set up with a reward for information that would lead to his successful identification and capture. The hotline worked. A tip from the phone number led Georgian security officials to the home of Vladimir Arutyunian.

When police arrived at the house where Arutyunian lived with his mother, a gun battle broke out, killing Zurab Kvlividze, the head of Georgia’s counterintelligence department. The suspect fled into the woods between his village and the city of Tbilisi. It wasn’t enough to keep the police off his trail, however, and he was soon captured.

Security officers found a trove of potential terror strikes in the basement of the suspect’s home, including mercury, sulphuric acid and other chemicals and explosives.

Arutyunian was wounded during his capture, but confessed to the entire attack from his hospital bed. He claimed to have thrown the grenade hoping it would have exploded over the heads of the officials on the podium, inflicting maximum damage to both presidents and their families. His motive was anger at the Georgian government for becoming what he believed was a puppet of the United States.

The suspect initially pleaded not guilty and refused to answer questions in court. The defense argued that there wasn’t enough evidence, considering Arutyunian’s fingerprints were not on the grenade, but the DNA collected from the handkerchief matched his and he was sentenced to life in prison.