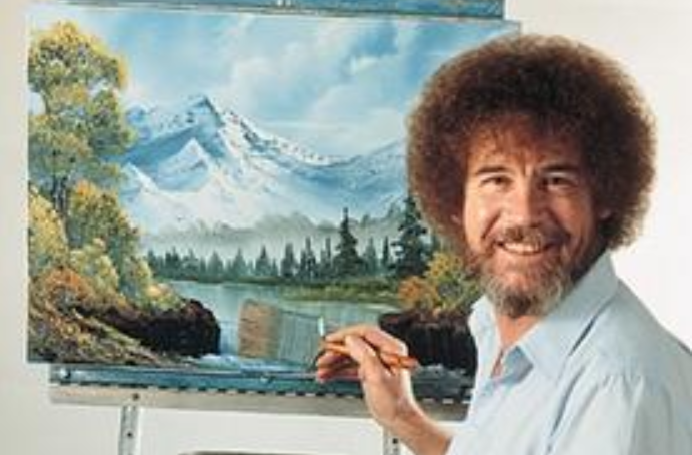 Before he was teaching folks how to paint beautiful landscape sceneries, the late artist Bob Ross served in the U.S. Air Force. In fact, it was where he gained his inspiration for future paintings.

While working as a first sergeant at Eielson Air Force Base in Alaska, Ross is said to have been acquainted with snow-capped mountains that made regular appearances in his paintings. He began painting them during work breaks, where he was able to create a fast technique that allowed him to make art, even with little downtime.

One of the things Bob Ross is known for is his calm and quiet demeanor. This can also be traced back to his time serving in the military. He said, with his role of keeping others in line, he had to be mean. “[I was] the guy who makes you scrub the latrine, the guy who makes you make your bed, the guy who screams at you for being late to work.” Because of this, he vowed to raise his voice once retiring from the military. This, of course, led to his signature of speaking softly.

The beginning of a military career and a love for art

At 18 years old, Ross enlisted. It was 1961 and after basic training, he was given a job as a medical records technician. He served for 20 years, retiring as a master sergeant.

After going to a U.S.O class in Anchorage, Ross began painting as a hobby. However, he soon found that his style differed from his instructors, who were more apt to create abstract pieces. He later found a television show called The Magic of Oil Painting. The show’s unique style, led by Bill Alexander, a German painter, taught Ross to paint quickly. The method is commonly known as “alla prima” or “wet on wet,” allowing the artist to create an entire painting in 30 minutes. This is the same method that Ross would become famous for in his own right.

With the help of the show, Ross studied the technique and began adding his own skills, creating an entire style of landscape painting. He began selling his paintings and quickly found success, even making more from his paintings than he did from his Air Force salary.

In 1981, he retired from the service and turned to painting full time. Ross soon returned to his home state of Florida and joined his mentor, painting coach Bill Alexander, as a salesman and tutor for his brand, Alexander Magic Art Supplies Company.

Bob Ross Inc. incorporated his signature permed hair into its logo. Because of the popularity, Ross kept his permed hair going forward.  Through the company, he was able to gain popularity and star in The Joy of Painting, which aired for 12 seasons on PBS from 1983-1994. The show allowed Ross to teach his own style of painting, narrating how to achieve certain results while using the wet-on-wet technique. His son, Steve, also appeared on the show and eventually became a Ross-certified painting instructor.

Ross passed away in 1995 from complications of lymphoma, leaving behind a $15 million business in art classes and painting supplies. His shows still air on PBS reruns, continuing to teach the masses his landscaping techniques. To see him at work, check out the following video: