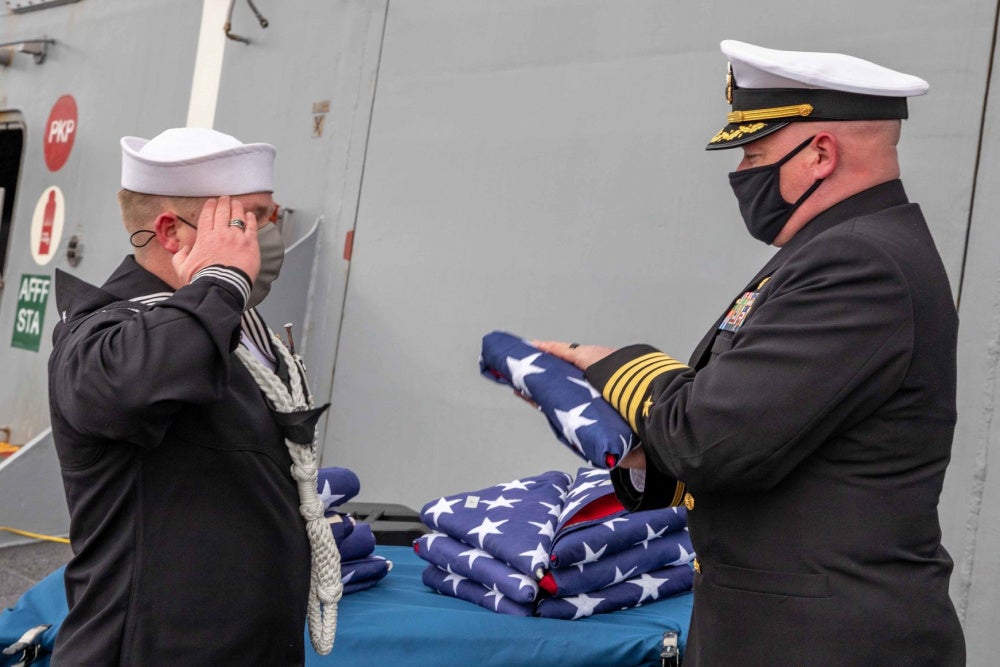 For many, it will come as a surprise that it’s so simple to bury a deceased loved one at sea, with little more than sail cloth and some weights. All you have to do is ensure you have all the necessary permits for transporting the human remains and a boat.

When burying someone at sea, it’s important to note that a military burial beyond what you can provide amongst your family and friends (or chartered boat service) isn’t possible. You’ll need the Navy’s help to do that, but family won’t be allowed to be present.

Read: These are the Navy’s rules for being buried at sea

The first step is getting familiar with the Marine Protection, Research and Sanctuaries Act, which affords a general permit from the U.S. Environmental Protection Agency for “dumping of certain materials that will have a minimal adverse environmental impact and are generally disposed of in small quantities.”

This general permit allows for the transport and burial of human remains in the ocean under specific conditions. The remains have to be dumped at least three nautical miles from shore and you can dump things that won’t decompose along with them. These are things like plastic flowers and wreaths.

You’ll need a permit to move the body to the boat (your funeral director can help with this part) and you’ll need to prepare the body for sea by either using a non-plastic casket or some kind of natural fiber wrapping affixed to a weight for easy sinking.

If using a casket, a specific series of holes must be drilled so the box fills with water and offsets the buoyancy of the body. The casket must be wrapped with 5 steel bands or chains, four around the width of the casket and one wrapped lengthwise. Additional weight in sand or stone must be added so the entire casket weighs at least 300 pounds.

In either case, remains must not be visible.

The EPA also has some other, important regulations regarding civilian burials at sea.

There is no form or application required for conducting your own burial at sea, but the EPA must be notified within 30 days of burial using the Burial at Sea Reporting Tool.